*The image above is from Singapore.

We’ve known for a long time that the jungles in Malaysia are no longer safe for wildlife animals because of human invasion. Acres of greens are increasingly decreasing. How sad it is that animals can’t even roam freely in their OWN HOME any more? Unfortunately, animals cannot run away to another safer jungle and claim refugee status like people. As we keep logging and logging, we’ve split ONE WHOLE Peninsula jungle into two parts. It be like So what happens when a jungle gets split into two? The animals get stranded, of course! Some are stuck in Zone A and some in Zone B. But sometimes Zone A animals need to get to the other side because their mating ground is there, and vice versa. What if their soulmate is on the other side? 😥

The solution to this problem is to build something that will allow all the animals to cross over to both sides sesuka hati. So, build what? Tram? Cable Car? Travelator? Just kidding! We are building a BIO-BRIDGE! A bio-bridge is a bridge that connects one wildlife area with another, to allow animals to safely cross human-made barriers (ie. highways or, in our case, palm oil plantations).

Bio-bridges, also known as wildlife crossings, are a GLOBAL thing now. The Netherlands is leading with over 600 wildlife crossings. The structure doesn’t necessarily have to be an overhead bridge though, sometimes it can be underground tunnels. This is what an actual bio-bridge looks like: But we’d like to think of it as a ‘love tunnel’, because the reason we’re building one in Malaysia is not just for safety, it is MAINLY to ensure endangered animals meet their soulmates! ❤

You see, the Endau-Rompin Landscape (ERL) in Johor and Pahang has been heavily logged and cleared to build farms and commercial agricultural plantations. Obviously, animals are not gonna pass through human occupied areas coz they are scared. This is habitat fragmentation

The target is to build 75 MILLION square metres of bio-bridges by 2020!

WHOOAA that’s a lotta square metres! To give you a point of reference, here is this doggy is sitting inside 1 sqm. So times 75 million doggies. 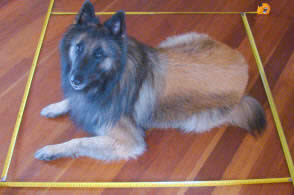 The company sponsoring this is The Body Shop, under their ‘Enrich Not Exploit’ campaign. A lot of companies are doing CSR nowadays to do their part for society, so The Body Shop wants to do its part too. BTW, this isn’t a sponsored article ya.

Initially they began their campaign in Vietnam in June, this year. They got people to help Reggie, a red-shanked douc (a type of monkey), find ‘THE ONE’. In other words, sponsor a bio-bridge so that Reggie can cross over to more parts of the jungles to find mates. Red-shanked doucs live in the Khe Nuoc Trong forest of North Central provinces in Vietnam. But the problem Reggie and his kind are facing is ending up on somebody’s plate. Doucs are a delicacy on the local menu, so they’re poached for food, plus fur and use in Chinese medicine. It has been six months from June to November, but they have completed more than 10 million sqm of bio-bridges, woohoo! Due to their success in Vietnam, The Body Shop decided to campaign in Malaysia and Indonesia as well. In total, they are aiming to donate £200,000 (RM1 mill), to be split between the three projects, with 58% going to Vietnam and 21% each to Indonesia and Malaysia.

NAH, BACA:
Europe is banning palm oil? Here's one BIG effort from Malaysia that they might have overlooked...

So if you’d like to help them build the bio-bridge, throughout Christmas, buy their gifts to contribute towards 1 square metre of rainforest. Speaking of Christmas, here are some singing animals 😉

Vietnam wants to protect doucs. But in Malaysia, it’s all about Harimau Malaya.

Not the football team 😛 The real Malayan tigers. We can’t stress enough that our tigers desperately need to be protected NOW, because there are only an estimated 250-340 Malayan tigers left in the wild, according to the World Wildlife Fund (WWF). The National Tiger Action Plan for Malaysia identified three priority areas, and one of them is…you guessed it…Endau-Rompin.

Unfortunately, like we mentioned, a sizable chunk of the forest has been replaced with farms and plantations. Tigers that venture into human territory tragically get shot sometimes as retaliatory killings by farmers, because tigers attack humans. At least one or two tiger attacks are reported each year and most human-tiger conflicts happen around villages (35.5%) and plantations (25.5%).

Dr. Kae Kawanishi, Head of Conservation for the Malaysian Conservation Alliance for Tigers (Mycat) said that if rubber tappers see a tiger in the morning, they would call the Department of Wildlife and National Parks Peninsular Malaysia (Perhilitan). “Why does Perhilitan have to catch the tiger when the area is a tiger corridor?” she questioned. Actually, if you’re a tiger lover, you can volunteer or donate to Mycat too.

So the bio-bridges will ensure that tigers don’t accidentally wander into human territory while roaming from one end of the jungle to the other, looking for mates or whatever. Two tigers, separated by farms and plantations. A tragedy. Image by Jake Leong, from The Body Shop

On top of that, poaching is another threat, despite the punishment being quite heavy (RM500,000 fine and a mandatory jail sentence under the Wildlife Conservation Act 2010). In fact, one downside to bio-bridges or other wildlife corridors is that it creates a chokepoint that poachers can target.

To combat this, The Body Shop funding the Wildlife Conservation Society-Malaysia (WCS-Malaysia) for five years, to set up anti-poaching patrols. One day, the use of drones and satellite images could in future help to save the Malaysian tiger from total extinction.

Ultimately, the systematic destruction of our jungles still must STOP, or else habitats will get smaller and smaller, making it easier for poachers to catch prey. That is a whole other discussion which we won’t get into now. But something like that will require cooperation from the Government, police, local authorities and villagers.