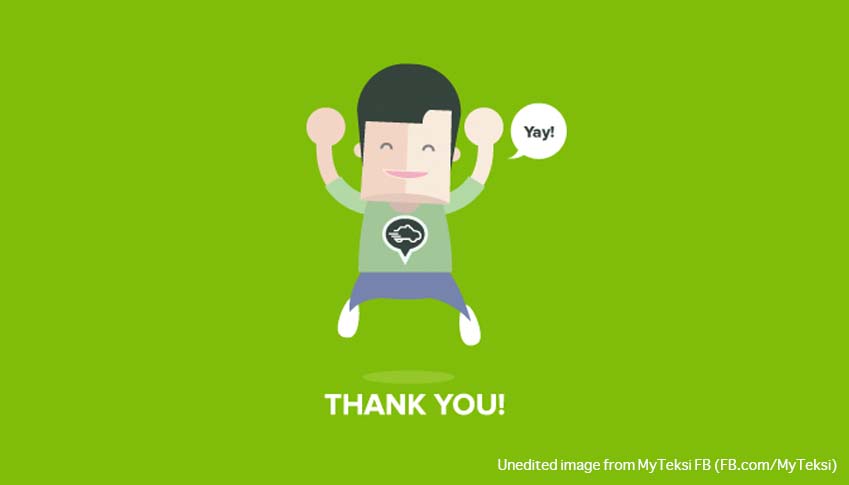 Get this. MyTeksi (called GrabTaxi outside Malaysia), a humble lil company founded by two Malaysians, have received a whopping US$250 MILLION investment by Japanese telcom giant SoftBank. That’s RM860,000,000.00, guys! Could it possibly be the biggest investment for a startup in Asia??

Coincidentally, this news broke just a day after our CILISOS x MyTeksi Urbanscapes Bingo contest… Trust us, the few of us were OMG-ing in the office. It’s really quite something to realise that we’re associating ourselves with this incredibly successful and promising name.

Now, million-dollar investments for startups aren’t new (just ask the peeps at Rocket Internet, a German company with biz in SEA and HQs in Singapore a.k.a. the guys behind Zalora and Lazada), but we’re all excited about this ’cause MyTeksi’s story is, truly, a Malaysian inspiration.

Two Malaysian graduates from the Harvard Business School saw two problems, two problems everyone complained but could do little about: passengers couldn’t get taxis when needed and they were worried about their safety. They came up with the idea of MyTeksi to answer the cry of the people, and having won the 2nd spot at the annual HBS biz plan competition, they set out to conquer Malaysia, then the rest of Southeast Asia, with the region’s leading smartphone taxi app.

MyTeksi is known as GrabTaxi in areas outside Malaysia. Screencap from MyTeksi’s website

Check out the brand’s massive growth since its first days in June 2011: Less than two month after announcing their Series C funding (a.k.a. ‘third round of funding’ for us biz n00bs), we wake up to news about THIS gigantic financial boost. So this begs the question…

Where does MyTeksi sit with other Asian startups?

Comparing single-round fundings from companies that are less than five years old (hence ‘startup’), we prowled biz magazines like e-Sherlock wannabes to bring you this countdown.

P.S: If we’ve missed out on anything, please buzz us and we’ll gladly put ’em in. You know we’re bad with numbers (but we’re trying!).

So, how just fast is the startup scene here?

With so many startup conferences held across Asia, especially in Southeast Asia, it’s evident that the scene is growing in leaps and bounds… Probably at a pace that might be a little hard to keep up with. Silicon Valley, which has become way too populated with successful and not-so-successful startups, is in a way directing venture capitalists in our direction.

Through our research, we found that India has been getting a HUGE influx of funds and is seeing great growth. It was pretty surprising to us that India had so much more investment than China, but admittedly, this could be because CILISOS writers can’t read Chinese, OR, because they’ll soon have a bigger human population than China, and a much more open market as well.

Singapore is said to be the No. 1 country for startups in Southeast Asia, bringing in US$454 million compared to US$918 million invested in the rest of SEA. Tech in Asia adds that the country “probably has the most developed startup ecosystem in the region, with a handful of growth stage startups and many more in angel or seed stage”.

NAH, BACA:
Does this Maxis/Grab collabo mean Pokemon Go is coming to Malaysia?

We’re not business experts, but we’ve been getting nugget-sized news about this startup and that startup and who did what when how… The fact that these nuggets show up so often on our social networks show just how big and fast the industry is growing.

There is support almost everywhere you turn – governmental grants, MORE venture capitalists, resources, budding entrepreneurs… Flash back fifteen years and chances of being entrepreneurial might just give our folks a mini heart attack.

“Do your own thing? Siao ah! Go work for people in an office! Safer!” – moms back then, probably

Back to MyTeksi. So, our homegrown brand sits at number 5? Not too shabby, not too shabby at all. It’s really quite awesome to see something Malaysian doing well ’cause they instantly inspire the rest of the country.

But what we’d really like is to see more of these amazing success stories from our fellow Malaysians, made IN Malaysia, making Malaysia proud… SAYS.COM has already listed out 20 Malaysian startups that you should check out here, and with CILISOS being a startup ourselves, we can tell you that the feeling of starting something new is pretty darn exciting.

There are all sorts of local grants and global crowd-funding sites any budding entrepreneur can check out to help kickstart their crazy ideas. Plus, the gomen is also collectively doing their best to push the country towards the high income nation model. While universities are quickly furnishing themselves with the facilities for startups, we’re also not lacking of workshops to mould them for their future.

All in all, the scene is bursting with life and potential and all the support one needs to bring forth concepts. We can’t wait for more Malaysian startups to take centre-stage.

Before we end, let’s just quickly recognise this. Most startups focus on problems and find the most effective way to tackle them, right? Like how MyTeksi saw the problems we faced with our local cabbies? Well, here’s a probably un-comprehensive list of other problems we face…

2. We can’t stop pressing the snoozing button… Even if our alarm clock is some Rubric’s cube thing.

3. The heck are our keys/phone/book/cat? Always cannot find them. Perhaps something to record our movement in the past 3-4 hours?

4. Always dunno where to eat. Yeah we have tonnes of sites to help us but.. Um… We still don’t know where to eat. Perhaps cos the answers don’t always tailor to our preferences?

5. When we’re on the move and need to berak, we don’t know where we can go to find clean, comfortable toilets. (This one is pushing it a bit la)

6. Not sure if the things we write are seditious or not. Can someone do a sedit-o-metre? (Seriously)

7. Aaaand a pocket lawyer would be nice too.

Can someone please jump in and start something? Kthnxbye!