[UPDATE 22 OCT 2017: A few days ago (15th Nov), it appears that the fuel prices are still climbing, and not just by one or two cents. In the period from the 16th to the 22th of November, the fuel prices rose by 7 cents, the same as the week before that (9th Nov to 15th Nov), which amounted to a 14 cents’s rise within two weeks.]

While yesterday it had been announced that fuel prices will be dropping 2-4 cents this week, the gomen have been announcing a rise in fuel prices weekly since April. It doesn’t matter whether it’s RON95, RON 97 or diesel, they all went up. It would seem that until yesterday, for the past 10 weeks the prices of RON95 and RON97 made like Taio Cruz and kept going higher, higher, higher off the ground. 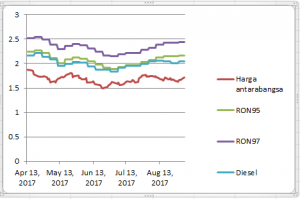 However, as any recurring Cilisos reader would know by now, it would be wise to not jump to conclusions, as there are probably valid reasons why this is happening. The global oil prices in the graph above are actually the prices of crude oil, and Malaysia didn’t use that to determine fuel prices. So what do we use?

We didn’t use the price of crude oil, we use MOPS. 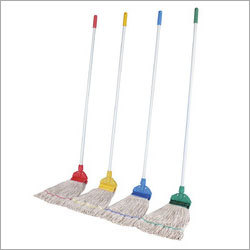 But seriously, what is MOPS? It’s short for the Mean of Platts Singapore, which is an index of prices that fuel buyers refer to as a benchmark in determining the price of processed petroleum products. The MOPS index is handled by a Singaporean company named Platts, so it’s no wonder that Singapore became the biggest supplier of processed petroleum products in Asia Pacific, and the third largest in the world.

There are two other indexes used when considering fuel prices, and they are the New York Mercantile Exchange (NYMEX) and the London Stock Exchange (LSE). However, MOPS’s values are more commonly used for fuel prices as unlike MOPS, NYMEX and LSE are based on crude oil prices. This is the reason why the MOPS’s values are a bit higher than NYMEX and LSE. Our gomen, like many others, also uses the MOPS to determine oil prices.

Unfortunately, MOPS prices aren’t available to the general public, as it’s a paid service. But if you really, really want to check out the MOPS data, you can try referring to the Australian Institute of Petroleum’s website. The prices quoted here are in Australian Dollars though, so if you want to try calculating the petrol price yourself, you’ll have to convert it to Ringgit first.

But just knowing the MOPS value won’t do much in determining the current fuel price. To do so, there’s a formula and several other things you need to factor in, and this process falls under something we call the Automatic Pricing Mechanism (APM).

Break out the sempoas, it’s time for some math!

Using the APM formula, we’ll be introduced to a few other numbers:

As can be seen, of the five components needed to determine oil prices, only the MOPS averages are constantly changing according to the market. The formula is pretty easy, so we weren’t joking when we told you to break out your sempoa. Just add these five things together:

Now that the theory is over and done with, let’s move on to the practical stuff. To calculate the price of RON95 for this week (7 September to 13 September 2017), you have to refer to the MOPS rate for the previous week (31 August to 6 September). This is because MOPS is a type of swap, which means that each week’s MOPS value is like a prediction of what it’s gonna be the next week, so… just use the values from the week before the week you’re calculating for.

Then, you’ll have to convert the MOPS rate to the previous week’s ringgit value, as the MOPS value is in Australian Dollars. In this case, the exchange rate can be estimated to be 3.41.

Substituting that into the above equation will give us:

This would mean that the price for RON95 is actually RM2.18 per liter, which is two cents less from the price announced by the government, which is RM2.20. Fuel prices can also be tied to the current value of ringgit, as it’s also related to currency exchange rates. Here’s a nifty way to predict fuel prices with respect to changes in MOPS and the ringgit:

But here’s some bad news. There’s a chance that the method we used just now… may not the method the gomen’s been using all this while. Despite requests from various parties, as of the time of this article, the government has yet to reveal how they really calculate fuel prices.

Perhaps all we need is a lil’ bit of transparency That’s why you get an E for Add Maths. Source

Before this, economists had pushed the government to reveal how fuel prices are calculated, but the government is still shy shy and refused to show us the jalan kerja. We’re still waiting for that fuel price formula promised last June, btw.

On another note, a group of scientists from the USM managed to invent a capacitor that can reduce petrol use by up to 46%, and you can read about that and a few other sweet Malaysian inventions here. It is hoped that this device can soon help to reduce the daily living cost of Malaysians. At the same time, what we can do is to be smart in handling our finances to make it through these trying economic times.