[Update 20/1/17: The IGP recently confirmed that Datuk Bahri is under police investigation, not for anything related to 1MDB, but because his wife’s sister-in-law, Noraihan Che Ali, lodged a police report against him, saying he used his abused his power as an MACC officer.

As the story goes, Noraihan’s husband passed away and left a substantial inheritance to her. However, she claimed that Datuk Bahri used his MACC position to confiscate a few documents from her home, and pressure her to sign away her inheritance to Datuk Bahri and his wife.

“They urged me to sign a letter to give up any claim on the property, and even tried to get my son to give his fingerprint although he is only 9-years-old and is an orphan.” – Noraihan Che Ali, Datuk Bahri’s wife’s sister-in-law, as quoted by Malaysian Digest

Though these allegations do deserve to be looked into, the strange part is that she says she had lodged a police report over a year ago, but it’s only now that the police have decided to look into it. As we like to say, the thot plickens.]

A few months back, it was reported that the chief of the MACC, Tan Sri Abu Kassim Mohamed, was stepping down. It was quickly speculated that he was pressured to resign but the man himself said that it wasn’t.

Fast forward a few months, and we find that the replacement MACC chief, Datuk Dzulkifli Ahmad, was actually cracking down on quite a number of high profile corruption cases. So we were quite surprised when just after the turn of the year, we started hearing news that another MACC chief had resigned.

At first we thought that some old news had been circulating again (that happens occassionally with us), but eventually we realised that the guy who resigned was a completely different officer, Datuk Bahri Mohamad Zain, director of MACC’s Special Operations Division. 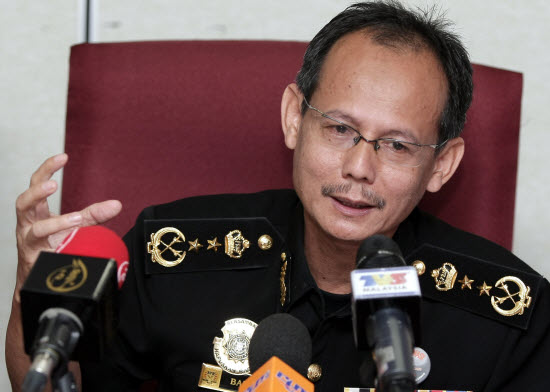 Cheh, so some random officer is just retiring? Well that is exactly what we thought at first as well, until we found out that his reason for retiring had caused quite a stir.

He left the MACC because he felt he had disappointed Malaysians

Datuk Bahri actually had 3 years to go before his retirement. But it was the reported that the 57-year old had chosen to go for an early retirement because he was “disappointed” at how a particular case he was assigned to had turned out.

“I’m supposed to retire in 2018, two more years of service, but this decision was made because I felt that I had disappointed and sinned towards 30 million Malaysians.

Hold up, what in the world is the SRC case? For those of you who’ve never heard this name before, it’s actually not a small case because it’s associated with one of the most used words in Malaysia’s vocabulary. As we mentioned earlier, Datuk Bahri is the director of MACC’s Special Operations Division. And one of the biggest cases in his purview involved a company called SRC International. SRC International was formed in 2011, and for about a year it was considered a subsidiary company of 1MDB (meaning 50% of it is owned by 1MDB). But it cut ties with 1MDB in 2012 in order to get a loan from one of our retirement funds.

And the company actually kept a really low profile until 2015 when WSJ came up with their really long article about 1MDB, in it claiming that the company was part of plan to transfer RM42 million into our PM’s bank account. And barely a day after the WSJ article, the MACC said it would begin investigating SRC. Not long after that, the MACC together with the police, raided SRC’s office and confiscated documents and computers.

This alliance didn’t really last very long, but with the end of their kerjasama also sees a rise to prominence of Datuk Bahri.

As far as we can tell, Datuk Bahri’s name first started to appear not long after WSJ’s article. When the MACC started investigating SRC, the police actually raided the MACC office and started taking in some of the MACC guys to question them. Datuk Bahri was among them, and he was not happy at all.

We do not have time to play politics as we are doing our job as entrusted by the public on what they expect us to do with regard to this investigation.

You may have (political) powers, but I have Allah.” – Datuk Bahri Mohd Zain, as quoted by MalaysiaKini

His words did not sit well with some people with an UMNO website dedicating a whole article about how he was unprofessional with his words. Coincidentally, just a few days later it was reported that Datuk Bahri (and another officer) was transferred to the PM’s department, and some claimed that this was due to “disciplinary issues”. You can see him waving goodbye to his colleagues at the end of this video.

NAH, BACA:
Latest scam is an SMS list of "JPJ samans". But then JPJ officers got the SMS too :D

But just 2 days later, it was reported that his transfer had been cancelled due to the gomen being satisfied after they explained their comments to the media, and the MACC said he would continue his investigations. And news about Datuk Bahri would go quiet until January 2016, when our Attorney-General (AG) ruled that the money in our PM’s account was not corrupt, but a gift from Saudi Arabian royals, meaning the case would not go to court.

Right after the AG’s verdict, Datuk Bahri said that it was highly likely that the MACC would appeal to that decision. Alas, from that point on the only progress we see on the case is gomen officials claiming that no evidence had been found by the MACC, and that if they wanted to appeal they could, but the final decisions would still lie with the AG.

And it all stays quiet until the news that Datuk Bahri had chosen to retire early.

Not long after the news reports that Datuk Bahri said he resigned because of his disappointment, the MACC quickly released a statement of their own to counter what he said.

“No one had forced to retire, like some quarters claimed, that is not true, never happened … it was entirely his personal choice.

He had expressed his plan to retire since last May (2016).

We have contacted him and he has denied issuing such statement to the news portal.” – MACC Deputy Chief of Operation, Datuk Azam Baki, as quoted by Astro Awani

And naturally, people wondered why the MACC had denied it, especially when unlike the previous time an MACC officer resigned, this time Datuk Bahri did not come out and say that what was reported was untrue. In fact, Datuk Bahri later said that no one from the MACC had contacted him, contrary to what the MACC said.

Could Datuk Bahri’s story be pointing to something bigger within the MACC?

Here’s another plot twist that we figured out while writing this article. This isn’t the first time we’ve mentioned Datuk Bahri. We once wrote an article about how it looked like the MACC really wanted to tell the rakyat the secrets of 1MDB, we do mention Datuk Bahri. In fact, he was on our feature image! When the police raided the MACC office in 2015, the MACC actually said that it inteferred with their investigations (something that is actually an offence under Section 48 of the MACC Act 2009). And in the days leading up to 2017, it was also reported that the MACC division that investigated SRC was allegedly being downsized, and 6 of the officers involved were being transferred.

Organisations like Transparency International and the Governance, Integrity, Accountability and Transparency (Giat) coalition have brought up how no one should not stand in the way of their investigations. And while currently it seems that the Datuk Bahri story is still developing,perhaps we should consider that this, and other examples mentioned above indicate that the MACC has not been allowed to do their job properly.