It was an interesting morning for us at CILISOS today thanks to a video that’s been floating around the Facebooks called the “Malaysia Nude Sports Games 2014.” Facebook’s posting guidelines prevents the actual video from being shared, but a quick Google search is all you need to get the video. But since you’re here reading this, we’ve done that for you.

Of course, there will be nudity involved (obviously) so please don’t watch it on the LRT or something. Also, if such content or discussions aren’t your thing, please click here to be redirected to something less provocative.

We cannot stress enough how NSFW this is. Click at your own risk.

Here’s the link. [Edit: The video has since been taken down, but has since been reposted elsewhere. To respect the privacy of the people involved, we won’t be displaying the link but you could probably Google it up. Just sayin’]

[Edit of edit: If anyone involved in the video is reading this, we’ve included screenshots from the video in the article. Let us know if you want them taken down.]

Okay. So this is where we ask those of you who watched it: Did you laugh? Did you cringe? Did you ask “Omaigawdwhaiiiiiiiiiiii???????”?

We did. But then we asked ourselves why we reacted that way.

Yeah sure, it’s so easy to post the video, make a few puns, and wait for the shares to come in. After all, this has all the bare signs of a viral video. (See? Easy.) 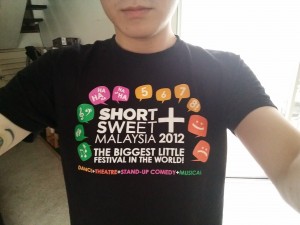 The irony of the shirt I was wearing wasn’t lost on my colleagues either.

I mean, these people are asking for it, aren’t they? Sexual deviants who are the result of the pencemaran budaya plaguing our country with no sense of shame or decency. Let’s shame them and spread it on Facebook. Oh heck, why not just find out who they are and post their addresses up online for social justice to take place?

Except that they’ve been doing it for awhile, and nobody knew about it. We think the pains they go through to not expose themselves to the general public has something to do with it. There is a written chronology of the event in the video description, and here’s something they mentioned:

As we reached the hut, suddenly a boat appeared from the sea and arrived at our beach. We quickly dress up just in time and later found out that the men in the boat actually brought our meals for dinner.

Okay, stop beating around the bush. What’s this all about?

The people in the video probably belong to a naturism or nudism movement. Yes, movement. As in there are organized groups of people doing this-wan. Nudism is defined as the act of being naked within the defines of their home or community and has no undelying philosophy beyond the freedom of being nude while naturism is nudism with philosophy. In actual practice though, the terms are used quite interchangeably depending on the groups involved.

It’s not a new thing too. Ancient civilizations such as the Egyptians and Romans have culturally embraced it, and it has been both embraced and reviled over time for social, political, and religious reasons. The Young Naturists America has covered the history of nudism which you can read about here.

This naturism/nudism group has previously organized excursions to “Mt. Cheras” (We don’t know if they meant Bukit Putih, but that’s what they tagged it as) in 2012 and other video posts in the Vimeo user uploads also show an attendance at the International Naturist Conference in 2013 and 2014. 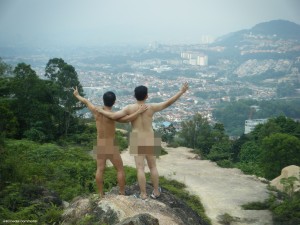 Mt Cheras, according to the description.

This isn’t only taking place in Malaysia BTW. There are other Asian countries that cater to this lifestyle in a legal to semi-legal basis. You can find a whole list of them here.

So these people are all perverts la!

Wellll….. it depends on how you look at it. As it turns out, there’s a group for Malaysian and Singaporean nudists (we aren’t sure if they’re part of the ones in the video) and they have a website and forum (now taken down). Most people involved in these movements have a strict code of conduct or etiquette. Some of the basic ones (paraphrased by us) are:

Really, in all respects it sounds much more civil than a Friday night in Changkat.

As far as to why they do it, it’s kinda like asking why someone dresses a certain way or why they prefer one brand of bottled water over another – it’s varied and mostly personal. Some participate to recapture the innocence of youth, as a form of freedom from social conformity, as a way to gain a better sense of confidence, to reconnect oneself with nature, or  even something as simple and primal as wanting to display a body (or body part) that they’re proud of. 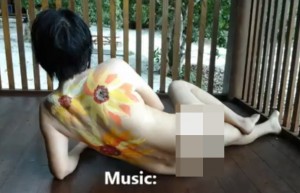 In this case, we’re gonna say to get closer to nature.

Again, we have to ask ourselves why we’re reacting this way to a bunch of naked people having fun in a safe, private environment. An opinion presented in The Examiner mentions that it may be related to how we view nudity:

How can they allow this here?

To be honest, we can’t tell for certain what the legality is here so we checked in with Fahri Azzat of Loyarburok for a more informed opinion.

The Nudism Malaysia site states that while public nudity is illegal, it isn’t technically illegal to be nude. They cite Malaysian law Act 336 (Minor Offenses Act of 1955) clause 28(e) where it is an offense for:

Exposure of person with intent

(e) every person willfully, openly, lewdly and obscenely exposing
his person with intent to insult any other person;

Considering that their events are private and away from the public with measures taken to prevent the involvement of non-members, they should be within the bounds of the law.

…being nude in Malaysia is only an offence if you purposely, openly, lewdly, obscenely, and intentionally display your genitals (or your nude state) to others with any intention to insult them. …I would say the incident fails the test of section 28(e) because there was a lack of intent.

However, our friends at The Rakyat Post reported that the matter is being investigated under Section 509 of the Penal code for words or gestures intended to insult the modesty of a person.

On this, Fahri says:

I don’t think section 509 of the Penal Code applies. That provision makes uttering words, making a gesture or exhibits an object that insults the modesty of a person with the crucial condition being that it was intended that those things be seen by the person. In this case, it’s hard to imagine how a bunch of people who enjoy frolicking in the nude insulted the modesty of someone. From the report, it appears that no one else was offended when the nude frolicking was in progress. The outrage only came about when the video of it was uploaded after the event. There isn’t any provision in the Penal Code that makes nude frolicking in their own company albeit in a public place an offence. I am not sure whether there are any bylaws made for that area that makes public indecency an offence like Section 8(1) of the Parks (Federal Territory of Putrajaya) By-Laws, 2002 does.

So what’s all the fuss?

This incident reminded us of another incident back in June this year where an episode of Naked and Afraid – a reality show where one male and one female participant had to survive in the wilderness naked for 21 days – was shot in Belum State Park, Perak. Now, it wasn’t as if the producers secretly filmed the show – they were granted permission to do so by the Perak state government based on a recommendation from Puspal (Central Agency for the Application of Filming and Performance by Foreign Artistes). Although the show is only meant to be aired in the United States, promotional footage on the internet quickly made its way to – surprise surprise – the Facebooks and prompted Puspal to act. As in act on the issue, not in the show.

The funny thing is that an episode of the same show from an earlier season which took place in Sabah didn’t generate such buzz.

So what made the difference?

Maybe it’s because it’s Sabah and we don’t care about Sabah? Nahh… probably not. We think it’s because the promotional material mentioned “Borneo” in the title rather than “A Malaysian rainforest”. Perhaps they didn’t have a strong marketing campaign. And most likely, the video didn’t make it’s way to the Facebooks and thus into local public scrutiny.

We don’t know what prompted the organizers of the Malaysia Nude Games 2014 to post that video for public viewing. Perhaps they wanted to share it with other members of the community, not intending for someone to come across it and share it out to the rest of the world. Or maybe they wanted their movement to be a little more open to the public. But whatever it is, the user has since removed that, as well as all other nudist-related videos in the account; and we’re willing to bet that they’ll be even less public from now on.

[Edit: Since they have removed the video, we think it might be an indication that the video wasn’t meant for public consumption]

How are Malaysians taking it?

We’re not gonna lie. We expected a fair bit of backlash and outrage over this and indeed we kind of took the direction of going into the topic of Asian values such as shame and judgement.

Many Malaysians on The Rakyat Post’s Facebook page have been quite supportive, or at the very least, unfazed about this. Even on this writer’s personal page, we’ve been seeing posts such as these: Well, except Perkasa but watcha gonna do, right?

Let us know what your thoughts are on this, either in the comments or on our handy-dandy poll below.