As you have probably noticed, Malaysia is under a movement control order (MCO) right now, which is basically an order for most people to stay at home and avoid unnecessary contact with other people.

The order came after a sudden rise in infections caused by the Covid-19 virus, with the aim to slow down the rate of new cases so that the total number of cases over time remain low enough for our healthcare system to handle. Like sucking in your belly so it doesn’t hang over your belt. Img from ECDC.

The MCO was originally announced to be for two weeks (18 to 31 March 2020). However, since the number of new positive Covid-19 cases kept increasing, the Prime Minister Muhyiddin Yassin announced that the order will be extended for another two weeks until 14 April.

“The current trend shows that new positive cases of Covid-19 are still increasing… This requires the government to continue the MCO for a longer period. And thus, the government has decided that the MCO period will be extended until April 14,” – Muhyiddin Yassin, as reported by MalaysiaKini.

With the extension being announced, some of you might wonder whether extending the MCO by another two weeks would be enough. Or maybe it’s more than enough? Since most of us probably haven’t lived through a plague, much less an MCO brought on by one, we dunno. But we can try looking at other countries, and see how long their versions of MCO are.

Of the ten countries with the most Covid-19 cases, three haven’t locked down yet

Before we even start, let’s just say that we will be using the term ‘lockdown‘ very liberally. It would seem that only France, Spain and Italy is really under lockdown, and for most other countries, the variations can be called many things: partial lockdown, social distancing, stay-at-home policy, movement control, etc. They’re all slightly different, but we’ll be using ‘lockdown’ because it’s convenient and you know what it means.

We won’t be covering all countries (cause there’s a lot), but we’ll look at the top ten countries with the most cases so far (in order: China, Italy, USA, Spain, Germany, Iran, France, Switzerland, UK, South Korea), plus several other countries picked at random. In this category, we’ve only found Germany and France (and initially, Malaysia). Starting on March 23, Germany‘s non-essential shops were shut and gatherings of more than two people were banned, and although the order is initially in place for two weeks, it is likely to be extended.

France, on the other hand, had a strict lockdown in place starting March 17, with fines for people violating the lockdown from the get-go. While initially it was expected to last only 15 days, with the end of the period coming soon there has been talks about extending it, possibly to six weeks as recommended by the country’s scientific council. According to their Health Minister Olivier Véran,

“As long as [the lockdown] will be necessary, it will last. We’ll only be able to stop confinement when the epidemic curve allows it.” – Olivier Véran, as quoted by Politico. Since India decided to impose a lockdown on March 25 on its 1.3 billion citizens, effectively one third of humanity is under some kind of lockdown right now. India’s lockdown will last for 21 days until around April 14.

With 709 cases and no deaths, South Africa just started its 21 day lockdown on Mar 26.

The UK, on the other hand, announced a stay-at-home order for three weeks starting March 24, with a review planned at the end of it to see if the order will be extended.

“No Prime Minister wants to enact measures like this. I know the damage that this disruption is doing and will do to people’s lives, to their businesses and to their jobs.”- Boris Johnson, UK Prime Minister, as reported by CNN.

While there are no official sources yet, some reports say that it is ‘highly likely’ to be extended until May or June, and some saying that the police are told to prepare for up to six months of this order.

The US launched a 15 day plan starting March 16 which essentially advised people to stay at home and practice social distancing, However, US President Donald Trump had said that their social distancing would not last longer than three weeks, saying that it’s too disruptive and that the coronavirus response had been blown out of proportion. He plans to have the country re-opened by April 12, which is on Easter. The second worst affected country in Europe, Spain‘s government used emergency powers to implement a lockdown with immediate effect starting March 14. Initially, the lockdown was set to last until March 29, but their parliament had recently decided to extend the state of alarm for another 15 days, with the new end date being April 11. This brings the total number of days to 28.

The worst affected country in Europe, Italy, had an initial lockdown that only involved a few states and municipalities, but their nationwide lockdown officially started on March 10. This made Italy the first country to implement a national quarantine due to Covid-19. The shutdown of most businesses and public gatherings are due to expire on March 25, and other measures like banning fan attendance to sporting events on April 3, bringing the total number of days to 25. However, there is a plan to extend these deadlines. So far, we can only find one case of a lockdown ending, and that’s at the Hubei province, of which Wuhan is the capital. Wuhan was put under lockdown starting January 23, and Hubei soon followed suit. However, following new cases dropping to zero for five consecutive days starting March 19 (down from thousands of new cases daily in February), it was recently announced that the lockdown on the region will be lifted.

NAH, BACA:
Here's how call spammers had to tukar tactics when the MCO happened

Hubei will allow healthy residents to leave the province starting March 25, officially bringing about two months of lockdown to a close. Wuhan, on the other hand, will have its lockdown lifted on April 8. This will bring the total number of days Wuhan is under quarantine to 77. Switzerland had not announced any lockdowns so far, but they had closed schools and leasure places and banned gatherings of more than five people, and will fine anyone standing within 2 meters of each other. These measures are in place starting March 20, and no end date has been announced. The Swiss government had been concerned that strict restrictions will push people to rebel and not comply, as seen in other countries. However, based on how things go, more extreme measures like a curfew may be implemented.

The Iran government is in the process of imposing a lockdown, while Jordan had perhaps imposed the shortest lockdown yet for three days starting 21 March.

South Korea seemed to take a different approach: instead of a lockdown, it tested citizens for the virus vigorously, resulting in a slowdown in the number of new cases starting March 13. By March 17, it was reported that South Korea had tested more than 270,000 people, which is the most tests done per million inhabitants by any country except for Bahrain. This organized testing system, coupled with extensive efforts to isolate positive cases and quarantine their contacts, had put a steady decline in their number of new cases from their peak in February.

As an aside, Malaysia right now seem to be doing a lockdown inside of a lockdown, with the introduction of an Enhanced Movement Control Order for two especially hard hit areas in Simpang Renggam from midnight of March 27 until April 9. In this enhanced MCO, all locals and visitors are subject to house curfew, with essential food items being distributed by the Social Welfare Department.

Right. Now that that’s over with, you might have noticed that it would probably need more than two or three weeks of lockdown to flatten the curve enough for their lockdown to end, so… how long will our MCO last? Well, as it stands right now…

The peak of the pandemic have yet to reach Malaysia

Earlier this week, research house JP Morgan had stated that it believes Malaysia’s increase of Covid-19 infections could peak by the middle of April, based on sample population, secondary infection rate and mortality assumption. This would mean that after mid April, the rate of infections would begin to slow down. We would like to check that, but none of us could integrate. Or do math. 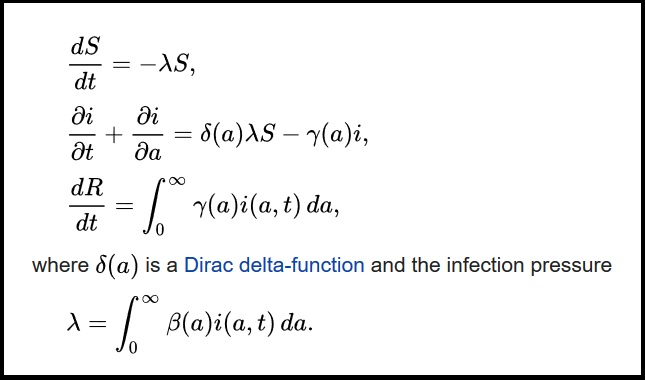 Or have the patience to learn. Kermac-McKendrick’s epidemic model, from Wikipedia.

Based on news reports, though, most of the countries we’ve looked at are either starting out on their lockdown journeys, or extending their lockdowns. Apparently two or three weeks aren’t enough to bring down the number of new cases or flatten the curve, although it might have something to do with non-compliance on the people’s part.

But how long is long enough? The only lockdown that ended that we’ve found to compare with is Wuhan, which took 77 days, or about two and a half months. However, Wuhan’s lockdown might have been a bit extreme. They were heavily criticised for their methods in the beginning, which many saw as ‘heavy-handed’ or even ‘draconian’. An anecdote even mentioned that their methods were so strict that a disabled boy died of starvation because his father and brother were quarantined, leaving him without proper care.

Okay, no. Gif from Giphy.

We probably can’t expect the same methods to be applied to Malaysia, but based on Wuhan’s experience and the JP Morgan report, we could be looking at anywhere between one to three months more of the MCO, provided that no one came up with a coronavirus challenge. It should be noted that some, like Universiti Sains Malaysia, are preparing for a longer MCO by estimating between four to six months for the Covid-19 pandemic to be overcome. Still, we should remember that…

Even the longest MCO will end eventually

Right now, the problem with the coronavirus is that we don’t know much about it, and it’s hard to fight something that we know nothing about. According to Pinar Keskinocak, who develops mathematical models for infectious diseases,

“It’s kind of … like trying to put out a fire without knowing where the fire is, or how fast it’s spreading, or how it’s spreading,” – Pinar Keskinocak, as quoted by Live Science.

But we’re starting to slowly know more about the virus than we did a month ago. We now know that it can be spread significantly by people who don’t show symptoms, and that it can spread from touching contaminated surfaces instead of just through contact with infected people. Just knowing these two things and avoiding it can make a lot of difference in slowing down the disease. You can even make your own hand washing song poster now. Img from WashYourLyrics.

The World Health Organization (WHO) have also recently launched a large global trial called SOLIDARITY to test the effectiveness of existing drugs used for other diseases on the Covid-19, which if successful, would greatly cut down the time needed to develop a cure for the virus. Even without that, at least 35 companies and academic institutions are racing to create a vaccine right now, with one about to enter human trials soon.

In Malaysia, we’re also ramping up coronavirus tests, aiming to double our daily testing capacity to 7,000 by the end of the week, and 16,500 a day by the first week of April. And based on Muhyiddin’s speech, public compliance to the MCO is already at 95% on the 8th day of the partial lockdown, and our hospitals still have quite some ways to go before reaching capacity, so maybe we can get through this without too many scratches if we keep at it.

The important thing to remember in these trying times is that even the darkest clouds will eventually disappear, and no matter what you choose to do while waiting for that… stay at home.