When it comes to bugs and insects, most Malaysians would want to be somewhere as far away from it as possible. Skittering bugs and flying cockroaches are probably the worse things that could come across your mind…or legs. But in Sabah, the State Agriculture Department is doing something that seems to defy bot logic and instinct…

Gif from The Mummy

Its director, Datuk Idrus Shafie told The Star that they are in the process of raising a bunch of weevils, and has plans to set them free in the Kinabatangan area by mid-2018.

“The breeding rate of these weevils are a bit slow but we hope that there will be enough to be released by then,” – Datuk Idrus Shafie told the Star

We admit that there are some cultural differences between East and West Malaysia, but what on earth could have made their state gomen release BUGS into their own waters?!

The Kinabatangan waters are threatened by an army… of FERNS

But not just any fern! Meet the Giant Salvinia, also known as Salvinia Molesta *primary school kid giggles*, and its causing Sabah a major headache. Much like Australia, U.S. and New Zealand, Sabah is now facing a potential crisis, as the State Agricultural Department said that the ferns have taken over a lot of the lakes and ponds in Kinabatangan area.

The giant Salvinia is a fern that floats on slow moving bodies of water, which sounds boring until you learn that it can double its numbers in as little as 2-10 days, covering entire bodies of water as a result. Just let the Giant Salvinia tell you itself:

But how much trouble can a bunch of floaty plants cause? Well, imagine what would happen if the skies over Malaysia went dark, FOREVER. We’re not talking about a prolonged monsoon, we’re talking about the disappearance of sunlight permanently. Just like when a water surface becomes completely covered by the ferns, the first casualty will be the plants living under water. Due to the lack of sunlight, and also oxygen (because oxygen normally goes into the water from the surface), those plants will eventually die. 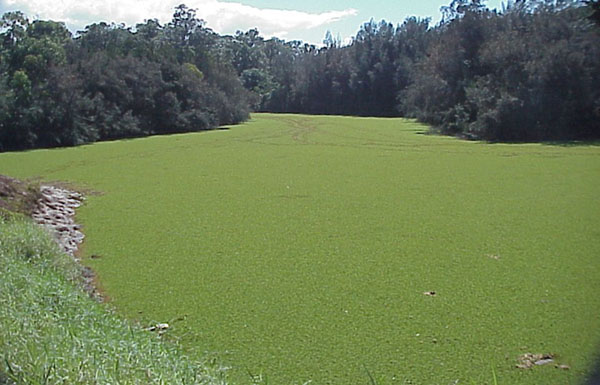 No, that “field of grass” is suppose to be a river. Image from wildlifemanagermentpro.com

Once the plants start to die off, it also reduces the available food and real estates of the animals that depend on them. That in turn decreases the available food for the animals that depend on those animals, and that is what Mufasa calls the Circle of Life. In the end, what was once a beautiful and balanced river or lake will be turned into a watery graveyard of death.

This is what a dying lake looks like. Image from w3.marietta.edu

Even if you’re not a fan of preserving the ecosystem (although it’s important), navigation, fishing, and recreational activities become difficult because there are ferns floating everywhere. Sometimes it can even affect hydroelectricity generation too. Worse than that perhaps, is that it also creates a breeding ground for parasites and mosquitoes that can be carriers for diseases like dengue fever and malaria.

Going back to the State Agricultural Department’s strange plan to release the bugs, the insect that they are release is the Cyrtobagous salvinae, also known as the Salvinia Weevil. 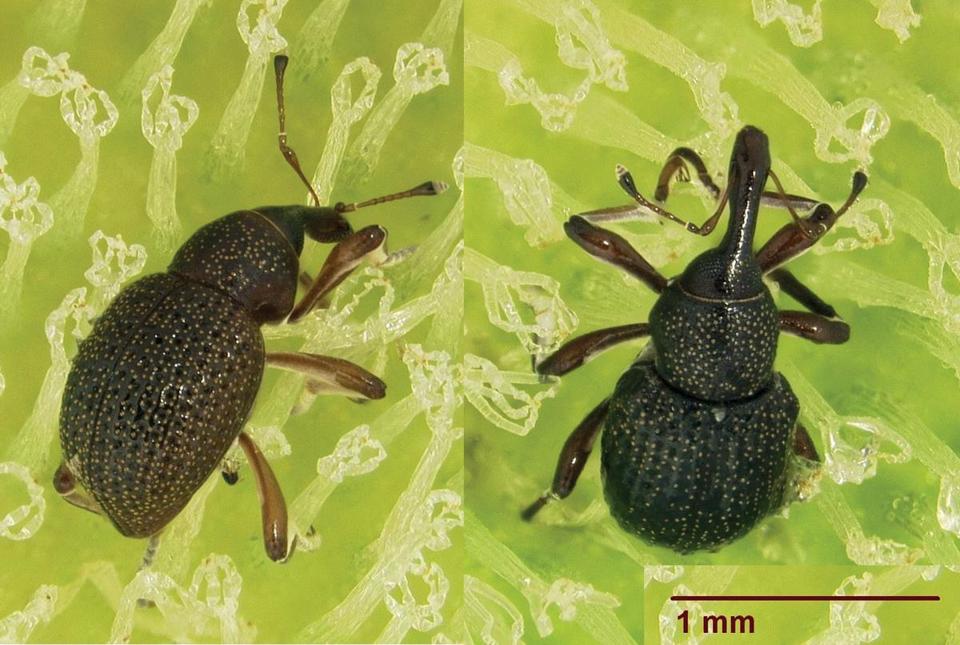 This 2 millimeter semi-aquatic beetle, is by far the most effective method to control the growth of the giant salvania, as it is a pain in the Giant Salvinia’s figurative butt from young to adulthood. The adult beetles loves to eat the young fresh parts of the fern, while the wormy babies tunnels into the fleshy parts of the plants for shelter. The eating and drilling degrades the plant’s ability to grow and reproduce, and so controlling its speedy spread. The best part is, there is no concern that the weevils will grow out of control. As Datuk Idrus said, they have a very picky diet, and only eats the Giant Salvinias. So no worries about weevils pouring out of the tap when you turn it on. But sometimes when you mess with mother nature, the outcome might not be what is expected.

Australia originally introduced cane toads and mongoose into sugar cane farms to get rid of crop eating pests. But it backfired as the toads and mongooses did extremely well and thrived, turning into pests themselves. In the case of the Yellowstone Park wolves, they brought balance to the entire food chain, even the plants too.

But we have to wonder… how did the plants get so out of control in the first place?

Tortoises and goldfish are cute, but they can also be baby eating monsters

The Giant Salvinia is actually a native plant of Brazil. Datuk Idrus said that fern was mostly likely brought into Sabah as ornamental plants for aquariums, garden ponds and such, as it is quite popular for that purpose. The problem arises when the plants are dumped into natural bodies of water, when owners no longer want them.

“Those bringing the plants should have known better as they are educated. But they are not agriculturists. They hid the plants in their luggage and tried to bring them in,” – Sabah Agriculture Department director Datuk Idrus Shafie, quoted from The Star

Generally, it’s just not a good idea to be exposing foreign plants and animals into the local ecosystem. In certain countries like Australia, and certain states in the U.S., they take the fern infestation very, very seriously. Its illegal to import the fern into Australia, and even transporting the fern in your boat is an offense that can get you fined in some U.S. states. In Singapore, it is generally illegal to release animals into public parks, reservoirs, nature reserves and many other places.

Remember that pet tortoise with the red lines on its cheek some of us used to have? Unless it mysteriously disappeared, most of us would’ve probably released them into a pond somewhere when it grew too big to keep. The red-earred terrapin (its actual name) turns out to be a very popular pet around the world (fueled by the Teenage Mutant Ninja Turtle craze), but it’s wrecking havoc for other native aquatic animals after people keep releasing them into ponds and lakes. Because of its relatively aggressive behaviour, it is outperforming other tortoises and growing out of control. While spreading disease to humans and tortoises alike, their presence affects some of the other animals as well as it will eat their babies and eggs if it has the chance.

Another common pet that’s also terrorising local wildlife after being abandoned is surprisingly, the common goldfish. Growing as big as their environment allows, the goldfish is actually carnivorous, and they scavenge the floors for sediments and food bits. 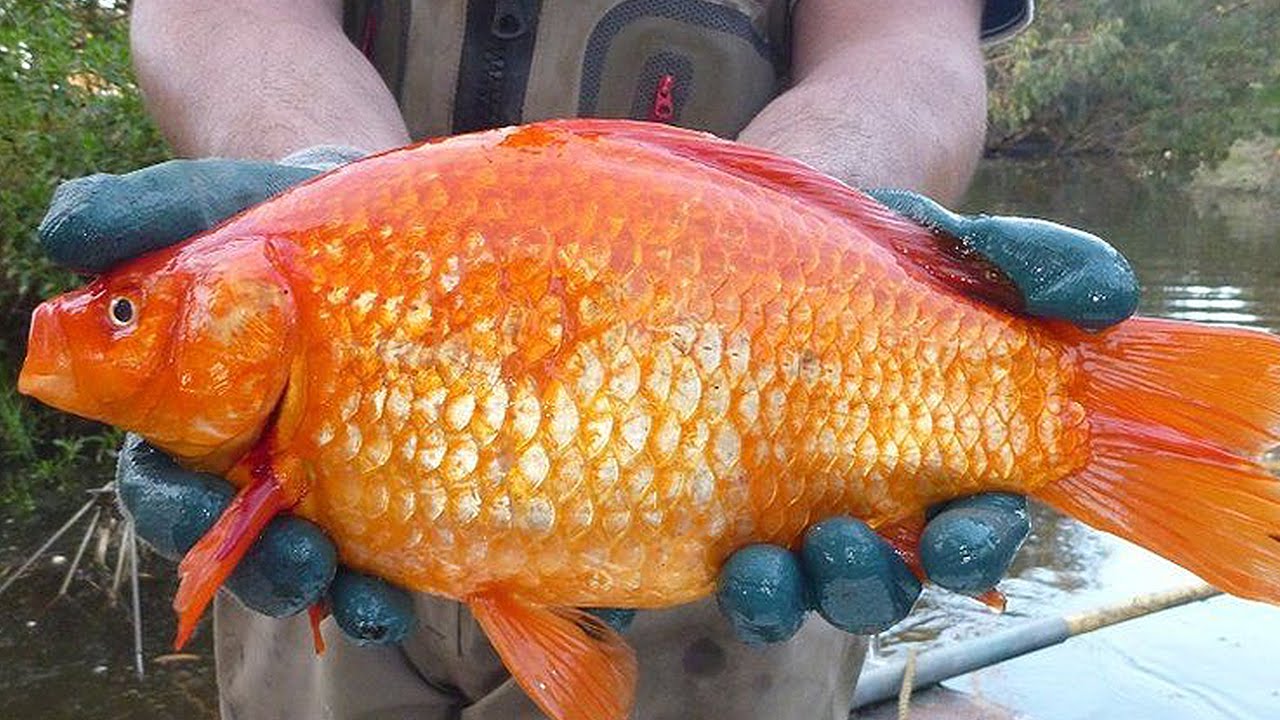 ITS A TON OF GOLD… Fish. Image from abc.net.au

Unfortunately, this means they will gobble up the eggs of other fishes that live there too. As far as we searched, both the abandoned terrapins and goldfish doesn’t seem to be causing Malaysia as much trouble as they do in other countries, although the terrapin has become very common in Malaysian waters.

Many of us might not have known that the simple practice of throwing away aquarium plant can lead to a large scale environmental problem. Everyday practices and habits can be contributing to a larger and more serious problem, like how rubbish that are tossed on roads can end up in drains and lead to flash floods, or how the garbage we produce is causing deforestation due to the demand of more landfills.

At the same time this fern infestation issue also brings up the topic of animal/plant abandonment. We’ve already shown how randomly dumping and releasing pets into the wild can damage and bring unbalance to nature’s ecosystems. The Sarawak Society for the Prevention of Cruelty to Animals (SSPCA), who has been struggling with accommodating the large number of animal children, had this to say:

“If you do not intend to keep any puppies or kittens, get your pet spayed or neutered. SSPCA reserves the right to refuse to accept animals from irresponsible pet owners,” – SSPCA, quoted from The Star

What they meant to say was: Owning a pet is a responsibility. If you’re not ready for the responsibility that comes with having one, then perhaps you should consider not having one at all.

STUPID PLANT, I SHOULD HAVE BURNED YOU. Image from The Crawlers

In regard to plants, there are no plant adoption shelters that you could give it away to, so here are some ways you can use to get rid of them, if you’re worried that they be crazy invasive species. Just pay a bit more attention to the composting bit, because some plants can share quite a few features with zombies i.e. return from the dead.