Hey people! Bersih 5 has just been confirmed to be happening. Just wanted to ask how do you think Bersih 5 can improve on Bersih 4? 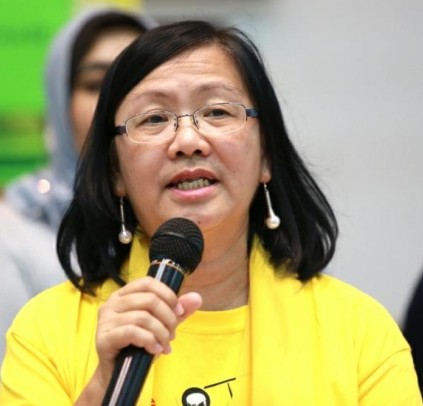 So you may have heard that the latest installation in the Bersih series, Bersih 5 was announced not too long ago by their chairperson, Maria Chin Abdullah.

“The date and details of the Bersih 5 rally will be announced in due course as we are still in the midst of discussions.” – Maria Chin Abdullah, as quoted by NST

But while it may be necessary, it does seem like the last Bersih rally was hardly a few weeks ago. Not long after the announcement of Bersih 5, some were already questioning whether we should actually go through with it.

And just like the last Transformers movie, it seems as if Bersih is a series that has gone on for just a tad too long (heck they’re even making a 5th Transformers movie), or at least in need of some reinvigorating.

So what we’ve done is try to see what the fans are saying. What do people want out of Bersih 5? We asked around, got some answers, and after that asked Bersih chairperson, Maria Chin Abdullah herself, if these were things Bersih was already taking into consideration and working on. And if their answers weren’t enough, we also included suggestions for Bersih!

If you went for Bersih 4, you may have realised that there was this continuous buzzing sound in the air. Those sounds were made by a traditional African instrument called a vuvuzela. And yes, a lot of people were actually mad at it.

WHAT BERSIH CAN DO ABOUT IT:

To be fair, Bersih did ask people to not use the vuvuzela during Bersih 4.

“We ask your kind consideration to lower the noise levels in Kuala Lumpur.

We would appreciate stopping the use of vuvuzuelas.” – Bersih in a Facebook post, as quoted by The Star

Just don’t use vuvuzelas, and discourage your friends and family from using lorh. 2. Chillax with the Chinese music a bit can?

For those of you who followed what happened with Bersih 4, one of the main criticisms was that most of the people that went were Chinese, in fact, one song seemed to played more than any other song during those few days.

And that made very good ammunition for certain people to tembak at Bersih. Why weren’t the Malays at Bersih 4? Well, we explore some possible reasons in another story here.

“Mingguan Malaysia, the Sunday edition of Umno’s Utusan Malaysia newspaper, wasted no time in painting the rally as a success for the opposition Chinese-dominated Democratic Action Party (DAP), accusing it of exploiting the split in the Malay electorate.” – As mentioned on Straits Times

So of course it’s not surprising that people have voiced their concerns about this.

To be honest, when we called Maria, on of the first things she asked was whether we were gonna ask about race, so it’s safe to say they are well aware of what happened last Bersih, and they know that has to change this round.

“The focus must be on representation at Bersih 5. Not just in terms of race, but geographic and social representation as well. We are working hard to get Malaysian support. I will phrase it that way instead.” – Maria Chin Abdullah

But what are they actually doing to ensure there is more representation, well she says they have a strategy, but can’t tell us what it is just yet. Maybe after Bersih 5 then can. But beyond (lol) just that, she asks that people take the initiative to invite people from different races and backgrounds themselves. As far as music goes, Maria says that they cannot stop people from doing so.

“The organisers’ main language is Bahasa (Malaysia), but we shouldn’t be censoring other people.” – Maria Chin Abdullah

Whether or not Bersih actually played Chinese songs during Bersih 4 (because to be honest, many of us heard it la), but we should consider that not everyone understands Chinese.

In fact, in our previous article about trying to figure out why there weren’t many Malays at Bersih, we even put out this suggestion:

3. Bersih is like fun fair now! We need to be more serious!

The first few Bersih rallies were well known to involve stuff like tear gas and water cannons. During Bersih 4 however, things were a lot more….festive. And it’s hard to say it wasn’t when it was even reported to be festival. Look a lot like concert la. Image from aliran.com

While that’s hardly a bad thing, some people have pointed out that it made Bersih look like a fun thing, rather than a rally that was asking for change. Despite that, people are divided on whether or not they like this new Bersih or not.

Some actually said that we needed more than just fun:

While others were (somewhat) a bit more accepting of a new kind of Bersih:

Actually Maria said that she has no problem with Bersih being a carnival AS LONG AS they are able to put their demands forward. But she also understands why people think that Bersih has become less serious.

“Our demands are explained at certain designated points, but because there are so many people going in and out, the message may not have gotten through.” – Maria Chin Abdullah

But she goes on to add that even if people don’t fully understand everything about Bersih, it means a lot to her to see so many Malaysians come out regardless. She tells us how back in the 1980’s, rallies with a 1000 people would have been considered a success, and to see Bersih being supported by tens of thousands of people is something she’s never even dreamed of.

“You can see over the course of Bersih 1,2,3, and 4 that the numbers have been increasing. People have gotten over that fear. And that is change.” – Maria Chin Abdullah

Regardless of the crowd, it does seem that communication is a problem because of comments like these.

NAH, BACA:
4 reasons why taking in the Rohingya refugees is good for M'sia

And so Bersih should consider making full use of the presence of people during Bersih to send across better messages. One commentor even had a suggestion.

4. Can Bersih be more neutral pls?

“Bersih was first launched in November 2006 as a political party-driven movement with members consisting of opposition political leaders and representatives from the civil society.

In April 2010, the movement was re-named Bersih 2.0 as a fully non-partisan movement free from political influences.” – Straits Times

So the Bersih organisation that we refer to today is actually Bersih 2.0. The problem is, some people have commented on how they’ve not been living up to that politically neutral claim.

And it’s not like these are only being said now. This article on Loyar Burok was written by someone who chose not to attend Bersih 4 because of how they seemed to be silent on matters which involved the opposition. An example given was when PKR controversially removed Tan Sri Khalid Ibrahim as Menteri Besar of Selangor. First off, Maria clarifies that they have been speaking up against the opposition when the need arose. After checking a little bit, we found that while they weren’t exactly on Tan Sri Khalid Ibrahim’s side, they also weren’t happy with what PKR did in Kajang soon after (an MP stepping down to allow another MP to take their place) too, and aside from that, she adds that they’ve also been vocal about how divided the opposition is.

But she also asks people to consider this.

“Political parties also consist of individuals, who belong on the street (during Bersih) as much as the rest of us.” – Maria Chin Abdullah

She also says that political parties are more organised, and thus able to come to the rallies with bigger numbers. But she also says that Bersih has always extended the invitation to their rallies to both the government and the opposition. And she says that only people who have agreed to Bersih’s demands would be allowed to speak at their stage.

“We didn’t allow Mahathir to speak (when he came for Bersih 4) because he didn’t agree with Bersih’s demands.” – Maria Chin Abdullah

In our previous article, one of suggestions about how Bersih could be more appealing to Malays also included a sorta political answer which was to make Bersih a safe place regardless of which political party you support.

It’s now been almost a decade since, and it seems that some people have started to grow a little tired from doing the same thing over and over again.

Before Bersih 4, we even wrote an article on what Bersih 4 would achieve. and back then there were already people who were already tired of the whole Bersih thing.

In fact, some people actually gave us suggestions on some things that Bersih can consider doing for it’s next rally.

To be fair, Bersih is already trying it’s best to do more than just organise yearly rallies. They actually have a lot of other initiatives that go on the rest of the year. Some of Bersih’s other campaigns. Click for more info. Screencap from bersih.org.

Maria however, does admit that there is a lot of expectation on Bersih to continue organising things, and she knows they are going to fall short of some of these expectations.

Actually, this point leads right to our conclusion so……..

If we want results, why stop at rallies?

“If we don’t move, you move. Rather than wait for leadership, people should lead in their own constituency.” – Maria Chin Abdullah

She tells us that Bersih does hope to see individual and independent movements among the people. Because honestly, the normal outcome for any rally or protest is that nothing happens, and we’ve mentioned it before. And Bersih knows this.

“I’m not saying we’re perfect, we can improve, but we also want initiative and leadership.” – Maria Chin Abdullah

Of course to start something is not easy la. But not to worry, Maria tells us that if you don’t know where to start, you can go ahead and check out some of Bersih’s other initiatives. She recommends something called the Bersih Boot Camp where people aged 18-35 can go for a 3-day, 2-night training on democracy, elections, and all that Bersih stuff. Their last one just finished in Ipoh, but more to come!

So while it’s clear that BERSIH isn’t a perfect rally, it’s not from lack of trying. Could it be that our expectations might be too high for a team that’s only 5 full time staff (yes, we checked) trying to do what they think is best for our country? Perhaps we might be more forgiving if people stopped viewing BERSIH rallies as an disappointing end-goal, and instead, as a good start.