The Malaysian Communications and Multimedia Commission (MCMC) has released an advisory for WhatsApp group admins here – Dos and Don’ts.

Couple of days ago, the Communications and Multimedia Ministry announced that WhatsApp group administrators could be prosecuted if their chat group members spread fake news!! 🙁

“It doesn’t matter whether it’s fake news, incorrect information or slanderous statements – the admin is responsible for the members.” – Datuk Jailani Johari, Deputy Communications and Multimedia Minister, The Star

This pretty much affects, ohhh gee, only about 99.9999% of Malaysians, since we all have one or a dozen groups on WhatsApp, don’t we? Family, friends, hobbies, fan clubs, stuff like that.

But fake news has caused the Government one too many headaches… Last year there were two sets of fake WhatsApp messages about IGP Khalid supposedly slamming the Malaysian Anti-Corruption Commission (MACC). Two months after, more than 3,000 people swarmed the National Registration Department (NRD) because a WhatsApp fake message claimed it was offering those with PR status immediate citizenship! How generous -_- Is it any wonder the Government launched a website (sebenarnya.my) to help the rakyat verify ‘questionable’ news? Not really.

We understand the Government’s frustration, but this WhatsApp prosecution thing raises many questions (and probably many eyebrows). Here are 6…

1. How will the cops know what I send on WhatsApp?! Hope it doesn’t come to this :p Image from Malay Mail

Ok so we’ve got the rule to punish WhatsApp admins if they have fake news in their group, but first, how to catch them? Unless fake news reaches the enforcers’ (or Kipidap’s) own phones, who is going to report them? Well, the Malaysian Communications and Multimedia Commission (MCMC) clarified that they can only do that IF they receive complaints from the public. So if no one reports you or your group then safe lor.

Facebook on the other hand, is a lot easier to police thanks to the Government’s army of cybertroopers. There have been a few examples of people being reported to the police for certain comments on Facebook. Plus, Facebook is public, where everyone can see what you post (unless you change the privacy settings), whereas WhatsApp is private – although there are arguments that WhatsApp messages can kena hack.

Of course, we ain’t saying that the Government is hacking into your phone because that would be *drum roll* FAKE NEWSSS! 😆 However if you want to protect your phone, just because, then you only need to delete and reinstall WhatsApp, then this time turn off message backup, when asked during the installation setup.

2. But if people want to share, how to stop them? By now, thousands of WhatsApp admins would have messaged their group about this rule and request that their members do not share fake news. But a request is only a request. What’s to stop some members from sharing fake news on the group anyway, because hey, it’s a free world (*cough* not really, but yeah). Maybe some people aren’t worried about getting caught.

OR WORSE, what if they memang want to get the admin or group into trouble?! An evil ex maybe, or a fired employee? They could send a fake message and see that the cops somehow get wind of it. Then bammm, police sirens, lokap, kantoi!

We should stop watching too much TV, but look, all we’re saying is that if a group member wants to send a message, they’re going to send it. Unless admins threaten or delete errant members, which sounds very drastic, their hands are tied. So perhaps the question we should be asking is, is it the admin or other group members’ fault if one person posts fake stuff?

3. But my mom thought it was real and she sent it to me because she’s really concerned 🙁 Many of us have anxious parents, aunties, uncles and friends who get really freaked out over things sent on WhatsApp, and then buying that news, they share it to their groups. Oh no, ‘UFO Rice Causes Radioactive Tumours’, SENNDDD! ‘Robbers Use Genetically Modified Bats To Target Victims’, SENNDDDDD! But often they really don’t know better and they share stuff out of concern.

NAH, BACA:
Workers in today's Malaysia have less power than we did back then. Here's how it happened.

The only way to avoid this situation is… But seriously though. Verify your news before sending it to other people because it can cause unnecessary widespread panic for no reason. Worse still, it could cause people to do very craaazy things, like this guy in the US who fired a gun in a pizzeria because he read FAKE news that Hillary Clinton ran a child-trafficking ring in that location. Just do a quick search on Google if you’re not sure, or better yet, don’t send it on WhatsApp, just tell your friends when you meet them face to face. No written evidence 😛 Actually once a message has been sent to a group on WhatsApp, the sender cannot delete it, unlike Telegram or Facebook. The only way to get rid of the evidence is if someone instructs everyone to delete it on their phones. But what if there is this one forgetful fler who totally forgets to remove it, and he gets caught? Then the whole group, especially admin, KO la because of that.

5. What about a private messages? What if it’s on WeChat, or SMS, or email? The Communications and Multimedia Ministry not only mentions WhatsApp, but other private messaging platforms as well, such as WeChat, Viber and Telegram. But again, what are the odds of catching people who spread fake news unless someone decides to report you, because they can only act on a complaint basis? We can only guess that the numbers of cases would be very low la.

6. If my admin ciao and I automatically become admin without knowing how? If the admin leaves the group, someone else is selected at random to become the new group admin

According to WhatsApp’s FAQ, if a group admin leaves, the app randomly selects another member as the group admin. So if a fake message was sent during the previous admin’s, uhh, tenure, but then that admin cabut, then the new person to become admin tak tau, then unfair also la like that. 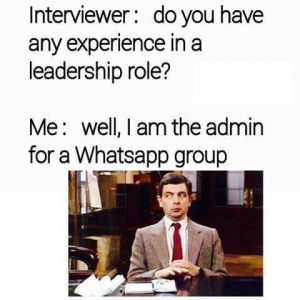 Think about it though, how to enforce a rule like that? WhatsApp admins have voiced their worries about this new rule… Joe, 25, said that he would think twice before becoming an admin of any more group chats, while Saleha, 33, has a group that likes to share fake news, but they are the older generation la, and they don’t mean any harm by it, they are just looking out for the safety of others. “Of course, I would not kick anyone out of the group, because they are family members and might feel offended,” she said.

Luckily for WhatsApp users in India, the Courts have ruled that admins cannot be held liable for what somebody else on the group sends. Frankly it is like if a 16-year-old steals Twisties from 7-Eleven, but they put the PARENTS in jail. Mana boleh like that?

Since the announcement by the Ministry, this disclaimer notice has been circulating on several group chats:

Hopefully it doesn’t leave a trail of scapegoats in its wake.