But what do Malaysians themselves think of all this?

For those of you who haven’t heard, Yoodo is Malaysia’s first customizable phone service that lets you choose exactly how much data, messages, and calls you want in a mobile plan tailored just for you. If you’re the kind that doesn’t use SMS – now you won’t have to pay for it anymore! Of course, with that kinda choice, it was the perfect opportunity to find out more about what Malaysians want from their mobile phones, which is why they partnered with CILISOS for the second-ever AkanData Survey!

We had 5,665 PEOPLE taking our survey, which was A LOT more than the 724 people who took part the last time. But before we share what we discovered…

Who got so much free time to take our survey wan?

The breakdown of the respondents on our survey were as such:

And so with all these people answering the questions we had about their phones, here’s what we found:

1. Uncles and aunties are the biggest phone addicts of all! Eh, can someone put their lure module on this Pokestop pls? Image from iMoney.

Considering how many times we’ve heard the claim about millennials being phone addicts, we were surprised to find that actually… older people were the ones who cannot tahan being away from their phones the most!

Asking how long our respondents can last leaving their phones at home, only 19% of those aged 20 and under said they couldn’t be away from their phones at all. In contrast, 32% of those in their 50s said they couldn’t stand being away from their phones! Additionally, when we asked them what their biggest complaints were with their mobile phone operators, more than HALF complained that their speed wasn’t fast enough, compared to only a third of under-20s who thought so.

Ok la to be fair, there were over a thousand respondents in our sample size of under-20s while we only had 31 people in their 50s taking the survey. BUT another pattern we found among a larger sample of our respondents was…

Dramatic reenactment of what happens when you run out of data. GIF from Soscili.

On top of that, Johoreans were also among the most likely to run out of data every month, with Sabah coming first and Johor second. Maybe they should really start considering connecting their phones to their WiFi instead. 3. BM speakers are the LEAST likely to use their phones on the toilet ? 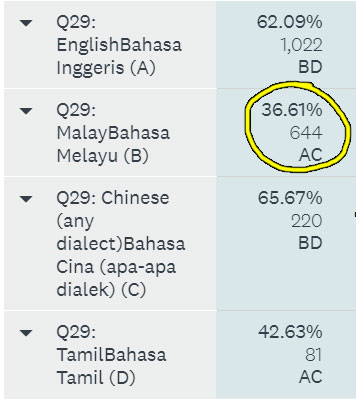 When we asked our respondents in which situation have they used their phone in the past week, almost TWO-THIRDS of English and Chinese speakers say they use their phones on the toilet bowl, which was TWICE the rate of Malay speakers who said they do! But maybe it’s because they just want to keep their phones poop free?

In a study that was done by London scientists in 2011, it was found that 1 in 6 phones are likely to have poop particles on them. Basically when you flush, tiny poop-filled drops of water spray everywhere kena-ing items like your phone and toothbrush, among other things. Imagine getting poop particles on your work clothes if you go at work. Image from our article on Malaysian TV habits.

4. Speaking of which… BM speakers use TWICE the amount of data Chinese speakers do! TFW everyone else in the office can connect to WiFi but you.

NAH, BACA:
Makan time! Tell us your best buffet strategies (and win a free makan at a 5-star hotel)

In fact, this pattern was consistent across the board. When we asked users how often they ran out of data, 30% of BM speakers said they run out of data EVERY MONTH while only 13% of Chinese speakers face the same problem! Trying to understand why, we found out that a majority of Chinese speakers rely on their WiFi most of the time, while a majority of BM speakers use their data EXCLUSIVELY.

5. If you think girls talk more on the phone than guys… think again

According to the Daily Mail, an Oxford study was conducted confirming the stereotype that women speak longer on the phone than men. And looking at the responses we got, women actually almost DOUBLED the proportion of men who said they spend more than an hour a day on the phone. “You can’t hear me smile over the phone, but I’m doing it for this stock photo anyway”. Image from Malaysian Women’s Weekly.

BUT that wasn’t the full story. When we looked at the other end of our question, we found that 45% of guys said they spend less than 5 minutes talking on the phone, while another 19% told us they spend between 5-10 minutes every day.

This behavior was actually closely matched by women, 45% of whom said they spend less than 5 minutes talking on the phone, and another 17% spending between 5-10 minutes a day. So actually ah… the Oxford study also kinda doesn’t hold up because we found almost no difference. ¯\_(ツ)_/¯

6. Rich people really like to use their phones while driving ? Your RM300 fine for texting while driving could instead get 100GB of data for two people.

7. U Mobile users are less picky while Maxis users are more atas

There was a pattern we caught among the users of each telco in Malaysia. More generally, Maxis customers were more willing to fork out more money for higher expectations of service, while U Mobile users were happier to pay less and get less. For example when asked about their phone bills, 39% of Maxis users said they pay more than RM100 a month compared to only 10% of U Mobile customers. Then, when given the choice between buying a brand new atas but expensive phone or a cheaper phone with mediocre performance, 36% of Maxis users chose buying more expensive phones versus 22% who chose the cheaper option, while 42% of U Mobile users preferred cheaper phones against 17% who would choose buying more expensive ones.

Additionally, when comparing other telcos, DiGi users were twice as likely to have seen their phone bill increase in the past year compared to U Mobile users. Overall though, most Malaysians (78% to be exact) have seen their phone bill either increase or stay the same, so it really seems like U Mobile customers are the most jaga cost of the bunch. Would explain why this guy was hanging outside our office. Image from TahanUni.

But while we’re on the topic of telcos in Malaysia…

8. The thing that makes Malaysians the MOST GERAM about telcos is…

So, the BIGGEST complaint we got was from respondents who said their telcos speed and coverage isn’t as good as they say. And it’s not our imagination either – a UK-based company actually ranked Malaysia’s 4G among the slowest in the world, although they acknowledged its availability in most of the country. Yay at least we beat half of our neighbors…! Image from Malay Mail Online.

But on top of that, the second biggest annoyance we got from our respondents was that telcos come up with plans which have all sorts of things they don’t need. This is not surprising, considering most postpaid plans require users to sign a contract which charges a fixed amount monthly even if the user doesn’t use up all of the calls/messages/data given.

Oh, and with 63% of our respondents on the survey using a postpaid plan for their mobile line compared to 37% who use prepaid, we can kinda assume that there are plenty other Malaysians out there who feel this way too.

Wow. So Malaysians aren’t really satisfied, but they all want different things. So how!?

While there were a few points which showed how Malaysians generally share the same habits when it comes to our phones, we still found quite a bit of diversity in the answers we received. For example, what kind of videos we prefer to watch to the kinds of phones we prefer to buy. But if you think about it, the fact that mobile phone users can’t tailor plans to fit them according to their needs should seem a lil bit weird.

That is of course, until now.

So all you need to do is create your plan on their website, choose a new number or keep your old one, sign up to either collect your SIM card or have it delivered, and once it arrives, activate it to start using.

Who knows? Maybe by switching, the 78% of you who’ve seen your phone bills go up or stay the same for the past two years can finally see it go down again. ?