Every year, exceptional women around the world are chosen to receive the US Secretary of State’s International Women of Courage Award… and this year a Malaysian WON! Das right, Nisha Ayub, a transgender rights advocate was awarded among 14 women. Before we go on…

[UPDATE 6/4/2016] We’ve made some changes to this definition based on conversations we’ve had with people within the community.

The transgender community consider that physicality has little to do with what they actually are. A transwoman is basically someone identified as male by doctors or society, but knows she’s a woman, while a transman is someone similarly identified as female, but knows he’s a man. LOL look at this cute bear Nisha’s NGO came up with. Image from Justice for Sisters

PS: We’ve received a few comments that “Girl” is the wrong term to use for a transwoman. We’d like to apologise for this oversight, but want to mention that we used the term GIRL because…

A. Facebook has a 65-char limit for posts and

B. We wanted the post to appeal not just to transgender supporters, but also the general populace.

Nisha’s actually the second Malaysian to win it, while the first is Datuk Ambiga Sreenevasan in 2009. Ambiga was honoured for advocating human rights, status of women and religious tolerance, in the face of death threats and unsightly moons bobbing in front of her house (eww).

On her part, Nisha co-founded two NGOs that protect transgender people in Malaysia: Usually when someone wins an award you say congratulations, unless you are Kanye West, but in Nisha’s case well…

Why are people bothered that a trans woman won the award?

Screenshot of hate comments on US Embassy’s FB post

We’ll let the comments speak for themselves. BUTTT hey, she did get praises too:

Screenshot of love comments on US Embassy’s FB post

Waiiiit… notice a pattern here? Positive comments were congratulating her for her WORK, while negative comments were more like PERSONAL attacks. From what we gather, it seems people are bothered that they gave an award for women to someone who was not originally born a woman. Scroll the thread here.

Eh, got rules saying a trans woman cannot be selected meh? According to the description on the Secretary of State’s page, the award:

“recognizes women around the globe who have demonstrated exceptional courage and leadership in advocating for peace, justice, human rights, gender equality and women’s empowerment, often at great personal risk.”

Maybe if the award was for everyone, not just women – if it was called International People of Courage Award – would people have reacted the same way? That would be an interesting thought.

However, we found a comment on JFS’s About page by a person who went by the name ‘Abdul Razak’ which kinda shed new light on the issue… people still might be able to accept the trans community, but what they can’t accept is prostitution which has come to be associated with trans people. Screenshot of Channel 4 News documentary which followed religious police on their rounds. Click to watch video

Ok, so besides founding two NGOs, what did Nisha do to deserve the award?

NAH, BACA:
Makan after midnight may be a bit harder next year, thanks to a new Health Ministry policy. Screenshot from The Guardian article

In 2014, three Malaysian Muslim transgender people were charged under Section 66 of the Syariah Criminal (Negeri Sembilan) Enactment 1992 in the Seremban High Court:

A male person is not allowed to wear women’s clothes or pose as a woman. The punishment is a fine of not more than RM1,000, or jail for not more than six months, or both.

The law does not consider people with a medical condition called ‘Gender Identity Disorder’ (GID) – which led to their expressing themselves as women – but each of the three respondents had the confirmed medical condition. So all the while they have been repeatedly detained, arrested and prosecuted for how they dress by Negeri Sembilan religious authorities.

So applied to the Seremban High Court for a judicial review to say that Section 66 went against these articles of the Constitution:

At first the case almost passed, but it was dismissed another judge. So the respondents took the case to the Court of Appeal and finally it was ruled that Sect 66 went against those articles, therefore it was void.

However in Jan 2015, the Federal Court allowed Negeri Sembilan to appeal the Court of Appeal’s decision. The whole case can be read here on Loyar Burok. So for the transgender community, the battle continues. 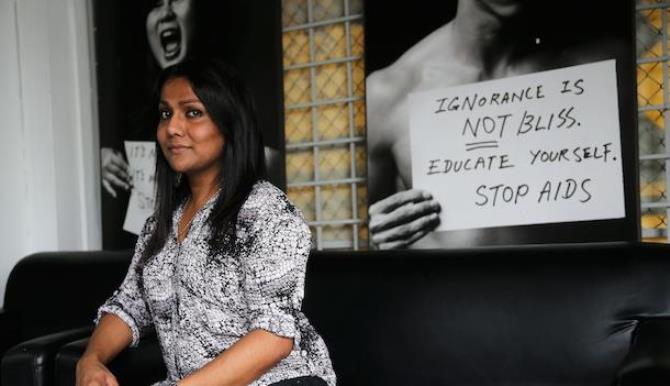 And heyyy, what do you know, HIV/AIDS is EXACTLY what Nisha’s NGO is trying to curb! Go check out their sessions here. So mission-wise they could work hand-in-hand towards that goal.

“This is just the tip of the iceberg. Yes, the ruling is a victory for us but we have to do much more to move forward. We are not asking for special treatment, all we ask for is to be treated as equal citizens.” – Nisha on Astro Awani

The bigger picture is, trans people have ‘no place’ in Malaysia

Nisha talked about how the transgender community are always afraid of going out, bumping into cops or religious police. Some people have even been caught while in their cars! In fact, Nisha’s no stranger to the persecution. At 21 years old, she was arrested and jailed three months in a men’s prison – not for a crime but for cross-dressing. As if that’s not bad enuf, she was sexually assaulted in jail!  😯 And just a week after her super prestigious recognition, the transgender community was targeted again when Jawi officials raided a dinner function they were holding at an upscale hotel on 3rd April. It was a private fundraising event where they hosted a beauty contest for entertainment. Latest news is that Jawi plans to charge Ira Sophia, the person who allegedly organised the event, under Section 9 and Section 35 of the Syariah Criminal Offences (Federal Territories) Act 1997.

In fact, Human Rights Watch’s report named Malaysia as one of the worst countries in the world for transgender people. Some have been fired from jobs, denied access to healthcare, kicked out of their homes and so on. Even more horrifying is how they face rape and humiliation from prison wardens and other inmates in men’s prisons where they are jailed! WTH?!

Can you imagine after all that, Nisha went back to court TWICE (2010 & 2014) to fight for fellow transgender people? She practically had to relive the horror. Despite such harsh experiences, she fought to make sure others don’t go through what she went through. That’s an award-worthy attitude wouldn’t you say? So, as far as the Secretary of State is concerned, they see someone who rose above her own ordeal to defend others.

[Note from Writer]: I’m sorry that the footnote caused hurt. I really didn’t intend for it to hurt anyone at all. And I truly apologise that it steered the conversation away from celebrating Nisha’s achievements and contribution to the community. Despite my difference in beliefs, I truly acknowledge that she did a lot of great work and helped many people in their time of need.