[UPDATE 5/9/2019]: So we originally wrote this back in Sept 2016, but recently PAS MP Siti Zailah Mohd Yusoff has backed a call for a ban on the jawi script for products made by non-Muslims. Her reason was that this could deceive customers. As part of her call to remove jawi from products by non-Muslims, she also called for the halal logo for non-Muslim businesses to be changed so that it no longer has the jawi script on it.

Read on to find out how the current process for halal certification works!

To most Malaysians, the sight of the Halal logo is a familiar one you’d expect to find on any junk food packet, mamak, or fast-food restaurant. But beyond that, this little black and white circle has become not just a symbol of guarantee for Muslims that what they’re buying is allowed by their religion, but also for businesses looking to expand their reach in Malaysia and beyond.

Right now, a halal certificate can only come from three sources – The Department of Islamic Development (Jakim), state religious departments (JAIN), and state Islamic councils (MAIN) – but the Jakim certification is still considered the best and most commonly applied for of the three… until now, because *inserts coin* HERE COMES A NEW CHALLENGER! Yep, the Malaysia Institute of International Islamic Cooperation (Ikiam) has partnered with the Rubber Industry Smallholders Development Authority (RISDA) to introduce a new Halal logo – but only for products produced by Muslims.

“The need for another halal logo is to distinguish products that were produced by Muslims against that of non-Muslims…” – Zahidi Zainul Abidin, Chairman of RISDA and Ikiam, as quoted by Malaysiakini.

Just to clarify, their halal logo is meant to be placed alongside Jakim’s and not to replace it. According to the chairman of Ikiam and RISDA (same guy), their logo would boost consumer confidence because some companies have been playing the hanky-panky after getting certified by Jakim. Not just that, it would help actual Muslims  because 72% of halal certification actually belong to non-Muslim businesses.

As you might expect, this is already generating some pretty heavy criticism (as well as support) on the social medias, but the best one we’ve read was this:

However, the biggest snub came from Jakim itself, who said “Bro, you’re breaking the law, bro.” and asked Ikiam-RISDA to actually check with them first before announcing any new logos willy-nilly. We tried calling Jakim with some questions as well, but we gave up after playing the passing game with their various departments. Luckily, most of the their resources are available online  😉

Like how to properly make a Halal logo. Image from Jakim.

But before we talk about the issues of a second logo or why non-Muslims are in the halal business, let’s get into the fundamentals first, like what “Halal” actually means… In the context of food, we’re all familiar with Halal and it’s evil forbidden cousin Haram, which leads to the assumption that it’s a black-and-white scenario – you can either nomnom or you cannot. But that’s not actually the case because there are other “in-between” categories as well, like:

Another thing to note is that the rules of halal are actually spread throughout the Quran and Hadith, so different countries (or schools of thought) would have slightly different interpretations of what’s halal and what’s not, especially when it’s not explicitly stated in the Quran. An example of this is “Halal” beer, some of which were found to contain very small traces of alcohol despite being marketed as non-alcoholic. Some Muslims see this as Haram because drinking a lot would lead to intoxication or temptation to try the real stuff, but others see it as Masbooh because you’d have to drink an inhuman amount of it to actually get drunk. Click to read our article on things you didn’t know were Halal!

For the purposes of this article though, we’ll be following Jakim’s interpretation which is called Hukum Syarak – Islamic law determined by the schools of thought (mostly Syafie and Hanafi) officially adopted by Malaysian Muslims. And no, they don’t consider non-alcoholic beer as Halal.

Jakim separates its halal certification into four groups – Food and Drink products, Consumer products (like beauty products), Food Eateries, and Slaughterhouses (where they sembelih the animal). While none of the requirements state that the owner HAS to be Muslim, there are some important things to follow la.

For the first three, the important requirements are that you source all your ingredients from halal-certified suppliers, have at least 2 fulltime Malaysian-Muslim workers handling the food, and don’t store or make non-Halal stuff in the same area. Larger companies will need to have an internal Halal Audit Committee, but really, that’s about it. The rest of the requirements are actually best-practice stuff like cleanliness which all companies should already be doing, halal-certification or not. Again, click here for the full list.

The only exemption to this are slaughterhouses, which require specially trained Muslim slaughtermen, checkers, and supervisors in order to make sure that the animal is kept and slaughtered according to Islamic practices. In fact, this is so detailed that Jakim has a 30-page standalone document outlining the requirements and procedures! Aside from these, the application process isn’t as hard as you think. Two years ago, we called Jakim posing as a cilisos manufacturer (what else?) and we found out that:

Looking at their current manual for Halal applications, it seems that this hasn’t changed.

Unfortunately, Jakim didn’t layan our calls this time around, but one of the non-religious reasons why Halal certification is open to non-Muslims is the argument that not only are Muslims assured that what they’re eating or using is 100% religiously okay, but also non-Muslims can benefit from knowing that what they’re buying is made above and beyond standard industry requirements. But the other compelling reason is because… 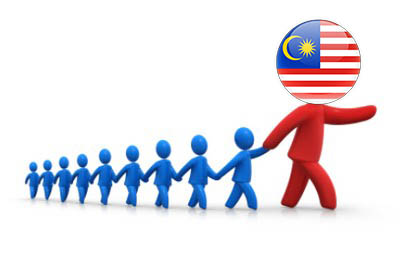 The global halal industry is estimated to be worth US$2.77 TRILLION a year, with Malaysia getting a US$9 billion (RM37.7 billion) slice of the dijamin halal pie in 2014.

Malaysia is also noted to be highly aggressive in promoting the country as a hub for the halal industry, not just for our local products but also in working with international corporations and even non-Muslim countries like China and Japan to develop halal products and global standards (our standards are known to be among the best, btw). In fact, some manufacturers in China were caught illegally sticking our Jakim halal logos on their products to increase sales!

The reason why we got so good at this is because we’ve been working on our halal standards and laws since 1974 and tapping into the economic potential of the halal industry since 2008. So from a purely economic standpoint, it wouldn’t make sense to limit halal certification to Muslims when we’re already working with non-Muslim countries in the first place. Ikiam has stated that helping Muslim companies get Jakim’s Halal approval would be their first priority before their own stamp, which we find no argument with. Again, it’s not meant to be a replacement.

However, the flaws in this idea was pointed out by, ironically, the Malaysian Muslim Consumers Association (PPIM) – aka the Cadbury boycott guys. They’ve pointed out that not only would a new logo violate the Trade Descriptions Act, it would also create unnecessary competition and confusion in the market – exactly the same reason why our laws were changed to put the issuing of Halal certification under a single authority in the first place:

“Felda will want to issue their own halal logo too. Maybe the Land Public Transport Commission (Spad) will want one too.” – Nadzim Johan, PPIM chief, as quoted by Malaysiakini.

Considering how so much of trust has been built on our current Jakim certification and logo, it seems almost counterproductive to have a second logo to “verify” that the companies are Muslim-owned. Amanah Communications Director Khalid Samad thinks that this may even cause Muslim traders to become complacent:

“Muslim companies should not sacrifice quality and competitiveness by taking advantage of their status as Muslims,” – Khalid Samad, as quoted by Free Malaysia Today.

Instead, PPIM points out that many small Muslim traders can’t afford getting Halal certification despite already following halal practices, so the better idea might be for Jakim to issue temporary halal certificates to help these traders break into the market.

Another point is the cost of issuing out these new halal certificates and paying for the manpower to run inspections and process the paperwork. Ikiam says that they’re not charging for their certificates, so we have to wonder where the money is coming from. Well, RISDA is hoping the government gives them the RM1 Billion budget they requested for (they got RM852 million this year), so….. And lastly, this new logo would create further segregation among Malaysians. It’s kinda like opening a shop and hanging a huge banner that says “We are a Malay company” or “We are a Chinese company” and so on. As it is, we’ve already had an issue about segregated carts for halal and non-halal shoppers, which you can kinda justify (if you really want to) on the basis of Hukum Syarak that halal items should never be transported with non-halal items. But when both are halal, with the only difference being the people who make it, well… we also dunno how to justify la.

So if it ain’t broke, don’t fix it… Try improving it instead. We’ve come to a time when the concept of Halal has gone beyond religious boundaries – it’s also proven itself to be a strong marketing buzzword in both local and domestic markets as well.

As it stands, this is one field that Malaysia has a huge advantage over its competitors. We’re a global leader in Islamic banking, a sector that’s been increasingly popular with non-Muslims. And while we may laugh about failed ventures like a halal airline or a halal car, this level of experimentation has led to the development of a Halal vaccine that doesn’t contain pig gelatin.

While there are some weaknesses in Jakim’s certification processes (such as having companies do their own evaluations), looking into policy changes like PPIM’s temporary Halal certification idea, or even answering media inquiries *COUGH*; it’s something that can be fixed internally within the current system rather than introducing a whole new one.

So the question is this – if Islam places such importance on unity among Muslims and non-Muslims alike, and if we can all stand to benefit from Halal products and services, shouldn’t we strive to improve it together as a nation rather than rocking the entire system for the benefit of a particular group?