(This article is originally written in BM. Click here to read it) Well a new Johor Menteri Besar, Dr Sahruddin Jamal, was sworn in on April 14, but how long will he stay there? We look into the past to see how many Menteri Besars have left their posts because of their clashes with Malaysian royalty.

1. Dato Onn Jaafar criticized the Sultan of Johor for selling his father’s property

For those who don’t know, Dato Onn Jaafar was the founder of the original UMNO and one of the pioneers in the Malaysian political scene. In fact, this is why he wasn’t selected during his political rivalry with Tunku Abdul Rahman who was more inclined to traditional nationalism during the issue of the appointment of British Deputy Commissioner in Malaya. At the same time, he held on to the principal of freedom of speech in criticizing policies and the government. Furthermore, Dato Onn got himself in trouble with the Sultan of Johor after he expressed his unhappiness with the Sultan who sold his ancestral home. The royal palace didn’t take his expression kindly and fired him in June 1920. He only came back in 1922 when Tunku Ismail managed to persuade Sultan Ibrahim to get him back. Tun Mahathir also mentioned what Dato Onn did during the first time he wanted to amend an act in the Federal Constitution in relation to the immunity of Rulers in Malaysia; which resulted in a major controversy at that time.

“The late Tun Hussein Onn, when he was Prime Minister, made a speech during a meeting with the Council of Rulers that was attended only by the Rulers or their representatives, that reprimanded some of the actions of the Rulers that should’ve not been done in the first place, but his advice wasn’t effective” – Tun Mahathir, translated quote from his Parliamentary speech, 18/01/1993

At that time, the Rulers were immune being tried in court proceedings, so in 1993, a Special Court for Rulers was made just in case they did anything wrong.

2. Sultan of Perak didn’t shave because he was unhappy with the Menteri Besar?!

In the case of Perak, there was a crisis between the late Menteri Besar Tan Sri Ghazali Jawi and the Sultan of Perak. Ghazali initially resigned in 1960 when he was sent to Egypt to be an ambassador. But in 1974, Ghazali was once again the Perak Menteri Besar after Tun Abdul Razak made an appeal to the Sultan. But Ghazali Jawi was only appointed under the condition that he would only be Menteri Besar for two years and after that the Sultan may choose whoever he wanted as the next Menteri Besar.

So what happened after the two years were up? Ghazali Jawi apparently didn’t want to resign. This time, the late Sultan Idris of Perak got a headache trying to deal with Ghazali and decided to protest by not wanting to attend any event that Ghazali was attending and …

“The Sultan took a vow to keep his beard and mustache as long as Ghazali Jawi was Menteri Besar” – Mokhtar Petah, Siapa Bakal Menteri Besar Perak

When Ghazali finally stepped down, the Sultan was finally willing to shave which they had a ceremony for. 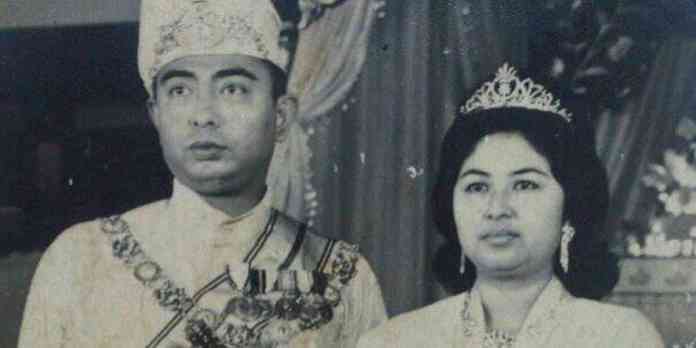 Sultan Idris before he went all ‘No Shave November’. Image from orangperak.com

In 2009, history repeated itself when the Perak Menteri Besar at the time, Nizar Jamaluddin, asked for the State Assembly to be dissolved after 3 Pakatan Rakyat state legislators defected causing the state government to collapse. Nizar allegedly didn’t like the Perak royalty and Sultan Azlan Shah personally told him to resign but at the time Nizar had only been the Menteri Besar for 11 months only (kinda the same with the Johor MB case now).

But it’s important to note that Perak has their own law (Article 16(6)), where the Menteri Besar cannot be fired by the Sultan on the grounds that they don’t friend each other. The Menteri himself has to tender his resignation if the members of the assembly loses confidence in him. The matter was brought to the Kuala Lumpur High Court and apparently the court was more favorable to Nizar based on the Perak State Constitution saying that he was the rightful head of the Perak government. However, the Court of Appeal overturned the High Court’s decision and confirmed that Barisan Nasional which had sworn in a new Menteri Besar for Perak should remain in power.

NAH, BACA:
[UPDATED] How the Teoh family successfully sued the gomen for their son's death

3. Datuk Abdul Rahim Bakar was dismissed for interfering with the logging quotas

Heading to the East Coast, we have Datuk Abdul Rahim Bakar, the Pahang MB who had to resign after 6 months before the general elections in 1982. This section is mainly from Zainuddin Maidin’s book, Hari Itu Sudah Berlalu. Datuk Abdul Rashid Abdul Rahman was the Pahang Menteri Besar for a short while before it was taken over by our former prime minister, Najib after the elections that year. This was because Datuk Abdul Rahim Bakar was said to have corrected the state’s administration in terms of the logging system. He introduced and open tender system for companies to acquire logging areas in Pahang, especially to those who were offering more money, and the Sultan of Pahang didn’t like the idea of him doing that. This kind of logging. Image from theconversation.com

The Pahang royalty apparently didn’t like him so much that he wasn’t allowed to give a speech during one of the royal ceremonies when he was invited to the palace. Then after that year he wasn’t invited at all until he was fired in 1983.  Even though he was considered a controversial Menteri Besar, he was commended for successfully developing small towns and having a clear vision in his work (according to Zainuddin Maidin in his book). He also tried to emulate Tun Hussein Onn in his actions to transform Pahang socially and politically. 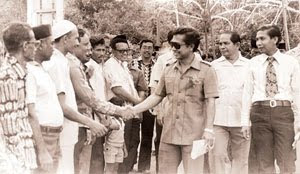 Datuk Abdul Rahim Bakar at a welcoming ceremony greeting the people from a kampung.

4. Idris Jusoh who was loved by the rakyat so much that they protested when he was forced to resign

Within the span of 10 years, there were many replacements for Terengganu Menteri Besars. Anyway, the issue started when Idris Jusoh wasn’t well liked by the Sultan of Terengganu, Tuanku Mizan Zainal Abidin in the first place and ordered him to resign. But Idris Jusoh was from Besut, Terengganu and he had his own followers who liked the way he did things when Barisan Nasional took over Terengganu that time.

Due to the dissatisfaction with the Sultan’s orders, protest banners appeared around some areas in the state. Some of which were quite risque … 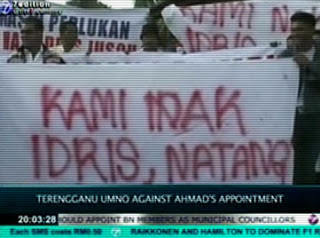 Banners of protest when Idris was ordered to resign. Image from siasahdaily.blogspot.com

Nevertheless, Idris Jusoh agreed with the decision to not be the Menteri Besar for a second term. Given the heat of this case, there were 4 investigative papers opened from 26 complaints made during the crisis. Idris Jusoh was later replaced by Kijal’s ADUN, Datuk Seri Ahmad Said as the 13th MB after getting consent from the Sultan of Terengganu.

The Prime Minister at that time, Tun Abdullah Ahmad Badawi, wasn’t happy and disagreed with the Sultan’s appointment of the new Menteri Besar because it was “not in accordance to the constitution” but that was pretty much it la. Few years after that, Ahmad Said was also forced to step down. At the start he didn’t want to and threatened to reveal government secrets but in the end he left as well.

Bonus Point: Mat Taib eloped with the Sultan’s daughter but got fired for something else!

The position of Menteri Besar in Selangor has kinda always filled the news more than any other Menteri Besar. After a few years of holding the Selangor Menteri Besar position, Mat Taib caused an uproar when he married again and this time secretly to Tengku Zahariah(!!) who was the daughter of the Sultan of Selangor. “The story of this marriage had been going around for months and the Sultan of Selangor forgave Muhammad Taib and his daughter already. But, Prime Minister, Tun Mahathir, saw that the reports regarding this issue were still quite excessive” –  Zainuddin Maidin, Hari Itu Sudah Berlalu

However, this controversial marriage didn’t last long, Mat Taib and Tengku Zahariah divorced after 4 years. But this wasn’t the reason why he stepped down from his Menteri Besar post because there was another controversy surrounding him in 1997. This time, he was arrested by the Australian authorities for not declaring the millions of dollars that was found in his suitcase as he was leaving the country. He was found not guilty after saying that he couldn’t understand the declaration forms that was in English.

Malaysia is still a constitutional monarchy. Let’s clarify what that means. What a constitutional monarchy means is thatthe Sultan or Agong(the monarch la) in a parliamentary democracy is kinda like the symbolic head of state who mainly performs a representative and civic role, where as the executive power comes mainly from the Dewan Rakyat and the Prime Minister, and that they are all subject to literally the main rule book of the country – the Federal Constitution.

“It must always be remembered that constitutional monarchs are governed by the law of the land, in which the Constitution is supreme.” – Kadir Jasin, The Star, 08/04/2019

However in Malaysia, the kings also have a lot of support from the people, and also certain Ultimate abilities in the constitution, which in turn, gives them power (because the government abides by the will of the people). We’ve seen this dynamic come into play in Johor alot particularly during GE14, and also before the election when the council of rulers was taken very very seriously.

At the end of the day, Malaysia truly is a unique place to call home, and having two branches of power isn’t necessarily a bad thing.