Guess what!? Our humble nation is finally ahead of the rest of the world (almost). We’re currently the 2nd biggest market in the global vaping market! And it’s a HALF A BILLION RINGGIT INDUSTRY! We’re only losing out to the US of A!

According to recent global market research, the vaping industry is growing very fast, and it’s set to be HUGE in the coming years… BIS Research estimates that the global e-cigarette industry will grow more than 22% from now till 2025, making it a market worth about $50BILLION!!! That’s USD yo, imagine that in RM after conversion!!!! The anatomy of a tiny big moneymaker. Photo from cen.acs.org

Ok, so it seems like vaping is poised to be very big business  in the coming years, and a good amount of Malaysians have already picked up vaping. Current estimated users stand between 250,000 to 1 mirrion!!!

But HOW!? WHY vaping so hebat here in Malaysia? (first one gonna be quite obvious k?)

P/S: We are not condoning smoking, but if you’re gonna smoke anyway… We Malaysians are always looking for a good deal… so let’s tap into our inner China Man and do the math on which habit costs less to maintain. Let’s compare the long term cost of smoking 1 pack of regular ciggies per day against vaping. Get ready for some MATH! But for as little as with RM200, one can get a very decent starter kit and materials to start vaping for a very long time (excluding the e-juice). The average bottle of e-juice is 30ml a pop, and the price is varies from RM30-RM55 for local juices and RM80-RM130 for juices imported from countries like the USA. On average, a person will vape about 3ml of e-juice a day, so that works up to about 3 bottles of e-juice a month. 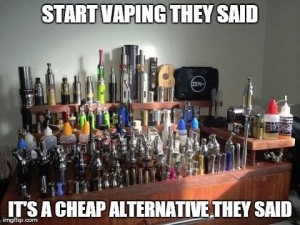 So this means… if a person were to switch from ciggies to vaping for a year, he/she would basically save more than RM3,400! Malaysians already have a predisposition to accesorizing small electronic things. Remember Tamiya cars and how people would buy spare parts and modify the cars just so they can go that extra 0.000003 second faster (kinda like F1 for smurfs)? It’s still a massive industry today, with races taking up prime locations in big malls, and shops EVERYWHERE. Well… Vaping devices have come a long way and there are SOOO many choices when it comes to equipment. From various types of mods to different varieties of tanks and atomizers, there’s a lot of room for people to experiment with different combinations, even to the point of creating custom-built devices for themselves. Ahh….. all this in the name of getting better flavour and bigger vapour clouds. (Or bigger ego too, hee hee.)

With customized builds, just like Tamiya cars, a lot of vapers end up with a collection of vaping equipment and spare parts. Plus there are makers out there who do very artistic custom builds featuring carvings and what not. In fact, some super mahal devices have even become collectors’ items!

3. Malaysians sure got more e-juice flavours than everyone else Photo from thejuicemachine on FB

There’s a mind boggling range of e-juice flavours out there ranging from straight up fruits like Strawberry, Pineapple, berries and Mango, all the way to dessert flavours such as Vanilla Custard, Coffee, Tiramisu. But didja know that there are Malaysian favourites such as Sirap Bandung, Teh Tarik, Mango Lassi, and even Durian? Heck, there’s even a flavour called Jagung Durian!  No news on whether or not there’ll be any sambal belacan flavour coming though.

And much like the Tamiya effect, right now, Malaysians have also taken to making their own e-juices. There are also a lot of tutorials out there on how to make your own e-juice, and you’ll be surprised that the ingredients pretty easily sourced! So yeah, everyone can now be like Heisenberg from Breaking Bad… or shall we say…ehem, Vaping Bad…. *cough cough*… For making your own e-juice, you pretty much need about 5 ingredients: That’s right, bruh! Some ingredients used for e-juices are originally for baking and candy making! That means you can find them at ur local baking supplies shop lo (nicotine of course cannot la).

4. We’re also quite enterprising one… Vaping is pretty big business here in Bolehland and you’ve probably seen a number of vape shops popping up everywhere. Fun observation: most of these vape shops are owned and run by Malaysians! You can find some of the major ones here. Vape Empire alone has almost 50 shops nationwide and counting!

We also have many local e-juice brewers who are booming and supplying to outlets nationwide and overseas. TheJuiceMachine is one such company, and they carry around 100 different brands of Malaysian e-juice! And that’s not ALL of the brewers in Malaysia, there are many many many many more…

Plus, if you go on to YouTube, you can also find many Malaysian vape reviewers eating up your data. One of which is former radio DJ and 1-pack-a-day smoker-turned-vaper, Mr Richard Ng, who’s got over 20k subscribers on his channel! So yeah, don’t play-play….we Malaysians are quite the authority when it comes to vaping. 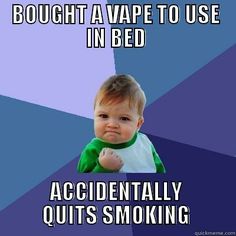 Angmoh fellers all eat atas veggies like kale, Jap don’t even cook half their food. Malaysians deepfry everything, and on top of that WE SMOKE LIKE CHIMNEYS! Not only do we have 4.7 million Malaysians (young and old) smokers, we also generate the 2nd biggest illegal cigarette market in Asia. Aiyoooooamah.

Ok, sebelum zaman vaping, people who wanted to quit smoking could only rely on nicotine patches, gum, or just go cold turkey. Most of these methods addresses the issue by giving smokers an alternative method to get their nicotine fix (which is one of the most addictive aspects of cigarettes), but don’t address other aspects of smoking that people are so used to, such as the physical action of smoking, the sensation of inhaling smoke, and also the social element of hanging out with friends and colleagues for smoking sessions.

Vaping addresses all those issues while offering different concentrations of nicotine. This means that you can start from as high as 21mg nicotine, and gradually work your way down to 18, 12, 6, 3mg and eventually 0mg. This way, you can eventually stop your nicotine addiction. And should you choose, even quit vaping altogether at the very end.

While not 100% safe, studies have shown that it is much much safer than smoking and works extremely effective as a tool to quit smoking. Even in the UK, smokers have been encouraged to switch to vaping, and Public Health England has come out to say that vaping is 95% safe than regular smoking! Well, some people have cited health reasons… but most of those arguments have come into severe questioning, especially since the UK already provided studies stating vaping as a healthier alternative to smoking. And vapers are well aware that it’s not 100% risk free, but it is a safer alternative to traditional tobacco products in the market.

Some folks have also come out to say that the gomen is trying to protect big tobacco firms because vaping is disrupting their industry in a huge way and making them lose money, or even… *gasp* protecting fake (i.e. “contraband”) cigarettes.

Malaysia did after all lose RM1.9 billion in tax revenues in 2012 due to fake ciggies – what if that were all going to someone’s pocket? If that really is the case, it would not be unique to Bolehland. Haih, it’s almost like Uber and Malaysian taxis again.

As for the the local vape industry players… They don’t want a ban of course, but they want proper regulation! With regulations, e-juices can be made following strict guidelines to ensure safety and quality. At the same time, nicotine content would be properly controlled. This way, vaping can stay a healthier alternative and not become a vessel for other more poisonous or sinister chemicals.

In fact, back in 2013, it wasn’t vaping devices that were almost banned, it was the e-juices. This is due to the fact that Nicotine falls under the group of products listed in the Poisons Act of 1952! In terms of vaping devices and its safeness, proper regulation will help ensure that they are all up to SIRIM standards and contain enough safety features so they won’t go boom in your hands.

Another concern has been that kids under 18yrs old have been picking up vaping. However, most vape shop owners will tell you that they don’t sell to kids and that it would kill their industry if people did. Unfortunately, without proper laws and regulations, it can be quite susah to take action on irresponsible people while banning the sale and use of vapes to kids.

Another benefit of regulating the industry, is the fact that our gomen will have much more control over it. Then comes a proper tax structure, and a large-scale enforcement on rules. In the end, if dealt with correctly, vaping can help give smokers a better, healthier option while boosting our weak economy at the same time. (We haven’t even begun to talk about how it won’t stink up your clothes like secondhand cigarette smoke does.) So… benefits for the rakyat and the gomen?