BTW, by “kids” in the title, we actually meant “university students” #sorrynotsorry. Anyways, let’s start with a story:

On August 25th, a Domino’s pizza delivery guy (no, this one is NOT a sponsored article) received a strange delivery request – On the sticker, instead of an address and a name, it was simply stated “Sekumpulan remaja #OccupyParlimen“. Confused but yet overwhelmingly committed to his vow of a 30-minute delivery time, he speeds of towards Jalan Parlimen… not knowing what to expect. To his surprise, he doesn’t find a bunch of kids in uniforms on a school visit to the Malaysian Parliament – what he finds are a bunch of college students camped on the street OUTSIDE the Parliament guardhouse holding banners and placards.

By sheer chance, he stumbled upon #OccupyParliament, a group of university and college students who vowed to camp outside Parliament until PM Najib stepped down. He delivers his deliciously cheesy payload to the surprised students, telling them it’s already been paid for, and rides off into the pizza sunset.

The story above was based off our interview with some of the students from #OccupyParliament describing how members of the public showed their support with food, umbrellas, and kind words; from blind men…

…to Pizza Hut and even Members of Parliament. While some of you might be going “Whoaaa… Student Power!” since they’ve been camping outside Parliament for the past two months, let’s quickly run through what happened:

The event started with a press conference in front of Bank Negara, followed by a 1.7km march to Parliament.The initial group comprised of 30 students from various local universities and colleges who marched on despite the rain.

When they arrived, the coordinators made the decision to comply with any instructions given by the authorities (except leaving), including being 50 meters away from the security entrance. The crowd grew to about 100 people over the day, and ended with about 30 students having book discussions and sleeping by the sidewalk. Ooh ooh, and they used the bathrooms at Tugu Negara for showering and, um, bathrooming. The next day involved more well-wishers from the public showing up (such as the pizza and the blind people mentioned earlier) but also attempts by the authorities to get rid of them. It started with warnings from DBKL, but they couldn’t do much since there weren’t any tents or structures erected at the site.

The police arrived in the afternoon to measure their distance from the Parliament security entrance, but the real trouble started at about 10:15pm when the cops returned and asked the protestors to vacate the premises as they were still within the 50-meter zone. When the protestors responded by moving further away, the cops announced that they had to clear the area in 5 minutes or face arrest:

By 10:30pm, the protestors were asked to get into the police truck. The organizers asked if it was an arrest, because if it were, then the cops should properly arrest them… so the cops did. Seventeen students were arrested while others managed to make a run for it.

We won’t go into details of their stay in jail, but you can read an account of it on The Malaysian Insider.

Some of u more cynical gaiz might be sniggering about how this is a sign of the quality of students in the country… making big statements but giving up the moment things get tough, but perhaps that isn’t the whole story. To get a better idea of what went on, we spoke to Najib.

Chill yo. Not this Najib: 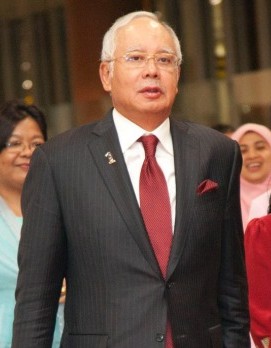 This is PM Najib. Image from the Sydney Morning Herald. Khairol Najib is the chairperson of Kesatuan Mahasiswa Malaysia and Persatuan Mahasiswa Islam Universiti Malaya, one of the student organizers of #OccupyParliament, AND among the 17 arrested in August. And yes, he’s heard jokes about his name many, many times. But hey, at least he wasn’t named Mahathir  😆

Before we went into details about #OccupyParliament, we were curious to know a little more about Khairol; like how did he get into activism and, more importantly, what does his mother think?

Khairol says that he’s been involved in student activism and politics since his first year in UM, when he was introduced to it by a senior who brought him to discourse sessions.

*”Mahasiswa” is the term used to refer to university and college students.

Of course, his family initially disagreed with his choice of extracurricular activities – mostly because it usually ends with Khairol spending time in jail or facing suspension from UM. After his first organizing role bringing Anwar Ibrahim into UM for a speech put him in danger of being expelled, Khairol tells us that he had to drive home to Teluk Intan to explain things to his mom (who found out about it through Facebook). He said to her:

Khairol says that after the second arrest – this being his third – his family has started to accept his passion for student activism. After his release from this arrest, he didn’t have to rush home; instead he called and had what he described as a “calm conversation” with her.

Oh, and actually, #OccupyParliament was surprisingly well-structured for a student protest When you think of student activists, you might think that it’s just a bunch of university students with nothing better to do than chant slogans and making trouble for the authorities. However, the amount of planning and coordination they’ve put into this might surprise you.

For one thing, Khairol clarified that the actual movement is called Langkah Siswa while #OccupyParliament was the name of the event. You can check out their Facebook page linked above.

They also made three overall demands, which were:

In case you were wondering, a caretaker government is kinda like a temporary government put in place until a proper election can be held. Khairol argued that this was the best option if PM Najib were to step down since there isn’t enough faith yet in the Elections Commission to ensure a fair election.

Even the locations they’ve selected to meet (Bank Negara) and march to (Parliament) weren’t random. Khairol says that the two locations were chosen for their symbolism – Bank Negara as a symbol for money/economy and Parliament as a symbol of democracy. The coordinators also made it a point to comply with any instructions given by the authorities once they got to Parliament, including being 50 meters away from the security entrance. Umm… any instuctions except to pack up and leave la  😀

Aaaaand lastly, it involved all races. Yeah, it’s something that we thought we should mention after Bersih 4.0 was accused of being a “Chinese rally” due to the high Chinese turnout. Khairol noted that the students and supporters of #OccupyParliament were from all races. In fact, maybe we should also point out that even the arrests were super muhibbah; with 7 Malays, 9 Chinese, and 1 Indian put in jail. But then if they put so much effort into it, why did they cancel it so soon? Well, it’s because…

They’re not done yet, cause something bigger’s about to happen

Khairol explained that the August protest was to drum up interest and to work out any problems they might come across. It was also called off due to Bersih 4.0, as they felt it made more sense to support Bersih rather than stay on as a “competing” group.

With the third parliamentary meeting happening on the 19th (3 days away at the time of writing), LangkahSiswa aims to again stage another #OccupyParliament, but this time with under a new name – #1000LangkahSiswa. If it isn’t immediately obvious, it’s because they’re aiming to have at least a thousand people engaged in a sit-down protest outside the Parliament security entrance.

And they haven’t been slacking off in the meantime either. Khairol tells us they’ve been going on roadshows to public and private universities and colleges around the country to educate and encourage students to voice out their opinions and participate in the rally. Khairol noted that it would be a challenge, but he remains confident that they would achieve those numbers since the August rally had already sparked some interest:

Of course, we’re well aware that there are those who’ll say that another rally won’t make a difference… because we said the same thing too! However, we also mentioned that where a rally may succeed is in changing mindsets and encourage political awareness in the long run.

For instance, a recent survey by Merdeka Center indicated that those without access to the internet knew the least about the issues surrounding 1MDB . This leads to the whole rural/urban reach of information where urbanites with access to wider sources of information (like CILISOS. Yay!) are able to make better political and voting decisions compared to those who rely on the national newspapers. It can be argued that students from rural areas who attend the Langkahsiswa roadshows or rallies may end up spreading this awareness to their friends and family back home, or as Khairol puts it:

So whether you’re a student or not, do consider supporting these guys when they’re out there on the overhead bridge leading to the Parliament building because they’re putting A LOT at risk. It’s not just facing disciplinary action from their respective universities or colleges (Khairol and three other students were asked to attend a “mandatory discussion” by UM on October 8th), but they’re also going to have to juggle with classes and social activities as well. And there’s also the discomfort of having to sleep on the pavement, facing bad weather, and having to walk to Tugu Negara to use the bathroom. People have always said that students are the voice of the future generation, so what better voice is there to be heard by the MPs as they drive in to Parliament? And who knows if any one of these voices may one day be INSIDE Parliament rather than by the sidewalk leading to it.

After all, the three people below started out as student activists and they look like they’ve done pretty well for themselves, right?