The general perception of older print media outlets like The Star is that they’re kinda like Nokia 3310s in a smartphone world – dependable, , and still around despite being outdated. Because really, except for maybe your parents, who even reads newspapers nowadays? And while they do have online versions it almost seems like it’s just… an online version of the newspaper edition.

In a time when online sites are constantly trying to bring their A-game to getting clicks and shares (CILISOS included), it just seems like these fellas totally missed out on the clickbait memo. Until recently, that is. Last year, R.AGE – The Star’s youth publication – won a prestigious journalism award for their investigative piece on child grooming, which exposed how child predators use the internet to prey on teenagers. And over the last few weeks, they’ve been #winning the Malaysian public thanks to their mysterious cookie-deserving Facebook admin(s) who have come up with some really LOL-inducing Facebook captions. But just in case you aren’t sure what a caption is… If you haven’t seen them yet, you’re in luck because… well, that’s the title of our article la  😎 . So let’s take a look at…

1. The time when The Star’s admin got Dirrty 2. The time when the admin showed they had a few Twix up their sleeves 3. The time when the admin started Baggin’ likes on FB Fro-dont do this at home!

4. The time when the admin finally got to post about a different kind of cock getting stuck 5. The time when the admin made a dry story juicy Impressive considering how dry it is. The topic, not their chicken.

It gets better though. When you click on that See Translation button, you get… 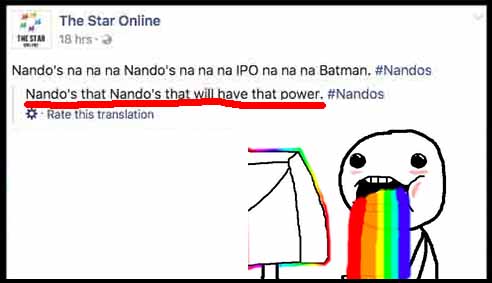 6. The time when The Star ran a story about teh creative ways people smuggle drugs into Malaysia Was he trying to smuggle…. pot?

7. The time when The Star Online’s admin went full loco We wonder if the cops tried…flushing him out?

8. The time when The Star Online’s admin gave the most realest advice So they opened their… arms in friendship?

9. The time when the admin went totally #nochill You gotta admit, its a pretty slick caption.

BONUS:  The time when admins from other sites sent words of encouragement Who are these admin fellas? I wanna buy them a cookie! So good news is that we asked some people we knew at The Star, and they replied! The bad news is that they won’t tell us who the admin are, or even if it’s one person or a few people:

“We wish not to reveal the identity of The Star Online’s Facebook admin(s), as we don’t want competitors to headhunt him/her!” – Philip Golingai, Editor, The Star Online. As relayed through our friends at The Star.

Of course, Philip Golingai was joking, but they really want the admin to remain anonymous la 😐

However what we DO know is that with the digital age, the roles and functions of journalism have changed from when newspapers were the medium of choice. And even journalism schools are still debating on how to educate journalists to remain credible during a time when clickbait and videos are the preferred sources of news for many people.

“Today … the capacity to identify and master emerging market trends and media technologies and to integrate them quickly into journalistic work—is as critical to credible journalism education as [older forms of journalistic practices].” – The Knight Foundation, as quoted by Columbia Journalism Review.

So, with these captions as well as with the R.AGE team, it seems that The Star are trying to shake things up while keeping to the traditional form of journalism that doesn’t rely on memes, clickbait or bad speeling *cough*

And based on the comments that we see on their posts, it seems that they’re doing a really good job. So do check them out on Facebook and let them know if you think they’ve brightened up your day 🙂