You probably wouldn’t see this happening in the relevant highways.

Although we’ve written an article weighing the costs and benefits of govt decisions concerning tolls, we decided to check out the historical trend of toll rates for some of the highways: NKVE (New Klang Valley Expressway), PLUS (North-South Highway), KESAS, LDP and Sprint.

We painstakingly searched the net for info on annual toll rates in previous years (You did know that Google can search news by date right?).. But any stats on these rates were not easy to find, so we had to do the data crunching ourselves…

But first, we need to put some assumptions on the data So, there isn’t quite ONE place to look for toll data (#malaysiabarutapilama). So we used A LOT of sources such as news reports, research docs, highway articles, infographics and toll calculators, and then tabulated them. Also, to keep our minds from exploding, we have a few more caveats. 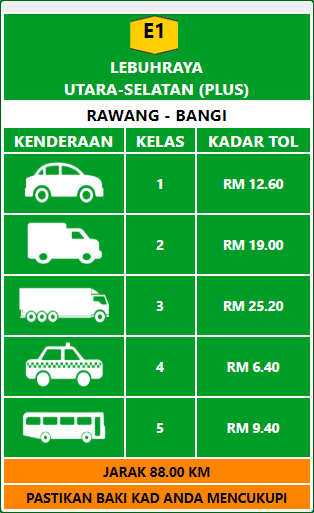 From a toll calculator.

A 146.5km road trip from Gopeng to Juru charges you RM19.90 for the whole journey, which means the toll rate here is 13.58 cents/km. But an 88km trip from Rawang to Bangi charges RM12.60, so the toll rate is 14.32 cents/km. So because it’s hard to take into the account the differences, we assumed that it’s the same throughout the whole highway (maybe 13.60 cents/km for example).

Here’s what we found. Then, from this table, we get.. this chart! In 2011, UEM (parent company of PLUS) indicated that toll prices would grow by 10% every 3 years, but based on the chart, that hasn’t really happened. Even the LDP which seems to have gone up the most is only about 20+% every 3 years. Plus, these figures were just guesstimates since we came across some challenges in determining the actual rate.

NAH, BACA:
Like to goncang? Here's how you can win the X70, Proton's first ever SUV

No wonder we had to make some assumptions to make our job easier huh.. And yeah, the figures may not be 100% accurate and certain. But even then, at least you know roughly how much money you might need to pay for your toll when you’re driving in town, right?

Although other countries like China and India also didn’t escape toll hikes, Lim Guan Eng added that, in the govt’s efforts to reduce the rakyat’s burden of rising living costs, freezing toll hikes for the 32 highways was a marked enhancement from the Budget 2019 announcement made in November, which planned to freeze all toll hikes for only intra-city tolls instead of the inter-city ones mentioned.

In Pakatan’s manifesto, its 6th promise is to abolish tolls.

“The PH Govt will review all highway concession agreements. We will renegotiate to obtain the best value for money for the people so that we can take over the concessions with the ultimate view of abolishing tolls gradually.

We believe that infrastructure like roads and highways are the responsibility of the government for the people. The PH Govt will provide fair compensation to the affected companies.” – Promise 6 of PH Manifesto.

While many would celebrate this move, the govt will have to tanggung the cost. Lim said that, starting from 1st Jan 2019, the compensation payments to the relevant toll concessionaires for the 21 highways will be RM972.75mil, for the 8 highways for buses will be RM1.68mil and for the motorcycle tolls in the 3 highways will be RM20mil. So, add these together and the govt pays… RM994.43mil!

But despite the country’s lousy financial position weighing down on plans to abolish tolls completely, the current move is a small step to doing so. And Lim believes that, as the financial situation recovers, better things await. Hopefully, one of them would be having more readily available stats on things like, well, historical toll rates.

Let us know in the comments if any of the data is wrong. Or better yet, if you’re from PLUS or SPRINT, or your name is Anthony Loke.