Aite guys. A little while ago, we ran the Malaysian Makan-Makan Survey, which, like its name, revolves around Malaysians and their #1 passion: FOOD! And together with our friends from DuitNow, we’ve got some pretty interesting insights to share.

But… why DuitNow so kepoh wanna dig into the dining lives of Malaysians? Cause they know that regardless of where you eat, how you eat, why you eat, or when you eat, dining is ultimately a social thing for Malaysians… and it’s all fun and games until the bill arrives O_O

Before we get to the solution, let’s take a look at some of the stats we found from our survey:

1. Nak berdating? Plenty of women think that you should split the bill

Although men are traditionally expected to foot the bill when it comes to dates, in today’s day and age, we’re beginning to see a shift in this mindset. Interestingly, out of those who chose to split the bill, almost half of them (49.5%) identified themselves as women! … to be a strong independent woman!

The CILISOS office has an overpowering male presence so we asked around for opinions on this. Almost everyone of them said that guys should pay, but even so, they’d appreciate if the girl offers to pay or split the bill. “If she just sits there and expects me to pay, then quite potong stim la.” Our female staffer also says that she’d like a gentleman who offers to pay, but she would still feel really awkward and paiseh about it.

2. Malaysia’s favourite cuisine is not even Malaysian

Our country is made up of different races, so you’d imagine that the number 1 cuisine we love is something close to home. But nope – the top choice by far was Japanese (27.1%)! From the 11 common options we gave, the second and third choices were Chinese (17.2%) and Italian (13.2%).

Woah, two out of three are known for being on the atas side… Were our readers affluent though? Not really. Check out the top 3 monthly income brackets of these sushi-lovers:

Those who earned RM7k and above made up only 9.4%! So we guess our readers have quite atas tastebuds huh? Anyway, one good thing to rejoice – fast food made it to the last (1.8%) so Malaysians do care about being healthy.

3. Malaysians hate it if you’re rude to the waiter 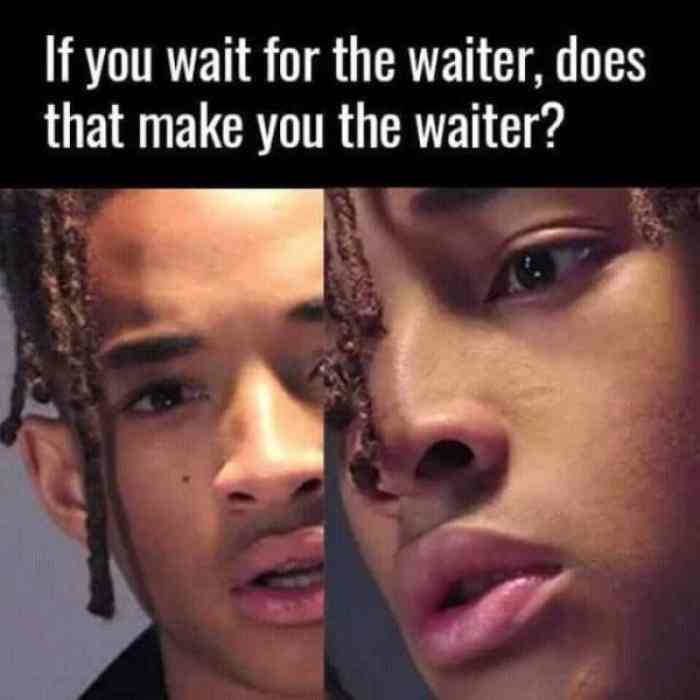 When we asked respondents about what they find most unacceptable at the dining table, we received an overwhelming response on being rude to the waiter (40.7%). Malaysians are known to be polite and friendly anyway, although sometimes we’re seen as reserved and the mind-your-own-business type.

Next on the list were screaming children (21.4%) and using the handphone throughout the meal (19.2%), but in defense of parents, managing a child is one of the hardest things to do okay… Dah lah making sure that they eat their food is one big problem, keeping them still and properly-behaved makes another one. It’s exhausting running after our little ones, especially if you’re a single parent with more than one child to jaga. When it comes to Malaysian timing, being early is like seeing a shooting star fart a rainbow in the shape of an octopus in the sky. Being late however is a norm.

Well… now you know. Just don’t apply the same metrics to business appointment or meeting your in-laws for the first time la k?

5. Not everyone likes it if a foreigner cooked local dishes

Aw man, foreign workers really have it bad here. Indonesians are the muscle behind our labour force at 50.9% of all foreign workers in this country, and Bangladeshis send home the most of their hard-earned money at RM3 billion. Nepalese’s suicide rates are so high because they’re so unhappy working here, and all of them had to cross land and sea to escape poverty, underemployment, and to provide for families back home. 🙁

So it kinda sucks to see that Malaysians get turned off when a foreign worker is employed to cook local food. But to be impartial, we understand the tradition that only a local has the tastebuds of a local, and you know how picky we Malaysians are with our comfort food. This totally bring us back to the time when Lim Guan Eng wanted to ban ban foreign workers from working as hawker stall cooks in Penang. Many people were for it, going as far to say that their cooking skills ‘suck’! But thankfully, Malaysians have more important things to be bothered with. Foreign workers cooking local food is heavily surpassed by bad service (90.9%), a dirty environment (79.3%) followed by unjustified prices (72.5%).

6. Malaysians are quite kedekut with drinks (also quite thick-skinned la)

We hate to say it but… we’ve done this too. ALL of it.

If you’re going to a nearby chapfan shop or mamak, you can expect to pay about RM0.50 (for Chinese Tea) or RM2.00 (teh o ais limau). But what if you’re going to a slightly nicer place with air-cond, where they charge RM7.90 for a can of Coke? Actually sometimes it’s not even a can, but a cup filled with ice! Coke to ice ratio probably about 30:70, so tak berbaloi if you ask us. So there’s no wonder why so many Malaysians have a habit of sharing refillable drinks (31.3%). 1 cup 2 mouths ok what?

To add to that, 13% share non-refillable drinks, which is okay, but we’ll be concerned if you guys are hydrating yourself enough lor. 19.1% are even thriftier – instead of paying for drinks, they bring their own water bottle out. We think this is actually pretty smart, but it would look a bit kiamsiap if a party of 10 only ordered food and no drinks la. O_O Just don’t drink like this cukup la. Waste water only.

On a separate note, 13.3% or respondents get turned off when they get charged for water. This number must include CILISOS freelancer June Low who went all investigative on why Malaysian restaurants do that. (Read it here!)

7. They’d rather pay RM80 for nasi lemak than have a free meal beside a dirty toilet Nothing said about eating it on a toilet bowl though. Photo taken from tripadvisor.com

Okay okay we know that sounds kinda misleading. How we got this data is by putting our respondents in 5 conflicting scenarios and seeing which one they’d rather pick:

From what we gather, Malaysians are serious about hygiene man. If you own a restaurant, yo gotta keep it clean buddy – the makan area AND the toilet. In fact, one of our writers had banana leaf in a restaurant in Bangsar (not Telawi area if you’re curious) and she could smell the sewerage stench while sitting towards the middle. That’s bad yo, made her mutton curry look like doodoo.

8. 18% of respondents admitted to cheating on their bill

You know how if you go to a chapfan/nasi campur shop, you get charged according to what you take? But sometimes the boss calculates macam tak consistent one – at times having 2 vege + 1 meat can come up to RM7, sometimes 1 meat itself can come up to RM12. So how to get the best bang for your buck?

Hide food under food! 12.1% use this strategy so they get charged less. But if the aunty/uncle spots them hiding, then just pay lor. (Not saying you should do this but it seems like an important skill in life.) Following next, 3.3% would keep silent if they get undercharged, and 2.8% have lied to the mamak anneh about what they ordered. The worst of all are those who eat things halfway and then send it back to the kitchen with a complaint or two. (Thankfully this is the smallest category with only 0.6% respondents!)

Anyway don’t be disheartened – Malaysians are actually quite honest one. We’re very happy cos 82% of our respondents said they had never cheated on our bill!

Malaysians sure have their own special dining habits…

If there’s one thing we learned from the 1,278 respondents who took our survey, it’s that Malaysians are a colourful bunch with all sorts of dining habits. But perhaps one thing we haven’t really covered is… how do they manage splitting the makan bill?! When it comes to group dining, it’s all fun and games until the bill comes. Someone will have to fork out the money first, and hope everyone else pays back. And 9/10 times, you’ll get big RM50 notes to cover something like, RM16.30. If 10 people give you big notes, then how are you gonna give them back the change?! And that’s a problem DuitNow wants to solve 🙂

You’ve probably seen it in your mobile banking apps, but what is it really? It’s a cashless money transfer service by PayNet that aims to drive Malaysians to a cashless future. It’s currently being used by 35 banks in Malaysia, and comes at no additional costs to you.

It’s for awkward and unpredictable moments like forgetting your wallet, having insufficient cash, having no change, needing emergency money… with DuitNow, just logon your Internet or Mobile banking and transfer the money instantly to any mobile number, even if it’s 10 sen! No need to share bank account details, scan QR code, yadda yaddah.

And of course, it extends way beyond dining. You can use DuitNow in any case where someone hutang you (or vice-versa, in which case please be responsible and pay up k!). To get started, just update your banking app and you’ll see DuitNow as an option for funds transfer. Just register on your favourite banking app, and you’re ready to go!

Anyway, if you’re reading this far that means you’re a data freak like us. Nah, some random, bite-sized nuggets for you. Go crazy: [Ed’s note: This nationwide survey was originally conducted in 2016, but has been kept open till today.]