UPDATE 17/7/2017: This article was originally written in the wake of Red shirt violence. Same info applies 🙂

Way back in 2016, when BERSIH 5 was about to happen, anti-Bersih group known as the Red Shirts started their own movement to counter Bersih.  Thankfully, besides the poor guy featured in the GIF below, no violent incidences were recorded.Some clashes have also been verbal, such as Red Shirt leader Jamal Yunos’ accusation that Bersih has links to the Islamic State.

But now, there’s a new ass-kicker making his way on Facebook, busting out an MMA kick on a security guard no less.

This led us to wonder how we can defend ourselves without getting into trouble with the cops (which is totally possible) and/or what legal action we can take if we were ever caught in the middle of a clash. And of course, the law works both ways, so people who happen to be wearing red shirts and run into Bersih supporters please also take note  🙂

We gave Fahri Azzat – one of our favoritest lawyers – a list of scenarios and asked him what legal actions we can and cannot take; and he started off by saying… 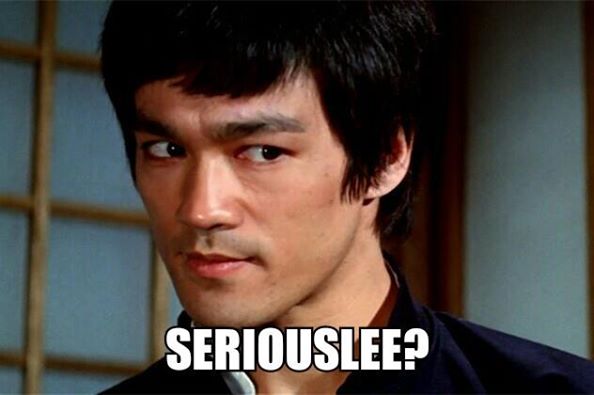 Let’s start off with what happens when you’re actually caught in the heat of the moment like, if you’re being threatened, how far can you go in defending yourself?

Off the bat, the Malaysian Penal Code actually gives everyone the right to defend themselves, their property, or someone else from criminal harm. However, this doesn’t mean you can go all Bruce Lee on people who threaten you, or even worse kill them in the name of self defense. Fahri points out two limitations:

One very important thing to note is that this is all in theory. In actual practice, it’s more of a gray area since everything’s dependent on the Facts, which in this case refers to the outcome of the police investigation. But this is already free advice, okay? More specific legal advice need to pay money wan. Nevertheless, if you’re ever faced in a threatening standoff, Fahri has the following recommendations on how to physically (and legally) defend yourself:

You can read our full article on Malaysia’s self defense laws here. But let’s say you got out of the confrontation with no or minimal harm. What can you legally do to make sure those fellas get their just desserts?

A huge chunk of this section is gonna involve assault and battery, a term most of us have heard on TV and the news. But unless you’re more legally enlightened, not many people know what these terms actually mean. For instance, assault doesn’t actually mean “kena pukul”, because it’s defined in our Penal Code as making a gesture with the intention that you want to pukul, or knowing that the other person would understand that your gesture means you’re about to pukul him.

“An example is if I raise my fist at you but not YET hit you – that’s assault. Words alone don’t amount to assault, but if coupled with an act, then possibly.” – Fahri Azzat

Battery (or Criminal Force in the Penal Code) on the other hand is to touch or use force on a person without their consent.

“For example, you approach me and do something to me that doesn’t amount to assault. I say to you “Don’t touch me”. You do. That’s a Criminal Force offence.” – Fahri Azzat And the last term we’re gonna be using is Tort, which in the simplest terms means that you have a valid reason to sue someone la. Okay, now on to the fun stuff!

NAH, BACA:
Will you get jailed for killing someone in self defense in M'sia?

“If they said “Your daddy’s so fat that when he turns over in bed, there’s an eclipse” I’m afraid your only course of action is to chuckle.” – Fahri Azzat.

But if they followed you around hurling insults about your poppa, then you can lodge a police report for Criminal Intimidation and possibly sue them under the Tort of Harassment. Similarly, if they held a press conference to announce that your daddy is fat or has links to Islamic State, then sue them for defamation yo! As a real-world example of this, Bersih 2.0’s Maria Chin Abdullah has so far lodged a police report for a Facebook posting saying May 13 would recur during Bersih 5, and is suing him for defamation over the Bersih-Islamic State statement. But of course, unless he’s a manga character, the person who hits you isn’t gonna shout out his name and IC number as he does it – so who are you gonna sue or lodge a police report against? Well, if your lawyers can prove that there’s a common intention or conspiracy between the person who committed the act and the leader, then you can sue the leader even if they didn’t personally commit the act.

But no matter how bad the insults get, no matter how fat they say your poppa is, the one thing you SHOULDN’T do is throw the first punch:

“If you throw the first punch after they insult you, then you may kena a police report for causing hurt; or if you really went to town on them, grievous hurt. But I would recommend sticking to just causing hurt – you’ll only get fined (instead of prison) if the victim agrees to accept compensation 😉 ” – Fahri Azzat

↑ Fahri is obviously joking about the last sentence. Neither CILISOS nor Fahri Azzat are legally responsible if you don’t understand lawyer humor.

But the best way to win a fight is to… not fight. It may sound like a cop-out but a less aggressive form of defense would not only lead to less risk of injury to yourself and your friends, but also to not escalate the situation into a full-out brawl. Sure, you might want to stand your ground and win the fight, but is it worth the FRU coming in and having more laws put in place to prevent the next rally on grounds of public safety because a fight broke out?

Again, this is highly situational since we can’t predict what may happen so Fahri gave us some more advice on what you can do to make your police report or lawsuit stronger:

So for everyone planning to get involved in the rallies, so take a moment to be prepared for any unexpected surprises and assess the situation before you react. We would end this with some sappy quote like “An eye for an eye makes the world go blind,” but here’s something that may be a little more relevant:

“He who fights and runs away, lives to file a police report and sue the next day” – CILISOS