So Arul Kanda is back in the limelight, and it doesn’t look good. Lim Guan Eng actually called him dishonest and untrustworthy, , and some people are saying those are actually kinder words than they would use. But way back in 2016 (which is when the majority of this article was written), we started hearing rumors that Arul Kanda was leaving 1MDB. He also sorta-kinda clarified in a Whatsapp message to Free Malaysia Today that he wasn’t going to resign from 1MDB, but only that his job was done.

My job is to come in, identify the problem, put together the solution, herd people to stay focused. I’ve done it, now I need to move on.” – Arul Kanda, as quoted by Bloomberg.

While most people would associate 1MDB with PM Najib, the company is actually led by Arul Kanda Kandasamy, who took over the position of president and group executive director in January 2015 – at the height of the 1MDB drama – to (simply put) save the company after it fell into a deep rabbit hole of debt.

UPDATE (24.5.18): Newly appointed Finance Minister, Lim Guan Eng now stated that he is actually the ONLY employee of 1MDB

After that, Arul went on a media blitz, appearing on BFM’s The Breakfast Grille with Julian Ng and Ibrahim Sani and Astro Awani to clarify 1MDB’s position, and opened himself to quite a few uncomfortable questions (which he answered). Seriously, give the BFM interview a listen and see if you’ll end up agreeing with him ↓

At the same time though, he’s been accused of cleverly wording his responses to cover up for the company, and taichi-ing the harder ones away. Either way, it’s hard to deny that this dude is handling the situation remarkably well despite the amount of bad press 1MDB has gotten, so we couldn’t help but ask ourselves: Would we hire Arul Kanda if he ever left 1MDB?

And like a prospective employer, we went around asking people what they thought of him, people like…

So here’s the feedback we’ve received about our potential candidate.

SECOND REMINDER: these responses were given IN 2016! Here’s the results of the poll we took. 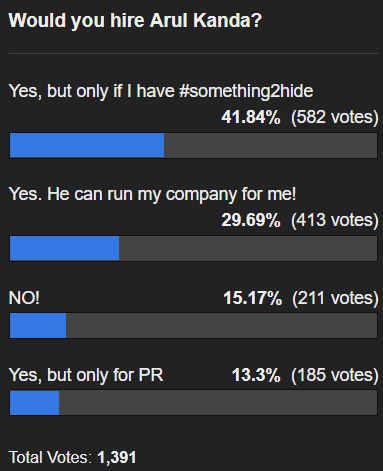 “You could almost fall in love with him” – Tony Pua

“Arul Kanda is smooth. And he is very clever. Underestimate him at your own expense. You expect an aggressive cocky person, but what you get is a highly convincing hypnotic persuader. When he speaks, if you don’t remain alert, you could almost fall in love with him.” – Tony Pua, in Whatsapp interview with CILISOS.

The thing about Arul Kanda is that he makes it impossibly hard to dislike him. Like seriously, he’s ALWAYS got a smile on his face…

He’s always nice to the media….

I would say he really knows how to handle the media well. Picks up calls, responds to messages almost immediately. Super polite and treats journalists like his equal. A very smooth, charming guy.” – Former Malaysian journalist, speaking anonymously to CILISOS.

“Arul was cordial, professional and gentlemanly throughout.” – Julian Ng, in Whatsapp interview with CILISOS.

And even when he rejects you, he does it personally. Yes, we tried to set up an interview with him, and he responded within 3 hours. Also, we never felt so fuzzywarm about being rejected. He could probably sell ice to Eskimos too. Original image from Lighthouse4Business

Okay, so you’ve heard at least two people describe Arul as “smooth”, but what’s also amazing is his uncanny ability to have facts and figures at his fingertips – ensuring a perfectly convincing answer to questions you can throw at him. Even PKR’s Rafizi Ramli acknowledged Arul’s skill as a master debater, having gone up against him in school. Full disclosure time, our editor’s sister was classmates with Arul and Ong Kian Ming #justincase #tumpangglamor.

“Arul is very slick and smooth in presenting the argument for 1MDB. It’s a reflection of his days as a debater in school.” – Ong Kian Ming, in email interview with CILISOS.

One thing that we noticed from Arul’s BFM interview was that Arul’s answers were almost snap-immediate. At the same time, he quickly caught on to contradicting points and jumped in to correct them. You can read some highlights on BFM’s podcast page, but here’s how one of our readers summarized it:

“Honestly based on his BFM interview. He is damn good at answering questions and a taichi master. The radio presenter got grilled instead, in my opinion.” – Vincent, CILISOS reader.

We thought there might have been a chance that Arul was given the questions ahead of time, so we asked BFM’s Julian. This is what he said:

“No specific questions were given, only a discussion outline. … It was a freeform, unrehearsed discussion the moment we went on the record. We did brief him that the Breakfast Grille is a no-holds-barred kind of show.”

[CILISOS: Did he reject any questions?]

Whether or not Arul was being 100% accurate or truthful is a matter of debate (later in this article, in fact!). But hey… it’s better than some of the less-than-convincing arguments from our ministers in defense of 1MDB.

“I’m sure he’s being compensated insane amounts to take up the role…” – Shanker, CILISOS reader And now comes the 42 billion Ringgit question: Whydahek did Arul Kanda even take this job? The knee-jerk answer would of course be “money”:

But in case you missed our earlier mention, Arul Kanda joined 1MDB after the lid on their financial situation was blown. Before this, he was the executive vice-president and head of Investment Banking in Abu Dhabi Commercial Bank. We might be wrong here, but it seems he was doing pretty well as it is without having to throw himself into a (in his own words) car crash:

Maybe he’s taking it as a personal challenge, or maybe because he’s looking to have the most impressive LinkedIn description ever as the guy who fixed 1MDB, but either way our own conclusion is- Not an actual quote from anyone.

Because really, with political AND business AND public opinion challenges; his job is a pretty uphill task. In an avalanche. Wearing rollerskates.

“He has an almost impossible task turning 1MDB around without stirring the hornets nest …  It was a task which perhaps he himself underestimated. Hence if he falls short of rescuing 1MDB, it is not his fault because the mess he took over was gargantuan.” – Tony Pua

According to Arul himself, he took on the job purely from a business standpoint:

“I looked at it purely as a restructuring job because that is my background … Little did I expect the investigative aspects of it and also the political aspects of it. These came after I took on the job. Frankly, it has been a great learning experience for me … Overall, if asked whether I would do it again, I would most definitely… ” – Arul Kanda, as quoted from his BFM interview.

So yes, this is a man who loves a challenge, loves what he does, and won’t back down when the going gets tough. Not just that…

“What he is, is a good poker player. He is exactly the man to head 1MDB because he can spin things his way while keeping a straight face and not break a sweat.” – Nicholas, CILISOS reader As you may have gotten the idea by now, Arul Kanda is quite the spin master. But is it only words, and are words all he has to take your heart away?

“So far all kutuk him only but look from another view: he can keep secrets, got balls to take this job, perhaps really parring down the debts and lastly, got thick skin to stand and talk to media despite most not believing him.” – Ng, CILISOS reader

Well, it seems that aside from charming us with his smile and confidence, he’s also been making some structural and policy changes within 1MDB to improve communications with the public, stop incurring more losses, and paying up their debts. To continue the rest of that car crash analogy he used:

“[In] 2016, we are now in the normal ward, we are doing physiotherapy and I hope we will be out of the hospital by the end of the year. -Arul Kanda, as quoted from his BFM interview.

But not everyone is buying it la.

This statement was made during one of Arul’s first TV interviews, and it still kinda holds water today; with the latest investigation being launched by the Swiss authorities.

Homeside as well, not everyone is completely buying into all of Arul’s statements, finding contradictions and incomplete answers to some issues.  So whether it’s to do with the Cayman Islands transactions…

“I think the biggest contradictions which Arul has made on 1MDB is with regards to the ‘units’ (earlier cash) from the redemption of the Cayman Island assets as a result of the sale of the Petro Saudi bonds.” – Ong Kian Ming

“First he said fully redeemed in Jan 15. Then declared it was cash kept in Singapore. Then it was kept in Singapore to avoid the hassle of Bank Negara in March.  But in May, after being caught lying, he admitted it wasn’t cash but assets. Then it wasn’t assets but “units” . He pleaded “miscommunication”. However, what these units were was never explained. Now we have been informed that the units are still in Cayman Islands!! Which means they were never redeemed in the first place!” – Tony Pua

“When faced with multiple grave allegations against 1MDB such as payments made to a fictitious “Aabar Investments” set up in the British Virgin Islands, he has refused to answer the questions directly and instead tried to dismiss it as a malicious conspiracy.” – Tony Pua

Or even during his BFM interview.

“I must say that I wasn’t fully satisfied with many of the answers. The one on the expensive Goldman Sachs deal was one of them. Another was the reason for 1MDB’s existence. The latter was more a personal dissatisfaction that 1MDB’s actions weren’t defensible conceptually and from a policy viewpoint.” – Julian Ng

And surprisingly, a number of our readers WOULD actually hire Arul Kanda! It can be argued that the hiring of Arul Kanda to handle 1MDB was probably one of the best business decisions they’ve made, not that there are that many other decisions to choose from (hee hee). But love him or hate him, one thing many of our readers agree Arul Kanda will be one of the best PR people you’ll ever find because…

He’s good at what he does

Ignore that last one, that’s my American friend who decided to berkepoh >:(

Of course now, with the possibility of jail time and criminal charges, perrrhappps your mind has changed? We created a brand new 2018 poll below!

Share this article:
NAH, BACA:
[Update] The DOJ is seizing more of Jho Lows' assets and gifts... Except those for a Malaysian lady?