The 1MDB story has been around for a while now. Ever since Tony Pua did his impassioned speech in November 2014, the story has developed so much that it feels just like a long-running comic book series.

But just ask any comic book fan la sure got more than just 2-3 characters. Most of the time you would have some main characters, and many supporting characters. The 1MDB story is no different. Jho Low, Riza Aziz, and Malaysian Official 1 are among the main supervillains for sure, but it seems that there are also many other supporting supervillains that people don’t give enough credit for. How many of us actually know their names (especially before watching the movie)? Well the same goes for 1MDB’s supporting cast, and that’s why we wanna make sure they get credit for their um… awesome job done too! So without further aduuu, let’s take a look at the other people who are not Jho Low, who might be involved with the 1MDB debacle.

We don’t know every single person who has worked for 1MDB, but in the past few months, a few names of former employees have popped up. It’s okay if you haven’t heard of them because prior to this, we didn’t either. But here’s what we could find about them.

Shahrol Azral Ibrahim Halmi, judging from this press statement from 1MDB, was the CEO of 1MDB until he was replaced by this one guy in 2013 (who was eventually replaced by the more well-known Arul Kanda in 2015).

And it’s reported that when he was interviewed by the Public Accounts Committee (a committee set up by the gomen to investigate 1MDB), they found out that he actually defied orders from 1MDB board of directors, but it wasn’t specified on what.

But what’s more interesting is what we found on Casey Tang and Jasmine Loo because the first thing to pop up was that the 2 of them are WANTED by Bank Negara!

Little else is known about Casey Tang, but as for Jasmine Loo, her name has appeared a bit more often. She’s mentioned with other side characters here, and here (which we’ll also talk about), but probably the most interesting is when Sarawak Report mentions her to be rubbing shoulders with celebs just like Jho Low. But what’s even more interesting is that some have said that these 3 are actually mentioned in the DoJ document. Not by name, but by code:

Yea, not very creative names la, but the term 1MDB Officer is mentioned a combined 83 times in the DoJ document (1MDB Officer 1 is actually mentioned more times than Malaysian Official 1!). They are involved in multiple things like arranging business deals, being present at important meetings, and 1MDB Officer 3 even allegedly received UDS 5 million. (Although that is extremely minuscule when compared to what Jho Low had received.) 1MDB Officers 1 & 2 are also mentioned to have given false information to the 1MDB board about where USD 700 million had gone (which is alleged to have ended up in a company belonging to Jho Low).

But regardless of whether it’s actually them or not, where are they right now? Well, Shahrol is currently working with PEMANDU (a gomen organisation), but we couldn’t pinpoint where the other 2 were.

Jho Low was born into a very rich family. The WSJ estimates his family fortune to be USD 1.75 billion. And it seems that money-making runs in the family because it’s alleged that his father, brother, and sister, were all involved somewhat in the whole 1MDB saga.

Jho Low’s brother, Low Taek Szen, or Szen Low, is actually a high ranking fella in one of his companies. And so it’s not surprising that his name is mentioned the most in the DoJ among Jho Low’s family. He is alleged to have been involved in some of Jho Low’s real estate deals, while also receiving a one-off USD 12,500,000.

As for the rest of his family, Jho Low allegedly transferred UDS 3,500,000 to his sister, but her involvement stops there. On the other hand their father isn’t mentioned to be involved personally, but his bank accounts are. Jho Low allegedly used a few of them as places to store money before moving them to other accounts.

But while his family has been involved, it seems Jho Low trusted one friend more than all of them. Eric Tan Kim Loong was mentioned as one of the main characters by the DoJ. His biggest alleged involvement was probably in helping Jho Low buy many expensive art pieces, and by our calculations, received a possible total of USD 15 million for his work. If you didn’t already know, 1MDB wasn’t just the subject of investigation in the US, but other countries like Switzerland and Singapore as well. In fact, prior to the DoJ becoming big news, 1MDB investigations seem to have caused a 143-year old Swiss bank called BSI to close down. And at the center of them are a few Singaporean bankers. 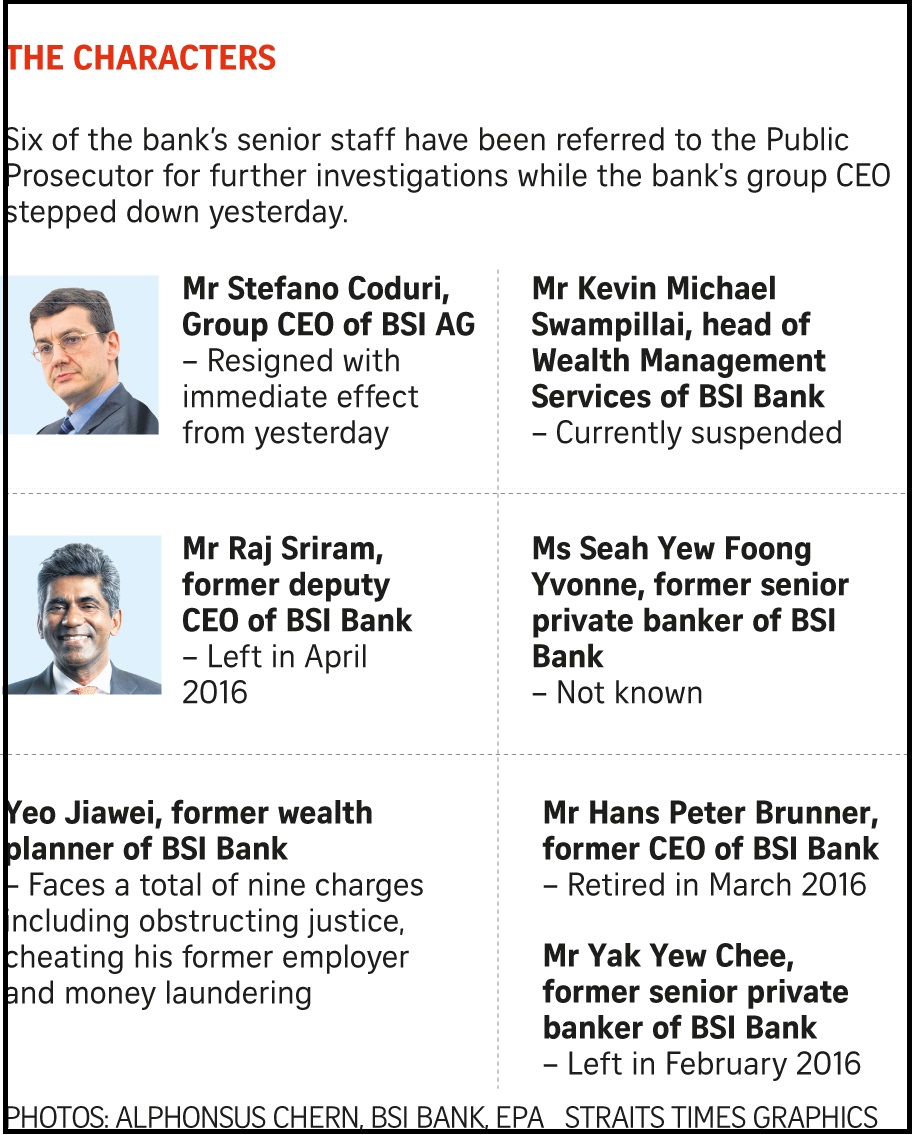 While none of the names above are actually mentioned in the DoJ, BSI is mentioned 82 times, with many of the characters of 1MDB actually owning accounts in it. These accounts were part of a huge chain of bank accounts which were used to transfer money here and there.

NAH, BACA:
And then we asked 30 Singaporeans what they thought about Malaysia...

But among all the employees, the name Yak Yew Chee is probably the most prominent.  He is said to have been the person who managed 1MDB’s accounts at BSI Mr Yak and reported to have earned USD 20 million between 2011-2015. Sarawak Report also claims that he helped manage Jho Low’s payments of buying jewelry for our PM’s wife.

Because of all this, both Singapore and Switzerland actually ordered BSI to close down in their respective countries, and many of these bankers are actually being investigated by their gomen. Also mentioned in the DoJ report are 2 people from the UAE whose names are both mentioned more times than Malaysian Official 1 in the DoJ doc. They are:

But why suddenly got Middle Eastern people involved with 1MDB?? Well, it’s because they are alleged to have played a big role in making UDS 3.5 billion disappear from 1MDB. Basically, 1MDB borrowed money from an investment company called IPIC (which is owned by the gomen of UAE). Strangely, they didn’t borrow the money for long. The DoJ claimed that the money was “almost immediately” transferred to Aabar-BVI.

Now here’s where things get a little complex. Aabar-BVI is alleged to have been named that way to make it look very similar to a subsidiary company of IPIC called Aabar Investments. So when IPIC came back calling for 1MDB to repay the money, 1MDB said the money had already been transferred to Aabar.

But WHICH ONE?!?!?!? The problem was that there were 2 Aabars, and 1MDB had given the money to the one that IPIC didn’t actually OWN!?

And how were the two guys mentioned above involved? Well, Mr Qubaisi held high positions in both IPIC and Aabar Investments, while Mr Husseiny was CEO of Aabar Investments. And both of them were directors in the impostor Aabar-BVI.

What happened to the USD 3.5 billion in the “fake” Aabar? Well….

And based on our calculations, Mr Qubaisi and Mr Husseiny are alleged to have gained USD 493,750,000, and USD 66,600,000 respectively from this whole thing. But at the very least, the latest news on them is that their assets had been frozen by the UAE gomen  (after they had both resigned from their positions in 2015).There have also been reports that they had been arrested, but we were unable to confirm the source.

When managing money, sometimes you need a professional to help you manage all the really intricate details. And in regards to 1MDB, it seems that that person is none other than the husband of socialite Kimora Lee Simmons, Tim Leissner. If the name Kimora sounds familiar, it’s because she was the star of this pretty popular reality TV show a few years back. Image from brigittaromanov.com

Tim Leissner worked for Goldman Sachs, a huge American bank that specialises in a lot investment banking related stuff, and used to be its Southeast Asian Chairman. He was no stranger to Malaysia before 1MDB as Bloomberg reports he worked with rich Malaysians like Syed Mokhtar Al-Bukhary and Ananda Krishnan from as early as 2006.

The DoJ doesn’t mention Tim Leissner, but it does mention Goldman Sachs (or Goldman) 50 times. As for their role in 1MDB, remember the deals between 1MDB and impostor Aabar-BVI? Well, Goldman Sachs was the one who made it all possible (plus other deals as well).

And apparently Tim Leissner and his wife, Kimora Lee Simmons struck quite a bond with our PM and his wife because in 2013 they were guests at the launch of Khazanah Nasional’s (one of our other sovereign wealth funds) office in San Francisco. But just like the two guys from the UAE, Tim Leissner also no longer works for Goldman-Sachs. He stepped down early this year, and was being investigated by the US gomen about the same time.

1MDB involves A LOT of people, but only a few get the limelight.

To be honest, we didn’t cover everyone whose names have been linked with 1MDB because we don’t know enough to write about them. Like this alleged picture on Sarawak Report between Jho Low, our PM’s family, and some officials from another company called PetroSaudi.

And it’s probably because the 1MDB story is so big, with so much to cover that we’ll probably be talking about it for a long time. The Guardian even actually refers to 1MDB as the world’s biggest financial scandal!

And perhaps it’s easier for human mind to have one or two grand villains (probably why Suicide Squad reviews so bad), but when it comes to a scandal this big, mebe Pokemon Go is a better analogy 😉