Hari Merdeka is just around the corner and that would mean countless of articles about the preparations of Hari Kemerdekaan, what happened during the proclamation of independence or the events that led to it. And these are the things you’ve probably heard of before.

So what if we tell you that Malaya could have gotten her independence almost a decade earlier? And it’s not just once but apparently… TWICE??!!

Well, it all started waaaaaayyy back during the Japanese occupation when…

Japan was asked to support the proclamation of Malaya’s independence 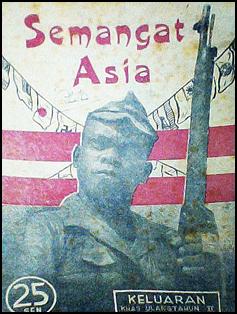 The poster for ‘Semangat Asia’. Img from Doc Player

But the main question is: did the Japanese actually have plans to give or support these territories’ independence?

Well, sorta… depending on which country we’re talking about (we’ll get to this in a bit). But a guy named Ibrahim Yaacob, who founded the Young Malay Unions (KMM), wasn’t buying into the propaganda. When the Japanese started occupying colonised Southeast Asia territories (including Malaya), there have been several groups like the Indian Independence League and Acehnese Independence Group that were working together with Japanese for their own interests. Seeing how these groups were working together with Japanese, Ibrahim Yaacob thought the Malays should do something to safeguard their interests as well.

And one of those was Malaya’s independence. He had been discussing about those interests with the Japanese since 1940.

“In this situation, the KMM leadership took courage and did not fear death, but endeavored to sacrifice their lives, by joining the world of intrigues and espionage in order to secure concessions which would give the Malays ‘a bargaining position’ to safeguard their rights and open a path which would lead to the achievement of Malay independence.” – Ibrahim, an excerpt from The Japanese Occupation of Malaya 1941-45: Ibrahim Yaacob and the Struggle for Indonesia Raya.

KMM made its first attempt to request for Malaya’s independence when the Japanese entered Kuala Lumpur in January 1942. KMM’s vice-president, Mustapha Hussain asked Major Fujiwara Iwaichi and his other officers for Japan’s support to proclaim Malaya independence, because Japan promised to liberate Malaya from British rule. Mustapha Hussain, the person behind the Malaya Independent Constitution. Img from SembangKuala

In fact, they said that KMM’s request for a republic for the Malays was out of question because the sultans were still around and it was Japan’s policy to back the sultans. So, KMM had to say sayonara to its first ever plan to fight for Malaya’s independence.

Thanks to this incident, Mustapha ended up having trust issues with the Japanese. But that didn’t stop KMM from continuing its fight for Malaya’s independence because, a few years after the first attempt…

Ibrahim tried to achieve independence (again) by forming another group

Earlier we mentioned that the Japanese sorta had plans to liberate some Southeast Asia territories and this may be true considering how they were pretty supportive of the idea of the independence of Burma in 1943 and, apparently, the Philippines.

However, they pretty much singled out Malaya from this. And, according to the Japanese officers, that was because the Malays were not prepared to fight for independence.

“What would others say if Malays gained independence without a struggle?” – An excerpt from The Memoirs of Mustapha Hussain: Malay Nationalism Before UMNO.

But the Japanese started to change their minds when they began accelerating their plans for Indonesian independence in May 1945 (you can watch a video of this plan below). And all of this was sparked by an officer specialising in Malay affairs, Yoichi Itagaki at a conference for secretary-generals in Singapore.

See, Itagaki had personally instructed Ibrahim to convene an urgent meeting with KMM. The purpose of the meeting was to bring back the idea of independence for Malaya.

“What I have to say tonight is unofficial, but I think the independence of Malaya is coming. To be ready for this, you should all start making preparations.” – Itagaki, as quoted from The Japanese Occupation of Malaya 1941-45: Ibrahim Yaacob and the Struggle for Indonesia Raya.

Although this was what Ibrahim and the KMM peeps had been wanting to hear for so long, Ibrahim said he could not to proceed with the plan unless Mustapha agrees to it. This was when Ibrahim formed the Special Strength of the People which was subsequently known as the Union of Peninsula Indonesia (KRIS).

NAH, BACA:
What if Charlie Hebdo happened in Malaysia? We explore 3 scenarios

Itagaki and Ibrahim then visited Mustapha to convince him to rejoin the movement but Mustapha refused to believe in any promises made by the Japanese officers. So, they arranged another meeting, this time with General Umezu, who eventually managed to convince Mustapha to join KRIS. Afterwards, Ibrahim began setting up KRIS branches throughout Malaya. Itagaki (far right) with Ibrahim (second from right) and Sukarno (third from right). Img from The Japanese Occupation of Malaya 1941-45: Ibrahim Yaacob and the Struggle for Indonesia Raya

At the same time, the Japanese had formed Hodosho – the help-and-guide people office for ALL communities– to win the hearts and minds of local people in Malaya, especially the Malays and Chinese. Some of these Hodosho officers were said to have helped Ibrahim and KRIS in proclaiming Malaya’s independence.

In July 1945, the Japanese held a meeting to accelerate the independence of Indonesia. In the meeting, Ibrahim was suggested to hold an all-Malaya Pemuda conference on 17th and 18th August to declare their support for Indonesia’s independence.

While making preparations for this conference, Ibrahim had secretly planned to form an interim govt in Malaya to coincide Indonesian independence. Some of the people included in the interim cabinet were sultans of Perak, Pahang and Johor, and aristocrats like Datuk Onn Jaafar. He also planned to send an eight-man delegation to attend Indonesia’s independence ceremony.

Meanwhile Mustapha and Dr Burhanuddin Al Helmy, who would later form and lead PAS, worked on writing the Malay Independent Constitution and other materials related to KRIS. This was done at St George’s Institution in Taiping, Perak.

An Indonesian delegation led by Soekarno and Mohd Hatta visited Taiping and met KRIS members. This was when Ibrahim had suggested for the Malayan independence to be proclaimed either on the same date or after the Indonesian proclamation. Soekarno and Hatta. Img from End of Empire

“Let us create one motherland for those of Indonesian ethnic stock.” – Soekarno, as quoted from The Japanese Occupation of Malaya 1941-45: Ibrahim Yaacob and the Struggle for Indonesia Raya.

While Ibrahim’s plan was to integrate Malaya with Indonesia and form Indonesia Raya, Mustapha claimed that KRIS’ objective was to form a union where each state would have its own separate decision-making bodies. However…

Indonesia proclaimed its independence WITHOUT Malaya :/

Well, as it turns out, all the hard work of KRIS and its members didn’t quite pay off. On 15th August when Japan eventually surrendered after the bombing of Hiroshima and Nagasaki, the Japanese could no longer help the movement and its aspirations. Ibrahim then called out an emergency meeting with KRIS due to this to discuss whether to pursue Malayan independence within Indonesia Raya, among several other stuff.

On the night of 17th August, KRIS held another meeting along with Itagaki and his colleagues. In this meeting, Itagaki apologised for not being able to help Malaya achieve its independence.

“But I am sorry that that scheme has been totally disrupted by the Japanese surrender… Malayan Independence is now your problem. You are now on your own.” – Itagaki, as quoted from The Japanese Occupation of Malaya 1941-45: Ibrahim Yaacob and the Struggle for Indonesia Raya. Soekarno during the proclamation of Indonesian Independence. Img from Frans Mendur via Wikipedia

See, the reason Indonesia didn’t proceed with the whole Indonesia Raya plan was because it wasn’t convenient for Malaya and Indonesia to fight both British and Dutch at the same time. Soekarno had then suggested for Malaya to join the struggle in Java to achieve the aspirations of Indonesia Raya. But that, too, didn’t happen.

This failure was a tragic event for the people in KRIS, especially Mustapha.

“I cried when I heard that the Japanese had surrendered on 15 August simply because there were only 48 hours separating us from the declaration of independence for Malaya. This was indeed a tragic case of ‘so near, yet so far’. I regretted the matter deeply as Malaya would once again be colonised and gripped by a Western power. Even tears of blood could not rectify the situation. That was one of the most bitter moments of my life.” – An excerpt from The Memoirs of Mustapha Hussain: Malay Nationalism Before UMNO.

So, with that being said, we’d like to wish y’all Selamat Hari Kemerdekaan!

If you enjoyed this story and want more, consider subscribing to our HARI INI DALAM SEJARAH Facebook group  🙂