The news has been abuzz lately with a forex (foreign exchange market) investment company based in Penang. The company has around 400,000 investors/members, and they have all not received their promised dividends recently. Worse still, they were all denied access when they tried to log into their accounts on the website. Even when they tried going to the offices, they could not get answers because the offices were CLOSED!!!

Naturally, this prompted a little bit of mass hysteria among the investors, and now we can’t stop stumbling upon news of this… JJPTR and its investors. So, what’s up with this company that nobody gave two hoots about till now?

Ever notice how those shady links like to scream their titles? Sorry, we couldn’t resist. Anyway, the company is called JJ Poor to Rich (JJPTR), and it’s founder is Johnson Lee, who probably likes words beginning with “J” a lot.

“JJ” actually means “to rescue“, and comes from its Chinese name jie jiu pu tong ren, which ironically translates to “salvation for the common people“. You know la, Chinese people like poetic sounding stuff (like House of Flying Daggers). With just US$50 (RM215), you could MAKE YOUR MONEY WORK FOR YOU. HERE’S HOW: Making a measly 10% per annum with EPF? Only 13% per annum with one of Malaysia’s best performing funds? JJPTR promises 20% return monthly, so that translates into 240% of return a year!!! And that’s not including the commission you’ll receive if you bring more people on board. Tell your aunties, uncles, neighbours, and teacher’s son-in-law!

Some people are quick to jump to the conclusion that JJPTR is just another scam, just one among the many other Ponzi schemes that were also exposed in a few weeks. But how can anyone say for sure? Maybe Mr. Lee does have a team of experts generating that impressive amount of profit. Maybe it’s a bunch of time-travelling finance gnomes. But, maybe they should have gotten some IT training, then perhaps they could have stopped the tragedy that caused all the hoo-haa.

Then the company lost RM500 million in 2 minutes because of a hater???

Founder Johnson Lee was quiet about the incident after the initial panic (we talked about in the intro). A few days later, Johnson broke the silence with this Youtube video explaining why people weren’t getting their money.

According to the video, someone hacked into the company’s trading account, and did some forex trading using the account. In the end, the intruder caused around US$400 million (RM1.75 billion) worth of LOSS in just TWO MINUTES, leaving JJPTR’s account with only US$12,000 (RM51,600) left. The consensus here is that the investors might lose up to RM500 million, but Johnson placed the figure at around US$400 million (RM1.75 billion). Johnson further claims that it was someone who was jealous of JJPTR’s success, citing the media and other trading companies in his video description.

But fear not, JJPTR investors. Your founder Johnson has not deserted you in this hour of hardship.

“I will make a comeback, no failure, how to deal with failure is the key! Ask myself how lazy? I dont spell it?” – Johnson Lee’s statement on JJPTR Facebook page

We’d like to take this opportunity to tell you that Johnson Lee studied in USA after secondary school (which is probably where he discovered the existence of Google Translate). Anyway, Johnson has assured his investors that he will come up with a “a better plan” and that the investors will be getting their money back.

Amid allegations that he’s even fled the country, he bravely recorded a video of himself in view of the Penang Komtar tower to assure investors that he’s still working on a solution in Malaysia. Johnson also asked investors not to make police reports, as that would complicate his “JJ” efforts further.

But Behold!! Johnson delivered, just as he promised

On 4th May 2017, JJPTR announced their new plan to the investors. According to this PDF they released, JJPTR will return ALL0 of the money investors put into their previous schemes… within 5 years. But wait… what’s this residual income? Turns out, on top of the promised return, JJPTR is launching a new scheme, but this time with 35% return!!! The MAT-MATIK in the PDF was waaaaaaayyyyy beyond the grasp of our understanding. We would approach one of their offices to inquire more, but we decided that more worth it if we hunted for some finance gnomes instead.

NAH, BACA:
This 3-year-old Malaysian toddler has to pay income taxes?! Is that even legal?

But anyway, we guess it certainly paid off for the patient and loyal JJ investors. Still not convinced? Read the testimony from their satisfied customers !!1!

“I feel he is sincere in solving our problem. We must give him some time to solve the problem as the US$400mil (RM1.75bil) loss is a huge amount.” – Another lady told The Star

“I’m lucky that I invested my life savings.” – An investor told The Star

But wait… how would I know if I’m caught in an investment scam??? Ministry of Domestic Trade, Co-operatives and Consumerism says that they’ve never ever issued license to companies and individuals in forex trading, so that’s a start. A simple way is to check the list of unauthorised companies and websites with Bank Negara Malaysia. Also, here are some tips (simplified) to detect illegal schemes, courtesy of Bank Negara:

If that’s still too confusing for you, just follow Bank Negara’s golden rule: “If it sounds too good to be true, it’s probably a lie“. There is a difference between a Ponzi scheme and a pyramid scheme. Pyramid schemes make “investors” earn money by recruiting more members. In Ponzi schemes, “investors” are tricked into believing that they are earning returns for their money. So you could say these scams out there are a mix of both.

What’s clear is, eventually, the scheme will collapse when they run out of “new investors” to recruit, or when a police investigation shuts down the operation, and that is why these schemes typically collapse in a few years. Oh, and as if we need to mention, JJPTR is not registered with Bank Negara, it’s listed on the watchlist of at least 3 countries, AND it hasn’t disclosed any financial statement to the gomen since it was formed.

Back in 2011, a gold investment company Genneva Gold was shut down after investigations by Bank Negara and the police found evidence of illegal activities. Fast forward 5 years, victims of that company are still waiting and hoping for their money to be returned. In that case, the investigation only started after Bank Negara received complaints, which you can do here. 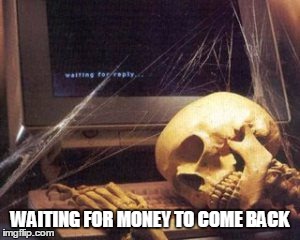 Much like this article, we can only hold on to our suspicion and constantly urge the public to be careful when dealing with these kinda schemes. The thing is, while they are suspected of illegal activity, it isn’t actually investigated or proven (yet). Take JJPTR for example, even after 1 week since the story exploded, only 1 police report was made against JJPTR.

Even with Bank Negara, they do not have power over these “forex trading companies” that are registered and based outside of Malaysia. Summore hor, having a financial services licence overseas doesn’t mean that they’re registered as a forex broker, a corporate lawyer told The Star. The companies can even set up their own servers, making up their own numbers to trick and lure investors. As told to this writer by an undisclosed source (for obvious reasons), the schemes are so systematic that the masterminds behind them can usually just start a new one once they have abandoned the previous scheme.

“The ones that enter the game early will benefit la, usually their close friends. Then the ones that come in later usually become the victims lorh.” – shady friend told this writer

The lack of police reports and complaints to the authorities, and the willingness of investors to continue giving money to unlicensed schemes really tells us a lot about why we keep seeing these schemes in Malaysia. Until people start exposing these companies to the authorities, money game schemes will be here to stay. For now, investigations on JJPTR are already on-going, and people are starting to doubt JJPTR. It’s not really an impressive reaction, but it’s a good start.