How would you feel if for whatever reason, you’re sentenced to spend some time in prison? Based on our previous articles, jail time can either be okay, bad, or horrendously ghastly, so people might have some reservations about being put in one. But did you know that there are some ways to do prison time (or part of it) outside an actual prison?

Sadly, not this one. Gif from Gfycat.

Malaysia is currently exploring alternatives to prison, partly because our prisons are woefully overcrowded. A prison in Kelantan built to hold 1,500 prisoners held 2,998 of them, and another in Sabah built to hold 1,000 held 3,000 at one time. While these may be among the most congested prisons in Malaysia, overall we’re having way more prisoners than before, from 34,000 in 2010 to 67,000 as of last month.

So what is the government doing to address this? Well, there are already several measures in place, and today we’ll be looking at some of them. Starting with the option of… This one is called the Compulsory Attendance Order (aka the Perintah Kehadiran Wajib, PKW), but it’s only available if the prison sentence is three months or less. As for what kind of offences gets you less than three months’ jail, well… we didn’t really comb through all the laws, but in 2015 a postman got himself into PKW for ruining 310 letters during his run.

The year before, rapper Namewee got himself three months of PKW for trying to shame a TNB worker under Sec 509 of the Penal Code. And a wedding planner called Kiki got PKW as well, for damaging a man’s car with a steering lock. According to Abdul Aziz Mohamad, Director of Parole and Community Services, it’s for offenders of light crimes, like stealing and illegal racing, or being a mat rempit.

So how does this PKW thing work? Well, as said in the header, you don’t actually go to prison, but on working days you’ll have to go to a parole office, where an officer there will give you a particular task you’ll have to perform for four hours under his/her supervision. But out of that time, you’re practically free to do your day job or just chill at home if you want. When you finish PKW at 8 and have a rempit race at 8.30. Img from NaimNikmat.

As for what kind of jobs you’ll be doing, it varies: cleaning and cooking for an old folks’ home, working at an orphanage, laying out prayer mats at a mosque, helping out at a mosque during Ramadan when breaking fast, sweeping up trash alongside city council workers, or even helping out at hospitals. That last one, according to Abdul Aziz, director of the Prison Department’s Parole and Community Service Department, is especially suitable for mat rempits.

“In hospitals, we will place them at the emergency ward and morgue. This is suitable for mat rempits as it can make them more remorseful while witnessing victims of road crashes and deaths due to illegal racing,” – Abdul Aziz, translated from Utusan Online.

But how successful is it when it comes to reducing prison congestion and saving money? A 2011 report mentioned that in less than a year, 301 offenders were sentenced for PKW, and the savings had been almost RM1 million. A report from last month said that a total of 4,026 offenders have been sentenced to PKW so far, so if we did a bit of calculation, the total savings should be somewhere around RM13-14 million.

The next thing we’ll be looking at is…

Rehab programs where they work outside of prison

So normally, if you are a prisoner who will be released someday, near the end of your sentence you’ll be put through a rehab program in prison to prepare you to go back into society. The Community Rehabilitation Program (CRP) is kind of like that, except the rehab is done outside. This is a relatively new thing, having been started in 2011, but something similar to it had been done in the 1980s called the ‘Sistem Ibrahim‘, where prisoners were put to work at a sugarcane farm in Kedah. A sugarcane farm. Img from phys.org.

Anyways, this program is available for any prisoner sentenced to more than a year in prison, have completed a first round of rehab in prison, and have at least 24 months of their sentence remaining. Any prisoner except the ones on this list, that is.

In case you’ve never heard of the Tahanan Limpah Sultan before, it’s people who have been sentenced to death but cannot be executed, either because they’re too young or insane. These people have an indefinite prison sentence, unless either a Sultan, Governor or the Agong decides to pardon them. So… getting back to the CRP, how it works is that the prisoners will be given a job at a place outside of prison (usually not less than 40 kilometers from it), and according to circumstances they can either stay there or commute to and from prison every day. While a prison officer will still be monitoring them at all times, among the perks they can expect to enjoy are work uniforms, group insurance, a diet approved by the Health Ministry, days off, meeting their families at the workplace, a chance to get paroled (released early), and perhaps importantly, get paid.

As for what kind of work they might be doing, it can be anything that prepares them for a job after release or for them to start a business, like automotive repair, computer skills, poultry and catfish breeding, and basically anything that teaches them a useful skill or another. But since this program is under both the Prison Department and the Malaysian Armed Forces, some prisoners seem to be doing maintenance work in military camps as well.

Currently, there are six community rehab centers in Kedah, Negeri Sembilan, Kelantan, Pahang, Johor and Sabah, and there has been talks for one in Sarawak as well. Despite the number of rehab centers, the program actually saves the government money, as the construction of the six centers (RM30 million) cost far less than a new prison (between RM250-300 million). Reportedly, the government has saved RM1.56 billion through the CRP, but it’s not just the gomen benefitting from it. A success story from the CRP, Azhar now works in the transport service, earning some RM2.4k a month. Img from CAPAM.

As of July 2016, 6,500 people have completed the program, and most of them got jobs or started businesses after release.

“Out of this (6,500), 85 per cent of them are now self-employed based on the skills gained at the centres while 15 percent of them have been employed in various sectors. Throughout the programme, the inmates were given skills training such as agriculture, aquaculture; chicken farming; basic mechanics and computer skills, among others… Their family members are encouraged to visit as frequently as possible, not only during festive seasons.” – General Tan Sri Zulkifeli, Armed Forces Chief General, to NST.

Perhaps because they have jobs or businesses, the number of CRP prisoners who went back to crime (recidivism) had been impressively low, at 0.3%, compared to 9% for the overall prison system.

While these two systems have been pretty successful, there’ll probably be more new initiatives like them in the future, as… 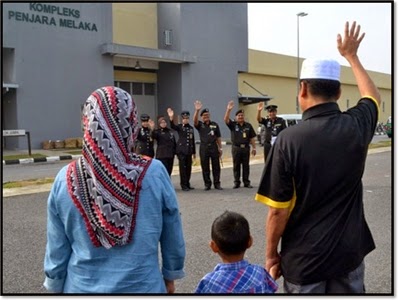 While moving inmates out of the prison is one way to reduce congestion, based on the efforts done by the government, it would seem that they didn’t overlook the second half of the equation: keeping past offenders from returning as well. Judging by reports, their efforts has been a success so far, and according to Home Minister Tan Sri Muhyiddin Yassin, these out-of-prison correctional programs would be expanded in the future, aiming for two-thirds of prisoners to undergo rehab in the community by 2030.

As for how it will be expanded exactly, we don’t know yet, but already there have been some form of expansion already. While the parole system (we’ve written a whole ‘nuther article about it here) had been around for a while, there’s another recently-implemented program under it called the Corporate Smart Internship (CSI), where parolees are given the chance to work at participating private companies. As of last month, there are 44 such companies in 12 states, and since 2016, as many as 2,005 parolees have participated in the program.

Can we actually do it? The numbers highly suggest yes. Muhyiddin mentioned that 39,000 prisoners are currently benefitting from programs outside prison walls, and if you take the 67,000 total prisoner figure from earlier, we’re already more than halfway there. So knowing what you know now… would you hire an ex-prisoner?