Let’s start with some storytelling. Published in 1895, Almayer’s Folly was written during Joseph Conrad’s time as a sea merchant. Image via qwiklit.com

Dutch merchant Kasper Almayer is one of many Europeans who flocked to Malaya during the 19th century. Like those who look for natural resources to exploit and sell, he too has an ambition of his own-  to amass enough wealth and retire comfortably in Holland.

During his stay in Malaya, he ends up marrying a native Malay woman who then bears him a beautiful daughter named Nina. A few years later, Kasper sends Nina off to Singapore following his wishes for her to receive a European upbringing.

After ten years, Nina returns home and soon enough tensions start brewing. Kasper finds out that Dain Maroola, a Malay prince has been meeting his daughter… at the command of Mrs. Almayer! Apparently Mrs. Almayer too has plans for Nina – to marry the prince and remain true to her Malay roots. Eventually, Kasper’s relaxes his harsh attitude towards Dain when he learns the prince may know the location of a secret gold mine. With this in mind, Kasper tries to befriend Dain, in hopes of fulfilling his ambition at last.

Interesting story, huh? Actually, it’s taken from a classic English novel, Almayer’s Folly by Joseph Conrad, which has recently been adapted into a Malaysian film, Hanyut, coming to Malaysian cinemas on November 24th.

It features a diverse cast starring Australian Peter O’Brien as Kasper Almayer, Malaysians Sofia Jane and Diana Danielle as Mrs. Almayer and Nina respectively and also Singaporean Adi Putra as Dian Maroola. It’s also pretty high-budget, as you can tell from the trailer:

But guess what? This movie is actually almost as old as Disney’s Frozen o_O

Not just Frozen… it was also the LAST EPISODE of How I Met Your Mother!

So this movie may be showing for the first time in Malaysian cinemas in a coupla weeks time, but did you know that Hanyut has screened in other countries 2 years ago?

In 2014, an Indonesian film studio got permission to screen Hanyut in 150 theaters across the country. This marked the film’s only major commercial release then, cuz afterwards, it was mostly screened at film festivals in Australia, Indonesia, Singapore, America and Russia but NEVER once in Malaysia!

So, what on earth happened?

Turns out, the director wanted more funding to promote his film first

“I’ve been looking for ways to release the film intelligently. I want to do the film justice, therefore, I need to promote it well.”- Director U-Wei Saari as quoted in Star 2.

Despite being completed on schedule, Hanyut’s original December 2013 release date was delayed, before being put on hold. It seemed that U-Wei was willing to delay the screening for his film just to ensure that it received sufficient promotion among the Malaysian public. To this end, he made a request to FINAS for additional funds, only to have it turned down.

In all fairness to FINAS, former chairman Datuk Afendi Hamdan rejected U-Wei’s request not because he was kiamsap, but simply because it wasn’t an easy amount of money to grant. In fact, back in 2010, FINAS had already granted U-Wei’s production house, Tanah Licin Sdn. Bhd. RM2mil under the Nationhood and Heritage film production fund.

And this was just part of an RM18mil grant from the gomen linked institutions! This included RM 10mil from Bank Simpanan Negara and RM 6mil from the Ministry of Science, Technology and Innovation (MOSTI)!  😯 Having given U-Wei a huge sum of money in the past, even you would understand FINAS’ reluctance to grant him extra funding, especially when there were other filmmakers who needed it as well.

18 million is a whole lot of cash, G! Gif via giphy.com

“We also believe that when you’re (U-Wei Saari) making a film with an RM18mil price tag, you should have set aside funds for marketing. In anything you do, marketing is an important element to ensure your film’s financial success. We would have suggested for them to allocate at least 40% of the film’s production cost for marketing.”- Datuk Afendi Hamdan further explaining his side of the story, as quoted in Star2.

In the end, fortune smiled on U-Wei as he managed to get hold of his earnings from the Indonesian screenings along with some monetary assistance from FINAS early this year. However, there was another problem at hand…

U-Wei also needed to find reliable distributors for his film

In simple terms, a film distributor is an agency responsible for marketing a film to the public and sometimes to decide the release date for films. Occasionally, distributors may even be granted the right to handle DVD/VCD releases of a film.

An agreement between a production house and a distributor is typically based on two types of models: (1) the leasing model and (2) the profit sharing model. In the first model, the distributor agrees to pay a fixed amount for the rights to distribute the film, whereas in the second one, the distributor will get a percentage (ranging from 10 to 50 percent) of the net profits made from the film.

For U-Wei, getting the right distributors was an extremely important task especially when considering Jogho and Kaki Bakar’s (his previous films) failure to perform well at the box office, as he puts it:

“ ‘We spend a lot of time learning how to make films, but I have realized that a film without an audience is incomplete,’ said U-Wei.”-Star2 To U-Wei’s credit, he ACTUALLY succeeded in convincing three distributors- Golden Screen Cinemas, Lotus Five Star and MBO Cinemas– to market Hanyut out to the public. Getting all three on board the marketing effort was indeed an achievement of sorts because this meant that Hanyut could potentially be screened in a total of 84 (33 from GSC, 25 from LFS and 26 from MBO) cinema outlets across Malaysia!

However, there’s still a lingering question that must be answered…

NAH, BACA:
This British officer fell in love with Malay culture... so he stayed back to protect it

RM18mil! Why did U-Wei spend so much money on this film?

As mentioned earlier, Hanyut’s production budget ran up to a grand total of RM18mil, which is even higher than Puteri Gunung Ledang’s budget of RM16.6 mil! This makes Hanyut perhaps the most expensive Malaysian film in history! Yet, Hanyut’s massive budget didn’t go unnoticed as there were several parties (eg: Malaysia arts & culture website, Daily Seni and New Straits Times) who have questioned the necessity for such an expenditure. One possible reason as to why Hanyut needed such a huge production budget was because it had employed over 200 extras and 130 production crew. Moreover, many of them were from countries like Poland, Australia and Indonesia, meaning the production house had to pay them according to their own currency rates. Wow! So many non-Malaysians worked to make Hanyut a reality. Click to view the full IMDb credit list.

“By working with such film crews who have very high standards, local filmmakers – be it the director, producer or local crew – learn an incredible amount from them. Not only that, they will also be able to apply what they learnt to local productions, thus raising the standards of these productions.”- Julia Fraser, Hanyut’s film producer justifying her decision to hire international talent, as quoted in The Star Online.

Speaking of standards, another probable reason for Hanyut’s huge budget can be attributed to the involvement of highly experienced and qualified production staff members. If you were one of them, we bet your butts that you would be asking for a good pay. As the Joker once said:

Julia Fraser for one, served as the producer for Osama, a film which won a Golden Globe Award in 2004. On the other hand, Arkadiusz Tomiak (see if you can pronounce his name correctly) was the director of photography for award winning films such as Your Name is Justine (2005) and The Girl from the Wardrobe (2013).

Interestingly enough, U-Wei hired Arkadiusz because of his Polish nationality. U-Wei reasoned that since the author of Almayer’s Folly’s was of Polish heritage, it was only fair that the cinematographer should be from a similar background.

And how can we forget the soundtrack, the one aspect of filming that many take for granted? For this purpose, U-Wei chose Cezary Skubiszewski (again, try pronouncing his name correctly), a music composer based in Australia, to score Hanyut’s soundtrack. And just like Julia and Arkadiusz, Cezary was definitely no novice in his field as he previously earned accolades for scoring films like Lilian’s Story and The Mystery of a Hansom Cab.

So, what does Hanyut mean to the Malaysian film industry?

The production of films like Hanyut can be seen a sign that Malaysian directors are not afraid of making BIGGER and BETTER films. However, if U-Wei’s hoping for Hanyut to be a box office hit, he’s up for one heck of a challenge. According to Daily Seni, for Hanyut to be considered profitable, it needs to make more than RM36mil! This is after taking into account that only half of the box office sales will go to the filmmakers.

Also, this raises a good question- should directors make films solely for profit or for the sake of creating a memorable piece of art? Unlike the time of P.Ramlee – where films managed to entertain audience through good scripts and acting – the focus of many production houses has now shifted towards making films more action oriented as possible in order to maximise profits. 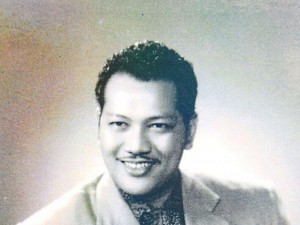 Legendary actor, director and singer P.Ramlee is still seen as the icon of Malay entertainment in countries like Malaysia, Singapore, Brunei and Indonesia. Image via cinema.com.my

You may be surprised to learn that some of the most profitable Malaysian films relied on cliched story tropes- gangsterism, illegal racing, ghost stories etc. -to drive their plots. A good example would be KL Gangster which received modest ratings, yet the film raked in a revenue of RM11.74 million, making it the 6th highest grossing Malaysian movie of all time. Surely, Malaysians are looking for films that can reflect our country’s societal issues in a meaningful manner?

Maybe, just maybe, Hanyut is that one local film we’re waiting for. A film that not only pays attention to its artistic elements (especially its cinematography) but also carries an exciting story line capable of attracting the Malaysian audience.

“You cannot go wrong with a good book. ­Conrad’s not so ­condescending in the way he portrays us (the Malay people and their culture) in his novel. It’s also ­interesting to see a white man (Kasper Almayer) afraid of a ­Malay woman. Conrad ­understands the mystery of a Malay woman.”- U-Wei Saari explaining his decision to adapt Almayer’s Folly, as quoted by The Sun Daily.

Let’s just hope that our local cinemas are willing to give this film a fair screening period, as required by the Wajib Tayang scheme.