Like a Hollywood movie franchise, the 5th edition of the Bersih rally will be gathering in Dataran Merdeka on the 19th – just slightly over year since the previous Bersih was held. However, there seems to be one thing missing from Bersih 5 compared to the previous rallies – Enthusiasm from the public.

Compared to Bersih 4, we noticed that response to Bersih 5 on social media has been somewhat muted since its announcement in mid-September. We didn’t see as many Bersih-based profile pictures, posts about attending, all that stuff. So just to confirm it, we did a callout on CILISOS, SOSCILI, and our personal Facebook and Twitter feeds asking who’s going (or not going) and why.

We got 135 comments (excluding likes) and here’s the breakdown:

Of course, this is only a small sample which may not represent the general consensus yadda yadda; but we do think there’s some significance since most of these responses came via our page callouts, meaning that they can be considered as part of the general population rather than curated Facebook friends. Reasons for going were pretty standard as far as every Bersih rally goes: But we figured the more interesting point to address was why people weren’t or were undecided on going, considering that many of them attended past rallies. Coincidentally enough, Bersih did also did a live Q&A on Facebook with Bersih Chairperson Maria Chin Abdullah and Deputy Chairperson Shahrul Aman which addressed some of these concerns/reasons so we figured we’d add their responses in as well so – yay! more content!

We translated some parts of the video to English (with timestamps provided), but you can watch the full video below because we had to shorten some parts and leave out a lot of issues discussed:

So let’s start with the most stated reason, which is…

1. I still don’t see any change after so many rallies. What’s the point? 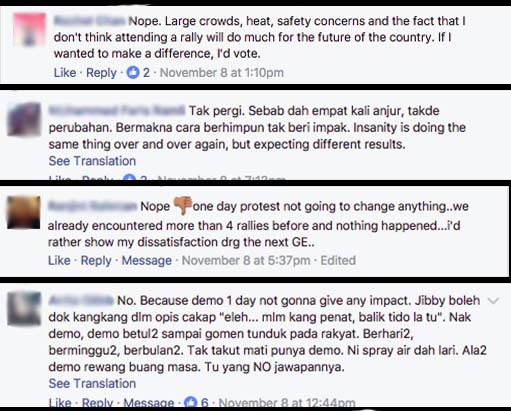 Last year, we wrote an article addressing this same sentiment in which we found that rallies and protests rarely produce immediate results. Rather it works the opposite by providing authorities with a clear indication of public sentiment, raises awareness and discussion, and other effects that you can read about if you click this link.

In the Q&A, both Maria and Shahrul acknowledge that it’s an ongoing process as well:

“I think we are moving step-by-step, but it’s very slow. We are still challenging the Election Commission to reform the election process so we have quite a long way to go still.” – Maria Chin Abdullah, translated from BM by CILISOS (Timestamp – 10:20)

They also pointed out that Bersih has brought certain changes such as the introduction of indelible ink, parliamentary select committees for electoral reform, and general raising of awareness. Also, the objectives of Bersih 5 are a little different from Bersih 4, most notably the one for greater empowerment of Sabah and Sarawak (Around 49:00 of the video).

While our article also mentioned that rallies have a rock concert effect – the excitement, euphoria, and putting differences aside to bond over a common cause to provide encouragement that you’re not alone in your beliefs and/or your struggles – it seems that some protestors have simply tired themselves out…

2. I’m too tired to attend another rally We’ve had a number of protests/rallies since Bersih 4, such as the one in August this year to get MO1 arrested, anti-TPPA in January, and the long-term Occupy Parliament protest by university student groups. With so many protests happening and no immediate progress and change to show for it, some people may have simply become discouraged or would simply prefer to take a step back from the action this time around. So perhaps Bersih 5 is just too much too soon? 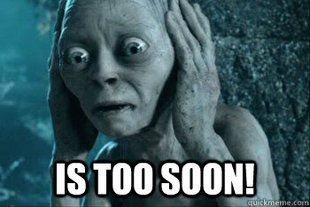 While Bersih didn’t address this directly beyond reasons that change is a slow gradual process (see previous point) and that perseverance (requires Void Stone and Ring of Health) is needed, we can possibly infer that one of the reasons for Bersih 5 is because GE14 may happen earlier than expected:

“I can only say the general election will be held after Hari Raya. But as to which year’s Hari Raya, I don’t know.” – PM Najib, as quoted by Straits Times

It’s been shown that Bersih did actually have an effect on the political scene since it was partially credited with creating higher voter turnout for GE12 and 13, causing BN to lose the 2/3 majority in parliament (click here to read why this is important), and simply creating greater political awareness among Malaysians:

“In the past, Malaysians were known to be apathetic and complacent about elections and national and state politics. However this has changed and it is undeniable that Bersih helped trigger the people’s engagement in politics.” – Khoo Ying Hooi, quoted from New Mandala.

However, the timing of the rally itself may be a bit unfortunate….

Unless you believe in greater conspiracies where unseen government hands conspire to distract people from attending the rally, it might just seem that Bersih 5’s timing simply happened to clash with some other events, like Rockaway Bukit Jalil; And we weren’t even kidding about Pokemon:

We don’t think there’s really anything much to add to this except to gently remind the Bersih gaiz to check event calendars before organizing Bersih 6.

Millennials may not get this joke. Image from ManiacMuslim.

Although only one of our commenters mentioned the “Yahudi” reason  – that Bersih is funded by George Soros and/or the Yahudi to subvert the government and/or Islam – it seems to be spread around enough for Bersih to address it in their Q&A.

NAH, BACA:
How many calories do you burn at Bersih rallies? A fitness trainer calculates!

When asked about it, Shahrul says that accusations of Bersih being a part of Agenda Yahudi is nothing new, and in fact these labels and accusations are recycled prior to every Bersih rally, in addition to new ones like Bersih being infiltrated by Daesh:

“I hope Malaysians can see the series of labels and accusations attached to Bersih, current and previous, because the trend has always been about the same. … The Yahudi issue actually started because of a 2013 report by NST, and NST has apologized in print.” – Shahrul Aman, translated from BM by CILISOS (Timestamp – 35:00) Screencap of Shahrul showing the NST apology. Click to read.

But moreso than Yahudi, what we got more of are questions of Bersih’s political neutrality, and if they’ve lost sight of their original objectives.

As a bit of a backstory, Bersih was originally started with the involvement of Opposition party members, but it was later re-launched as a coalition of NGOs only without political party involvement – hence the confusing Bersih 2.0 name. Bersih Remastered or Bersih² would have been cooler, but maybe that’s just us.

In any case, Shahrul argues that Bersih fights to defend the constitution and systems of government already in place regardless of which party is in charge (15:25 of the video). He also added that Bersih’s entire budget and statement of accounts are available online for anyone who wants to view them to, y’know’ check for wang Yahudi.

5. I’m afraid of the Red Shirts After all the news of clashes between the Red Shirts and Bersih supporters over the past few weeks, there’s been an underlying sense of fear that violence would break out during the rally itself, especially for those with young children or families to support – like, takkan you bring them along, kan?

It would be highly irresponsible for anyone to guarantee that the event is 100% safe, but certain measures have been taken to keep things from going out of hand:

I’m a regular citizen too. I also have a family, and I’m also afraid. Everyone’s afraid but we are going anyway to express our stand and solidarity to ensure a good future for our children and grandchildren. … We hope the police will help us to ensure that Bersih 5 would carry on safely and smoothly. We also got 1,000 people who volunteered to provide additional security detail during the rally.” –  Shahrul Aman, translated from BM by CILISOS (Timestamp – 55:10)

So something like this won’t happen again. Gif made from KiniTV video.

If you’re planning to attend, you might also want to read our article on what you can and cannot LEGALLY do to protect yourself. In case la.

6. I’ll can’t go because I work for gomen / I’ll get kicked out of university 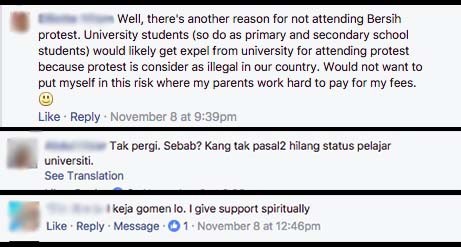 The difference between university students and government workers is that there’s a law preventing students from participating in political activities (which in this case includes rallies). Introduced by then-Education Minister Dr. Mahathir in the 70’s, the amendments to the Universities and University Colleges Act are still enforced on students today despite accusations that it’s being used to stifle dissenting voices against the government or the university.

On the other hand, there aren’t any laws preventing government workers from attending rallies:

“Anyone can support Bersih. If a person is concerned about his job which prevents him from speaking out, then that’s tyranny [“kezaliman”] and shouldn’t be allowed to continue. How can there be a government that suppresses public workers from expressing faults within the system?

We should be able to state and attempt to correct faults, and this is protected by the Constitution under Article 10 for Freedom of Speech and Freedom of Assembly.” –  Shahrul Aman, translated from BM by CILISOS (Timestamp – 52:36)

So these are pretty much the more serious reasons for people to not attend Bersih 5, but before we head to the conclusion let’s look at one more reason that popped up…

We aren’t sure if these commenters were serious or trolling, but since Bersih addressed it in their video we might as well add it in. The answer to this is pretty straightforward though:

We have never opened a counter to give out money to the people because we can’t afford it. – Shahrul Aman, translated from BM by CILISOS (Timestamp – 40:00)

Of course, this doesn’t mean nobody is going for Bersih 5 la

Again, we stress that the focus of this article is on reasons people aren’t attending Bersih 5, so it’s not indicative of the actual turnout come November 19th. Perhaps in some way this might also serve as food for thought for the organizers when Bersih 6 comes about.

It goes without saying that Bersih isn’t perfect, but it would also be unfair to expect them to be. We give them props for listening to feedback and improving where they can – like prioritizing our friends in East Malaysia this time around or even banning vuvuzelas – But sometimes it’s just impossible to live up to everyone’s expectations. For example, some comments have mentioned that a day of protest won’t change much, something that researchers say is true to a certain extent. But then, if Bersih was to have a 5-day rally, how many of us would be wiling to commit to it?

So if you’re going for Bersih this weekend, great. If you’re not, that’s okay too. But if you’re undecided, give it a good think and consider if exercising your constitutional right to let your voice be heard is important enough to make a trip to Dataran Merdeka. After all, as the Americans recently realized, protests are much more effective before an election – not after. 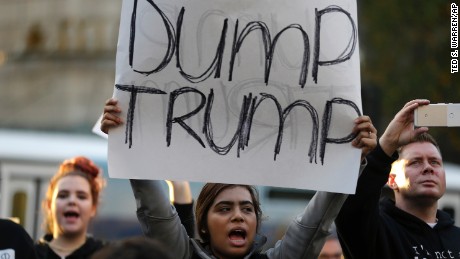