[This article was originally written in July 2016, and updated by UiHua on October 7, 2021. Untuk dalam Bahasa Melayu, sila tekan sini!]

Very recently in her defence trial for corruption charges, Rosmah clapped back against claims that she was an overbearing person by saying the words which became instant headlines for most newspapers covering the trial: Her statement reminded us of this article, which we wrote after realizing we didn’t really know much about her family. The Najib-Rosmah family doesn’t need much introduction, much less is known about about Najib’s step-family – Rosmah’s family with her first husband.

Yep, the PM’s wife was married to another guy named Abdul Aziz Nong Chik before she married Najib in 1987. From that marriage, she has two kids – Riza Aziz and Azrene Soraya Abdul Aziz (Najib’s stepkids). Riza has been ALL OVER the news lately over US investigations into 1MDB, but who is Azrene? It’s not surprising if a person wants to cut ties with their first family if they remarry, but for such high profile people like Najib and Rosmah, doesn’t it seems strange the public don’t know anything about Azrene?

And if that is new info for you, wait till you see the rest of what we found… or did not find

1. We couldn’t find ANYTHING on Rosmah’s first husband OMG is that him??? No, that’s just the Abominable Snowman. Image from TomoNews US on YouTube

So if Azrene and Riza are not the children of Najib and Rosmah, Rosmah had to have married someone else first, right? We tried looking for the identity of this person on Google, funnily though, if you type in ‘Rosmah Mansor first husband’, Najib’s profile is the first thing that pops up. What we found were a lot of blog links identifying this mysterious man as Abdul Aziz Nong Chik, but only one news site, Sinar Harian, named him.

So we tried Googling ‘Abdul Aziz Nong Chik’, still not much luck. He’s even more difficult to find than the Abominable Snowman! Apparently we weren’t the only ones having trouble finding this guy:

“…an initial search of the history of her first marriage and former husband drew naught from Google. Hence, any recorded history and persona of Rosmah only existed after marrying Najib.” – malaysiansmustknowthetruth.blogspot.my

THENNN we tried to Google old photos of Rosmah to see if Abdul Aziz Nong Chik was in any of them. Unfortunately that one also takda. However, here are some really nice photos of her younger days:

We don’t know if this mysterious first husband is still alive or not. Or if such a guy really exists. Will the real Abdul Aziz Nong Chik please stand up? The search continuessss….

2. His step-daughter had one outburst on FB…then things went back to ‘normal’

It’s long, but worth reading to get a glimpse of Azrene herself and what’s been going on in the family. Click to enlarge

If you’ve been following the media storm around Riza Aziz (Najib’s step-son) you might have come across a few articles on his sister. After never having heard of ‘Azrene Aziz’ before, the public suddenly got a glimpse into the life of the step-daughter of the Malaysian PM and their family drama. She wrote a super long, heartfelt post about it on 21st July 2016, on her Facebook, Twitter and Instagram (where she goes by the name Azrene Ahmad).

TLDR: Azrene starts her official statement saying Riza will end up “paying the price” for being the “dutiful son” now that the US has started investigating 1MDB. Perhaps the most poignant part (to us) is when she tells her mother (Rosmah) “you have forsaken one child at great cost and detriment”, and “please do not forsake another just so that you and your husband can get off scot-free”. The conclusion we drew from her post is that she loves her family still, but she did not want to make the same life choices as them.

A spokesman for the PM said he cannot comment on their private family matters, but that Azrene had a right to say what she wants to say. Meanwhile, Rosmah’s aide, Rizal Mansor had this to say on his Facebook post:

“I asked the mother… not a word was uttered. Soon after, I could see tears well in her eyes. What can I conclude? There was never a moment when the mother thought of speaking ill of the daughter.” – Rizal Mansor, reported on Malaysiakini 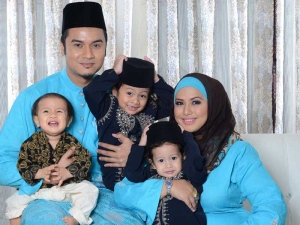 Azrene with her husband and three sons. Image from Sinar Harian

Here is some background we could find about Azrene… she appears to have been estranged from her family for 10 years and calls herself the “black sheep of the family”. Riza on the other hand is the “dutiful son” based on her post. Something to note, her mother and step-dad didn’t seem to have attended her wedding (didn’t see them in their wedding photos).

Azrene also seems to have a normal, happy life with her family. She’s married to Fazley Yaakob, a celebrity, and they have three cute sons. She works as an image consultant at IMAGO Consultancy and also she’s the Head Cake Artist at Suka Sucre Bistro. Speaking of cakes…

After Azrene’s outburst on 21 July, things seemed to go back to ‘normal’, at least on her social media accounts. She posted some stuff about cakes… Her posts AFTER 21 July on Facebook (top left), Twitter (right) and Insta (bottom) were all back to ‘normal’.

3. Najib’s step-son-in-law is not who he claims to be 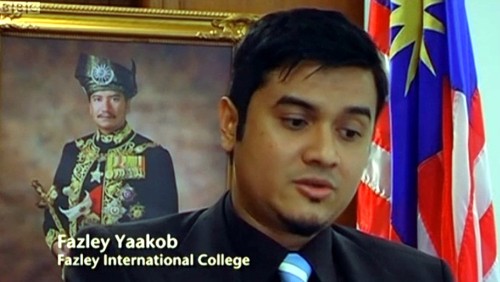 Fazley Yaakob is Azrene’s husband, which makes him Najib’s step-son-in-law. While we know him to be the winner of the MasterChef Celebrity Malaysia, plus he’s a celeb with several hit songs, many may not know that he claimed to be something he is not. He was at one time the Director of the Fazley International College (FIC) in KL, offering University of Wales degree courses, according to BBC.

But he had a FAKE Masters and PhD in Business Administration! He claimed the qualifications came from the European Business School (Cambridge), an offshoot of the Irish International University, which was exposed as a sham by the BBC in 2008. 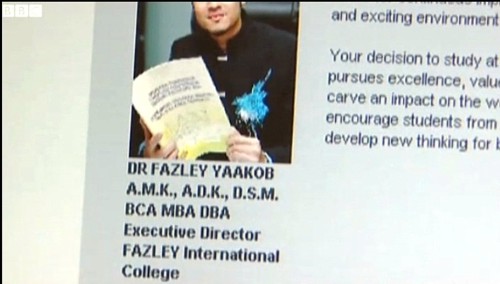 Fazley explained that the Welsh Uni did not even question his credentials, which were displayed on FIC’s website – until he was confronted by BBC’s education correspondent Ciaran Jenkins.

After it became public, he resigned in 2010. He explained that his role in FIC was more of an investor and he’s never been part of the academic team or sat in at academic meetings. However, because of the controversy and the bad image it would bring to the college, he couldn’t accept it, so he did the honourable thing by resigning.

4. Her Wikipedia page was BLOCKED after numerous “edits” These days, the Wikipedia page for Rosmah appears just like any other on the world’s largest encyclopedia. But for a time in 2016, users who wanted to know more about our First Lady were met with a copyright issue notice.

Thankfully, Wikipedia is a genius website with a revisions history for its pages, so we dug through that. The two newest revisions led to the same ‘potential copyright issue’ page, so we assume that’s where the problem started. A side note states that it was closely paraphrased from this site.

But the third newest (back then), by Afandri Adya led us to a pretty normal looking page about the PM’s wife. The earliest page we could find was created on 16 Nov 2010. There was less information about her back then, so the page is short.

We looked through more revisions and found that some were edited with some *ahem* kurang ajar things, which we can’t even quote here (we wouldn’t even repeat it to our parents). Although to be honest, many public figures in Malaysia punya Wiki pages also kena quite regularly. We’ll give you one of the safer revisions which linked Rosmah to a “local online cosmetics and intimasi company” (WTH?!).

5. Najib’s in-law is also in a vicious feud with his wife Rosmanuddin Mansor (claiming to be Rosmah’s step-brother) made a video about her. It wasn’t very nice.

It seems Azrene is not the only family member Rosmah ostracised. In 2009, a guy claiming to be Rosmanuddin Mansor, Rosmah’s ‘step-brother’, released a series of videos on YouTube titled ‘Rosmah Perempuan Puaka’ (puaka means ghost or malicious spirit in BM). WHOAAA!!!

The five-part video has interviews of Rosmanuddin and a bunch of other people who claim to know the PM’s wife from her childhood in Seremban, Negeri Sembilan. They allege that she refused to acknowledge them after becoming somebody important. On top of that, they claim that she dabbles in black magic. Datin Che Mah claims to be Rosmah’s neighbour when she lived in Negeri Sembilan. BTW, anyone notice the uploader’s name is C4 Productions?

These sound like very tall (and dangerous) allegations. Is this video even for real?!? We tried looking for other sources to confirm its authenticity. But we couldn’t find much from news, though a lot of blogs talked about it. However, we did find the The Star reporting Rosmah’s response to it. So did Malaysiakini here and here.

But our best bet was this article written by Zakiah Koya on Malaysiakini – though at the time she was working at The Sun. (Zakiah is the elder sister of Latheefa Koya, a lawyer who handles Anwar Ibrahim’s cases.) Naturally, Zakiah asked her about the ‘puaka’ videos…here is a portion of Rosmah’s answer:

“I don’t think I have lost my cool, I just don’t entertain them. You have to know how to close up. If you keep on entertaining; they have a lot of fun asking all kinds of things. I don’t think I have time to entertain. […]” – Rosmah, reported on Malaysiakini (click the link for her full answer)

What we noticed about her answer is that Rosmah DOES NOT DENY Rosmanuddin was her step-brother. You would think if he’s a fake, she would have called him out immediately, right? Then we found this blog claiming to have copied an exclusive interview of the PM’s wife by a news portal called Malaysian Instinct. But note that we couldn’t find the original Malaysian Instinct article, so we cannot verify if this source is credible.

“Yes, Rosmanuddin is my brother. I have not seen the video, and am disappointed that these baseless accusations have been hurled to me. […]” – allegedly Rosmah’s quote on barkingmagpie.blogspot.my

Additionally, there’s one shot in the ‘puaka’ video (3.59 onwards) where Rosmanuddin shows his IC, presumably to prove his identity. It’s a bit blurry, but the blog has a clearer image, so we used that:

Well, so far Rosmanuddin appears to be who he claims he is. Then again, nothing is ever what it appears to be, in Malaysian politics. (Like one time, this guy claiming to be NGO guy planned to expose Dr. Mahathir’s millions. Turns out he was an impostor trolling Malaysian media.)

Why is Najib’s step-family so….mysterious? 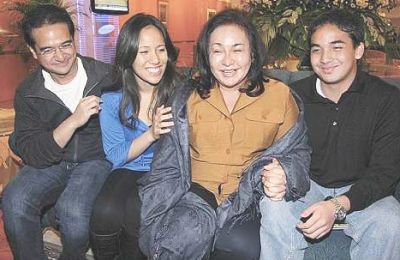 Right now, it seems like only Riza hangs out with Najib and Rosmah’s current family. Image from steadyaku-steadyaku-husseinhamid.blogspot.my

So… have you noticed something weird with this article?

Who knew the PM’s wife had a step-brother? In fact, who knows anything about her history at all? Even others who wanted to research into her family couldn’t find any trace of her ex-husband. Most people probably didn’t even know Rosmah had another daughter called Azrene until she made that Facebook post!

Similarly, Najib’s first wife Puteri Zainah Eskandar, suffered the same fate as Rosmah’s first husband – that is to disappear from public life, sometimes even unacknowledged by their own family members.

Of course we understand that this all happened before Facebook came out, but considering how much coverage our dear ex-PM and his wife continue to get, it’s strange how little we actually know. 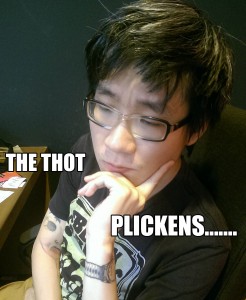 Share this article:
NAH, BACA:
How did Raja Petra Kamarudin turn from Anwar's loyal supporter, to his biggest enemy?