At the stroke of midnight, 30th August 1957, the people of Malaya gathered at the Royal Selangor Club Padang and witnessed the lowering of the Union Jack (name of the British flag, like Jalur Gemilang is our flag’s name). It was the end of British colonisation and the beginning of our independence.

Next morning around 9.30am, the ceremony moved to Merdeka Square, where Tunku Abdul Rahman made his iconic “Merdeka!” shout seven times joined by the crowd. So that was it. We were on our own. No more colonial rules, no more Queen Elizabeth II, no more tea…well, still got tea la… But this time, the tea tastes different – tastes like independence. *patriotic tears* Malayans joining in the Independence Day ceremony. Image from merdekakmp2013.blogspot.my

Woi, gaining our independence was a BATTLE k, you know how much our forefathers sacrificed? But as much as everyone who played a part in it deserves respect, we only know about guys like Tunku Abdul Rahman, Tun H.S. Lee, Tun V.T. Sambanthan, etc. Total testosterone fest! How much do we know about the women tokoh-tokoh who did their part as well? TBH, we couldn’t even name ONE until we looked them up.

So here are four true heroines we must thank, because of them, today we can sing “Tangaaaal, tigahh pulu satuuu”….

1. The communist who was stabbed in the chest by Japanese soldiers…and lived to fight summore! 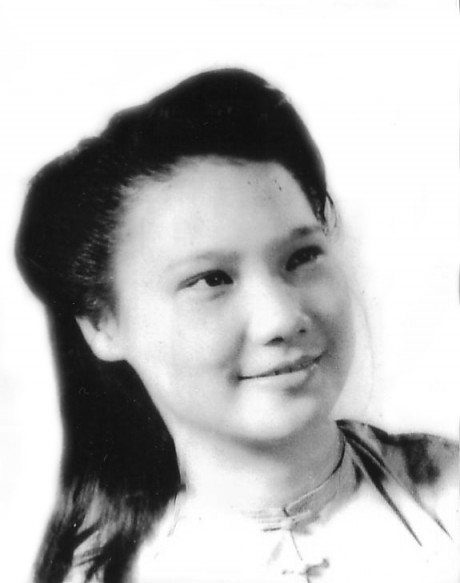 Suriani when she was younger. Image from PSM

Betcha don’t know of this woman called Suriani Abdullah [1924-2013] right? Actually, she was born Eng Ming Ching in Sitiawan, Perak. She attended Nan Hwa High School where she met other communists, including Chin Peng and got politically radicalised. In fact, she was a live-together, die-together BFF of Chin Peng. In 1940 she joined the Communist Party of Malaya and was actively involved in organising women workers.

Suriani was one heck of a woman revolutionary pioneer in the country, earning her the title ‘Serikandi Anti-Jepun’ (Anti-Japanese heroine). She fought against the Japanese invasion from 1941-1945, and then the British for independence from 1948-1957. She had even been captured and tortured for 6-months by the Japanese when she was just 21 years old! 😯

“Courage and determination. When we have courage and determination, and what we fight for is right, we can overcome anything, even as women. Who says I don’t love my family – of course I love them. But I also loved my country and people. So I had to overcome my family’s grip. That’s what I did.” – Suriani on how left the next to fight for Malaya, in an interview on matamin02.blogspot.com

At the time of the Japanese occupation, there were two anti-Japanese student movements – the Kesatuan Melayu Muda (KMM) and Malayan Communist Party (MCP). Suriani joined the MCP Rejimen-10 where she met guys like Rashid Maidin (senior leader of MCP) and Abdullah C.D., whom she later married in 1955.

She had charm, “sex appeal” and “a streak of humour”, even her political opponents could see that. Victor Purcell, the Chinese affairs adviser in the British Military Administration (BMA) wrote in his report:

“She has a quite good figure beneath her dowdy blue cotton dress, but the fountain pen stuck in her bosom is a sharp reminder that she puts business before allurement. Her most remarkable features are her eyes. At one moment they are flat, brown and dull, at the next revealing in baleful flashes the smouldering fires of fanaticism.” – Victor Purcell’s confidential reports in 1945, Malaysiakini Abdullah and Suriani lived in Thailand. Image from matamin02.blogspot.com

What made Suriani so endearing to the people was how she fought for the rights of labourers, lower classes and marginalised people. They all looked to her like a mother coz she always had time to listen to their sighs and complaints.

So finally after the Japanese and British ciao, Suriani still remained in the MCP. In the 90s, she was granted an audience with the Sultan of Perak and in 1999 went to Mecca for Haj. She passed away on 21st March 2013 at the age of 89, in Thailand where she lived with her daughter and husband.

2. The first woman who not scared to bantai ‘cowardly’ UMNO leaders Interestingly, she wasn’t even born in Malaya, but in West Sumatra, Indonesia. Then she crossed the Straits of Malacca in the 40s, so gung-ho to fire up the women in Malaya, after Indonesia ousted the Dutch from their country. It was said that she went all the way to Singapore in 1946 just to collect donations to help Indonesia’s struggle for independence.

According to this Malaysian Digest article, she was shocked to see how women were oppressed here. She was elected the leader of Wanita UMNO (in those days it was called Kaum Ibu), but that put many at unease… Khatijah was very vocal for a woman in those days and she tak takut bantai UMNO leaders whom she saw as cowardly in their fight for independence. Her leadership led to nearly 10,000 women joining the party in the mission for kemerdekaan. Khatijah’s memoirs. According to this blog, you might be able to find a copy in the National Library.

Here’s an excerpt of her speech:

Yep, can you tell how much she loved freedom?

In 1953, she demanded the women’s vote within UMNO’s National Assembly and this pretty much signed her exit la. Eventually she was dismissed in November 1956. Did that stop this passionate woman? Nope! She joined PAS’s woman faction Dewan Muslimat. She did rejoin UMNO in 1972, however no more big roles for her. Aishah Ghani [1923-2013] joined Angkatan Wanita Sedar (AWAS), the women’s wing of Partai Kebangsaan Melayu Malaya (PKMM), a leftist Malay socialist party, the minute it was founded in 1946. There she did her time for them as a journalist in Pelita Malaya, one of PKMM’s five official media outlets (3 daily newspapers and 2 magazines). In that time she saw a little excitement when the party had a rally for independence at the Sultan Sulaiman Club, KL.

Aishah’s experience might not have as insane as Suriani’s…freaking stabbed in the chest…she didn’t actually take up arms as far as research shows, but her fight was not on the physical battlefield. It was more on the political battlefield.

One year after joining AWAS, Aishah quit and joined their enemy party…UMNO. Jeng jeng jenggg! So she joined UMNO Kampung Baru in 1949 and was appointed as Secretary. Then she went to London to study journalism in 1955 and when she came back to Malaysia in 1959, she worked for Berita Harian, as well as the editor in Group Releases New Straits Times.

On 13 Sept 1962, she was appointed as a Senator! Da FIRST woman senator in Malaysia! Aaaand she was appointed the first woman representative to the UN General Assembly. Between 1960 and 1972 she also served as Secretary of State Wanita Umno Selangor. Finally in 1972, Aishah became the Chief of UMNO Wanita, heading it for 12 years until 1984.

Even after the end of her political career, she never stopped fighting for her fellow women, being the Chairperson of the Centre for Protection of Women Darsaadah and Chairperson of the Koperasi Wanita Jaya Murni Berhad. Here’s a video of her and you can see how passionate she was about women’s rights.

4. The guerilla who fought in the Malayan jungles…despite tragically losing her children Shamsiah Fakeh in a family photograph taken in 1964. Image from Wikipedia

Shamsiah Fakeh [1924-2008] has been painted as a villain in history because she is “Melayu Komunis“. Born in a kampung in Negeri Sembilan, she went to an Islamic school in the same state and then was sent to Sumatera to continue her Islamic studies.

From the age of 17, she had been married FIVE TIMES! She was abandoned by one husband, plus both her children by him died in infancy. 😥  While one turned out to be a Japanese informer. 😡  Another she mistakenly thought was killed by the British. Her last marriage was to a Malayan Communist Party member Ibrahim Mohamad, until he died in 2006. Shamsiah Fakeh aged 13 with her mother and brother Ramli. Image from tarbiahdiriku.blogspot.my.

Shamsiah herself was the leader of AWAS (the women’s wing of PKMM as mentioned just now). She was initially talent-scouted by both UMNO and PKMM, but she chose PKMM coz she felt UMNO was a British puppet.

By 1948, PKMM, AWAS and API were all BANNED, so Shamsiah and her comrades hid in the jungle and fought. They retreat, retreat, until sampai the Thai border and eventually she and her husband were sent to China. The couple were kicked out of the party in 1972. With nowhere to go and barred from coming back to Malaysia, they settled down in China.

“The situation started to get tense. We were ordered to retreat into the jungles at Lubuk Kawah. So I went to the jungles and fought with weapons. The spirit of patriotism and independence, as well as loyalty to the cause firmed me up that I was willing to go into the jungles. Important thing is to gain independence. To me, after gaining our independence, then everything is solved.” – translated from BM on melayumoden.com Shamsiah poured her heart and soul into fighting for independence in her own way – it may not have been a way everyone can agree with, but it was a way she thought was best. So it’s sad, and with a reputation of ‘Malay communist’ you can imagine what kind of bad press she got… she was once accused of killing her own son!!

Ex Chairman of the MCP Musa Ahmad claimed she did it to avoid capture in the jungle. She denied everything of course and explained in her memoirs that she wanted to keep her baby but her superior convinced her to give the child up to a rich family for adoption. In 1952, she found out that three MCP comrades who were supposed to bring the baby to the adoptive family had killed it instead. Ughhh how much betrayal can a person handle?! 😥

Wahh, Malaysia got so many women tokoh but is so little known bout them?

Heck all these women were WARRIORS! Khatijah firing up the spirit of independence among Malayans, Suriani who was tortured by the Japanese but never backed down from freedom, Shamsiah who even braved the jungles to fight for Merdeka, and Aishah who became a women’s rights campaigner for many years in Malaysia after independence. Digging deeper into their struggles, these women not only fought for a Malaya free from colonisation… they fought for equality for women. “Khatijah only wanted women to be allowed to vote, the right to contest in the post against a conservative male-dominated UMNO leaders, and for better representation of women at a national level,” said Prof. Madya Datin Mahani Musa, Malaysian History Lecturer in University of Science, Malaysia (USM). As a figure who transformed the rights of women, her name is not present in UMNO history pulak!?

DAP female activist Rara Othman feels that the younger generation have been kept in the dark in a lot of the country’s TRUE historical events and it’s mostly male-dominated. She suggests there should be documentations of women and their struggles in history, like building a gallery in honour of these heroines.

“The recognition does not only have to be revolved around female fighters who are mainstream. Women’s organisations need to collectively stand up and urge the government to recognise all women activists.” – Rara Othman on Malaysian Digest

Share this article:
NAH, BACA:
Did this Malaysian just save the human race with a medical breakthrough?