We’ve all heard it by now, how Jho Low‘s the superstar partyboy who swindled a country, Hollywood and the world. Well, that’s what the book Billion Dollar Whale says anyway. You’ve also probably heard by now that Jho Low and his dad Larry have been slapped with charges by our police. But right, do you actually know what Jho Low’s been charged with?

Well as it turns out, Jho Low has been charged with just one thing so far: money laundering. He’s been hit with eight charges under the Anti-Money Laundering and Anti-Terrorism Financing Act, while his dad kena one charge for transferring USD56 million to his son. He’s been pretty quiet this whole time – seeing that he is playing the world’s most expensive game of hide and seek after all – but recently we’ve gotten some word from Jho Low and his lawyers thru a mysterious website that surfaced.

The creatively titled website jho-low.com appeared almost out of nowhere, filled with court documents, media reports and statements by Jho Low himself. We tried to find out who registered the website and where is it based, but it appears to have been registered thru a proxy with most info hidden. Interestingly enough, the website has been around since 2014. Also, you can buy jho-low.rocks for USD1.99 in case you want to.

But Jho Low’s new website actually has a purpose.

Jho Low wants to use the website to prove his innocence

In a personal letter on jho-low.com (which you can read in full here), he writes that a lot of the allegations surrounding his role in the 1MDB fiasco have come from ‘blogs, improper leaks, or unproven allegations’, all while never being allowed a chance to tell his side of the story. He maintains his innocence, and claims that there is no way he can provide objective info as everywhere has been ‘poisoned by gossip, innuendo and unproven allegations’.

As for the book Billion Dollar Whale and it’s author Tom Wright, Jho Low points out that the book seems to poorly link him to the alleged fraud, and that there’s no evidence that he’s responsible for the 1MDB scandal despite being alleged as the mastermind behind the whole thing. On top of that, he claims that he’s a victim of ‘guilt-by-lifestyle, and trial-by-media at its worst’.

But his website seems to fail at arguing his case according to some. Xavier Justo called it nothing more than a comic book, while Tom Wright also made a rebuttal to the claims Jho Low made on his site. We don’t think he meant Zunar’s comics tho. Image from Zunar

Jho Low’s points of a trial by media tho did make us think a bit. Quite a lot of stuff gets said about him in the news, social media and Whatsapp, so let’s actually take a look at some of the stuff that’s being said about Jho Low right now and explore the truth behind it.

This is actually FALSE, despite what your second grandaunt on your dad’s side said on Whatsapp. As it turns out, our police has actually applied for Jho Low to be placed onto the Interpol Red Notice list, but as of time of writing, Jho Low’s name is yet to be found on the list. The IGP however claims that this is due to the protocol that Interpol must do when assessing if a person should or shouldn’t be put onto the Red Notice list. The IGP’s excuse tho hasn’t been well received. DAP stalwart Lim Kit Siang says that the police’s failure to put Jho Low’s name reflects badly on the competence of our boys in blue, adding:

“It is not as if the international 1MDB corruption and money-laundering….happened only yesterday. It is not just because last month, the Putrajaya sessions court issued an arrest warrant against Jho Low and his father, Larry Low Hock Peng to enable both to be repatriated and face money-laundering charges in relation to 1MDB,” – Lim Kit Siang, as quoted by The Sun

But, in the event he does get put onto Interpol’s wanted list, you can read about what happens to Jho Low in that event here.

Here’s the thing: just about every other day, we get a different possibility of where he’s hiding. We’ve seen news reports that claim he’s in Taiwan, China, Macau, Saint Kitts and Nevis, Dubai, Indonesia, Phuket, Hong Kong…. okay we think you get the idea. How does he get around so easily despite being such a wanted man tho?

Well, according to some reports, there may be a chance that he’s using a passport from a different country. This is highly likely as his Malaysian passport has already been voided. The most likely passport he’s probably using to get around now is a St Kitts and Nevis passport. The West Indies island may be small, but actually has a govt run program called Citizenship-By-Investment where you pretty much get a passport from the island after ‘investing’ some money into the country.

Other than that, there’s also the possibility of plastic surgery to make him less Jho Low and more Dwayne Johnson. No, we really aren’t kidding. 3. The US is taking back all the stuff Jho Low bought

This is actually true, and we did a story on it too last year. You can read the full story here, but long story short, after the US Department of Justice did some digging and found a bunch of stuff bought with dirty money, and also listed out things they wanted to seize as part of their investigation.

Among the stuff they found was bought with Jho Low’s dirty money was some jewelry for the ‘wife of Malaysian Official 1′. And altho people from supermodel Miranda Kerr to movie superstar Leonardo Di Caprio had to return the stuff they got from Jho Low, this gift of 27 pieces of jewelry to MO1’s wife was never listed as something that the DOJ is seeking to seize. We now know based off Billion Dollar Whale that the 27 pieces of jewelry given to MO1’s wife referred to Jho Low’s gifts to Rosmah. We can’t be the only ones who think it’s ironic he played a swindler in Wolf of Wall Street. Image from Hollywood Reporter

Now, despite these allegations, Jho Low has maintained his innocence in the 1MDB saga. That leads us to the question:

How can Jho Low actually wriggle himself free from the charges?

Jho Low has already tried to find a way to get authorities to let him go. Back in June, it was reported that Jho Low had sent Prime Minister Mahathir an offer where he would help authorities locate where the money went in return for immunity from prosecution. Needless to say, Dr M rejected Jho Low’s offer, stating:

“I’m quite sure the kind of incentive he would readily accept is that he would not be prosecuted … But we can’t do that. It’s against the law,” – Prime Minister Mahathir, as quoted by Straits Times

Well okay, so he’s not going to come back and help out. And he’s got the DOJ investigating him for embezzlement while freezing and seizing his assets. And he’s been charged by local authorities for money laundering. Maybe it’s kinda safe to say Jho Low is….

We won’t know for sure until something actually happens to him of course, but he might still find a way to wriggle himself free. Back in 2016, when the first DOJ document regarding the 1MDB scandal first came out, Jho Low and Riza Aziz were the two main characters explicitly named by the DOJ (the other one was a certain Malaysian Official 1). We asked the DOJ why were they named and others not, and were pretty much told that it’s because the DOJ are absolutely sure that they’re most likely to face criminal charges.

Riza Aziz however, remains free – for now anyways as investigations continue. He remains free despite being named in the DOJ document as he and his company, Red Granite Pictures agreed to pay a settlement towards the US govt, believed to be around USD60 million. There’s no guarantee the US would offer Jho Low a similar settlement deal tho, especially since the superyacht Equaminity isn’t in their hands. 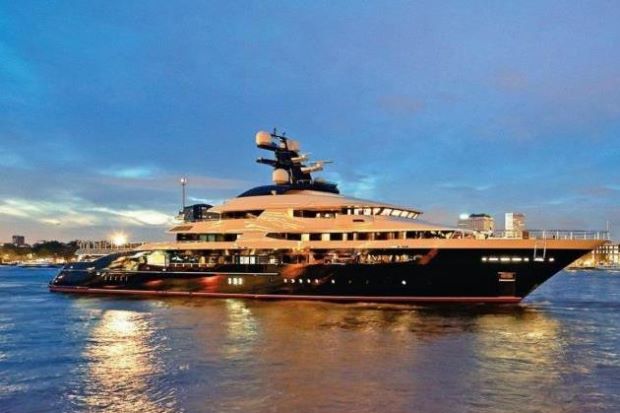 Now that’s a big boat, could even say it’s pretty bl-oated. Image from The Star

In any case, trying to reach for a settlement with the US would only fix his woes…. there. He’s already been charged here too, while failing to get an immunity deal with Mahathir. He could still try to get acquitted by raising reasonable doubt into the case – perhaps that’s why he points out the supposed weak links Billion Dollar Whale makes in trying to frame him as the 1MDB mastermind. However, like we mentioned earlier, with the DOJ document naming him in their investigation, the paper trail does seem to lead to him.

[UPDATE 24/9]: Well, as it turns out, Jho Low actually is trying to seek a settlement with the US govt. According to Sarawak Report, Jho Low’s team of lawyer extraordinaires are trying to reach a deal with the DOJ as by doing so, he may get to keep some of the stuff that the DOJ is trying to seize. The DOJ seems to be okay with the settlement deal too if it means they can turn their attention to other parts of the scandal, such as the role of the Goldman Sachs bank in the scandal.

But for now at least…

We’ll just have to keep waiting on his next move

Yeah, well the story will need it’s main characters for it to continue. Riza Aziz as mentioned earlier has already settled with the US govt, while his stepdad Najib has been slapped with numerous charges ranging from CBT to money laundering. But Jho Low remains in hiding, and until he comes back we won’t know what’ll happen to him.

For our country’s sake tho, we would love to see some closure to the 1MDB tale, and we know most of us can’t wait to see an end to what has been a roller coaster of a scandal.