As we all know, the 14th General Elections will be held on the upcoming 9th of May, which is a Wednesday. For most Malaysians working far away from where they’re registered as voters, this is quite an inconvenient affair, and Zahid Hamidi had even allegedly told Malaysians working in Singapore that it may be best for them to not come back and vote if they can’t get a day off. With these hardships, some of us might be wondering if it’s worth braving all these just to cast one vote, which may or may not matter in the grand scheme of things.

We’ve already talked about how people in some constituencies have more power behind their vote due to some constituencies having a lot more voters than others, like how the P125 Putrajaya seat had 15,791 voters and the P109 Kapar seat had 144,159 voters in the last election. In theory, each Putrajaya voter had almost ten times more voting power than Kapar voters. You only need around 8,000 votes to win in Putrajaya, but you’d need more than 72,000 votes to win the Kapar seat. This is an extreme (but true) example of how the power of each voter differ between seats, and this power gets more important in what we call marginal seats.

So what are these marginal seats? Equal area representation of the Dewan Rakyat members from GE13. Img from Wikipedia.

First, a little bit of background. Malaysia is basically run by a bunch of guys in the Parliament, and membership is limited to 222 persons, who will be chosen by the people in the 222 constituencies (voting areas) they represent through an election every four to five years. Malaysia uses a system called the ‘first-past-the-post‘ system, where the candidate with the highest amount of votes will win. This would mean that if a constituency where only two people are contesting, to win one of them will have to get more than 50% of the votes.

For constituencies with more than two people contesting, things get a bit weirder. Say that in a particular constituency, there are three candidates representing three different political parties to vote for (we’ll call them A, B, and C). Say that 40% of the people in that constituency votes for A, 39% for B and 21% for C. A will win the seat, even though 60% of the voters did not vote for A. In these cases, where the winners can be said to have barely won, there’s a reasonable chance the party will lose the seat in the next election. This seat is then said to be a marginal seat. 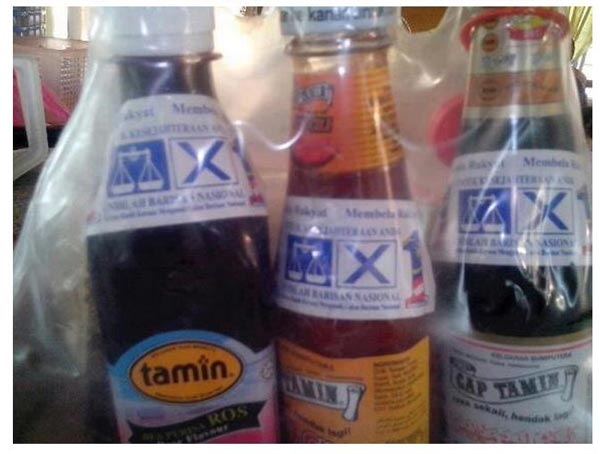 Due to their volatility, people living in marginal seats have a higher chance of receiving freebies and gomen visits. Pic unrelated. Img from Tari Boegil Abg.

Generally, voters of a marginal seat are more balanced in their political views, which means that the seat is very likely to change hands (as opposed to ‘safe’ seats, which tend to be ruled by the same party year after year). We didn’t have a formal classifying system, so for the purposes of this article we’ll be modifying the Australian Election Commission‘s definition, which classifies seats won by

However, since this definition won’t be accurate for seats where there are three or more parties fighting for it, we’ll classify a seat as marginal when the difference in the votes received by the winner and the runner up is less than 12% of the total amount of votes. We then combed through GE13’s data found on Wikipedia and identified 81 of them:

So without further ado…

Here are Malaysia’s top 10 most marginal seats, based on GE13’s data

First, a disclaimer. Since the last election, more people have signed up as voters, so these seats may not be marginal anymore for the upcoming election. Also, our Election Commission did some shifting around of voters recently, and various activists and politicians have alleged that this change will benefit the current ruling government by addressing the marginality of these seats, so we’ll be highlighting the seats where the number of voters have been changed as well.

If you’re not sure which constituency you belong to, you can check through this link and look at where the red arrow is pointing for your constituency.

Screengrabbed from the results at pengundi.spr.gov.my.

Now that you know where your constituency is, here are the marginal seats. From 1 to 10, the seats are ranked from most marginal to least marginal, and from 11 onwards we just classify them according to state to make it easier for ugais to check your constituencies.

For this list, the party that won and by how many extra votes will be in parentheses next to the seat name.

NAH, BACA:
Planning to vote in GE14? Your area might not even exist anymore!

So from these, you can see that a few dozen people can make or break a party’s hold over a constituency, so if you’re voting in any of these places, your vote is probably a big deal. However…

If your seat isn’t marginal, there’s other stuff you can do besides sitting at home 🙂

With the polling day set to be in the middle of the week one month from when it was announced, a lot of people had complained about the arrangement, which was said to purposely discourage voter turnout. In addition to that, The Star interviewed some youths a while ago and found that one of the reasons for not voting or registering as a voter was that they’re not sure whether their one vote will make any difference. One of them was disenchanted as the candidate who won in his constituency did so by a large margin, so he felt that it won’t make much of a difference if he was to vote.

So if you’re certain that your area is a safe seat and your vote won’t make much of a difference, you might consider joining in by helping other Malaysians who need to vote. One way you can do this is through the #CarPoolGE14 campaign on Twitter, where Twitter users driving back to vote offer empty seats in their car for anybody going the same way who might need a ride. This eventually evolved to a fully functional website offering the same thing, but in a more organized manner. There’s also the #PulangMengundi campaign, where people and organizations fund other people who want to go back and vote but can’t afford it. You can also consider volunteering as either a PEMANTAU or a PACABA. A PEMANTAU is basically an election observer that makes sure that there’s no funny business going on during the election and campaigning process, and you can sign up and find out more about it through this link.  A PACABA, on the other hand, stands for Polling Agent/Counting Agent/Barung Agent, and basically they help out during elections and ensure a fair process.