So recently, The Star has gotten itself in hot soup over last Saturday’s front page. If you haven’t seen it yet, here it is. Yes, you can totally see how it might be funny to some, and possibly outrageous to others. And sure enough, it was, with both comical and enraged respondents from social media, and parties like Perkasa, UMNO and PKR.

In fact, the uproar was big enough that eventually the Home Ministry had to step in, and ask The Star’s editors why its publication license shouldn’t be revoked. This eventually resulted in The Star’s two top editors being suspended pending further investigation, and just recently, 6 of their journalists being investigated for sedition

And Malaysian journalists have responded, condemning the action, and rising in solidarity for The Star.

“The IoJ is of the view that such heavy handed action is highly disproportionate to the perceived offence, which could arguably boil down to editorial oversight as opposed to any deliberate attempt to sow racial and religious divisions as claimed by critics. We also note with deep concern calls made by certain parties for The Star to be suspended, as such a move would be yet another nail in the coffin of press freedom in Malaysia, which is already severely curtailed by archaic laws and hostile treatment by many who hold positions of power.” – Institute of Journalists Malaysia (yes, CILISOS is a member)

“Geramm, however, stands by our believe that the Printing, Presses and Publication Act 1984 is an archaic legislation which can and has been abused to silence the media. Suspension of any media outlet – even for just one day – would ultimately affect its entire operations and victimise all of its staff, majority of whom were not even involved in producing the allegedly offensive content.” – GERAMM

But if it was a mistake, then why are journalists so angry?

It’s hard to monitor stuff when you publish everyday

Most newspapers are published daily – and contain hundreds of stories and ads. CILISOS, by comparison publishes one article a day, and even we have had our fair share of mistakes. Image from Marketing Interactive of a badly placed luggage ad

Aside from the above example from the Straits Times, there have been other cases, like a local Tamil newspaper putting an alcohol ad next to an article about students doing well. Overseas, this happens quite regularly. Check out these sometimes hilarious results… And as far as we can tell, no one got fired, and no government inquisitions were made.

So why The Star kena so bad?

On the same Saturday that the Terrorism headline came out, here’s what two other daily newspapers published… 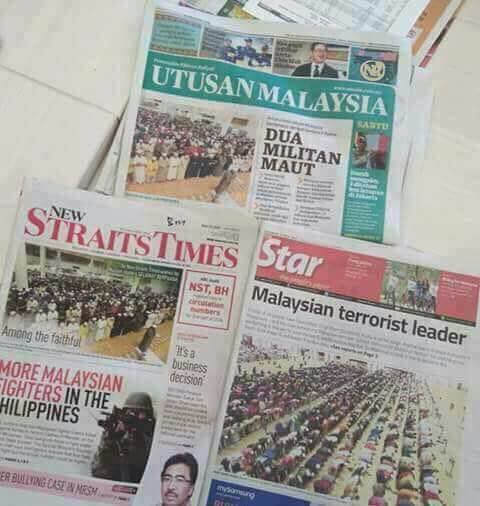 As you can see, they all had similar headlines, and similar featured images, although to be fair, their borders and layout were clearer than The Star’s. In fact, Malaysia’s most artistic troll, Fahmi Reza, did a simple layout correction on The Star’s homepage, and it actually looks alot less problematic. Our local laws are a little bit vague Ironically, alot of this started with The Star, way back in 1987, when Tun Mahathir was in the midst of arresting a bunch of politicians, lawyers, activists and even students during Ops Lalang. In the aftermath of that operation, amendments were made to the Printing, Presses and Publication Act, which requires printed media to register with the Home Ministry. And each year, they need to renew their license. Without this, they can’t publish – and it can be revoked at any time for “publications that are likely to endanger national security interest or create social unrest.”

As with many Acts and laws in Malaysia, the wording is a bit vague, and people have noticed that the application of these laws is sometimes less than even-handed. The above headlines were pulled from a user in social media, who noticed that just after Thaipusam 2017, The Star published this article about Gang members on the run, with the Batu Caves celebrations picture next to it (ugaiz really need to check your pictures a bit more). Protestors in Yangon. Image via sea-globe.com

In the aftermath of Ops Lalang, when The Star had been shut down, Bapa Merdeka, Tunku Abdul Rahman famously commented…

“We are on the road to dictatorship” – Tunku Abdul Rahman

And it doesn’t bode well for ANY country, if press freedoms are curtailed. In an UNESCO study, it seems there’s an almost direct relationship between press freedom and the progress of a country.

“Whichever indicator is used, a country cannot have good governance (essential for long-term economic development) if it muzzles its press. Other than Singapore, no State combines a low level of press freedom with high-quality governance for all the indicators studied. Governments cannot be held politically accountable and citizens cannot enjoy wide-ranging civic and political rights unless there is a free press; without it, oversight and criticism of abuses will not be possible or even thinkable.” – UNESCO Press Freedom Study pg88

Unfortunately, there are similar laws to our PPPA in Thailand, Vietnam, Myanmar and pretty much every other country in SouthEast Asia. While the UNESCO document does indicate that Singapore (who’s media laws are even stricter than Malaysia) is an exception in terms of press freedom correlation to good progress, every other country seems to be suffering at various degrees due to the lack of press freedom.

One other exception is Indonesia – in 1997, just before he stepped down as president, President Habibie removed the need for publications to be licensed by the government. In fact, he actually specifically made a strong statement towards press freedom.

Instead of the Home Ministry getting involved, they have a Press Council, made up of journalists, and everyday Indonesians, that resolves disputes like defamation, sensationalism and other things, reporting that up to 97% of disputes get resolved amicably. What The Star did was mostly likely unintentional. However, as a result, they have lost a significant chunk of their fanbase. So even without the involvement of the Home Ministry, mistakes like these have their own consequences.

With the recent shift to Islamic fundamentalism in Malaysia, there is a sentiment that the government wants to appeal to its Islamic conservative base leading up to the next general election, which might be why the Home Ministry felt the need to get involved.

At the end of the day, media freedoms on print had already been compromised for years, which was what drove many Malaysians online in the first place. Recently though, we’ve covered how The Star has been quite progressive in its reporting (especially with R.AGE), as well as its online presence.

However, with proposed laws to monitor news websites in the near future as well, there’s a danger that they’ll eventually find a way to use websites as nasi lemak wrappers in future.